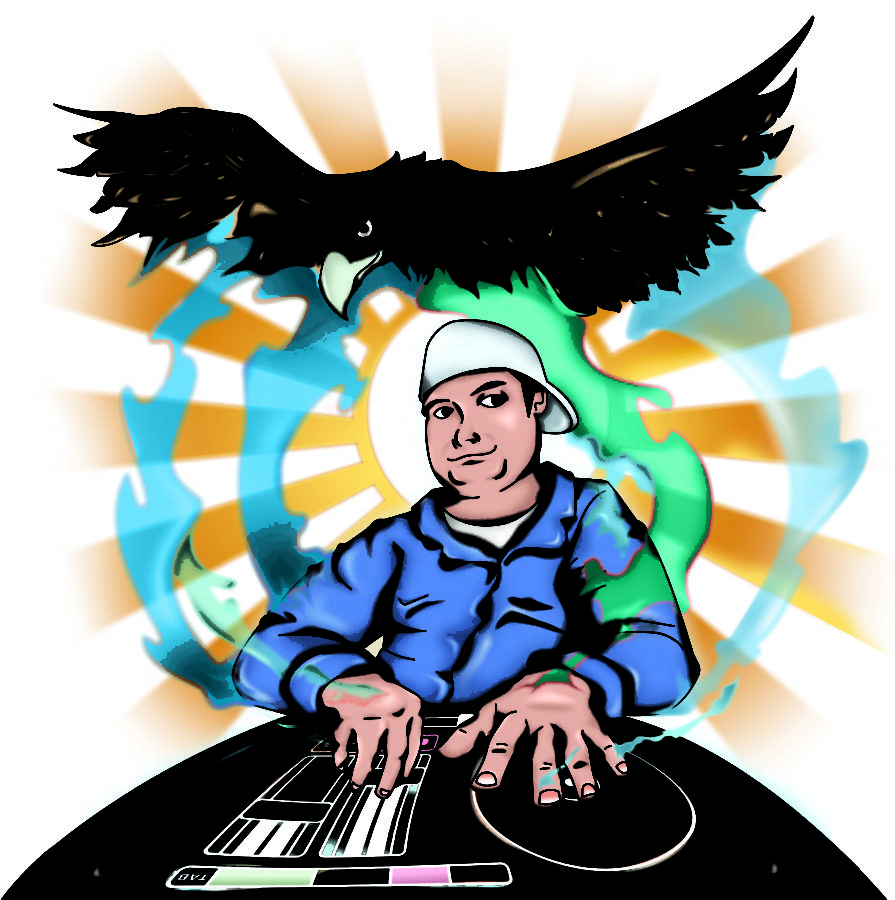 Alex Campbell’s laughter still echoes throughout the Oak Leaf office. His music still reverberates through every carefully mixed beat. His inspiration still shines through the actions of his friends, family and fellow journalists.

Campbell, 38, was known as a “warm teddy bear of a man,” who was a caring friend, passionate writer and loving father.

The former Oak Leaf Sports Editor and professional disc jockey died May 4 after crashing his vehicle into a tree off of River Road near Korbel Winery in Guerneville. Friends and family members mourned and honored Campbell at a service May 10 in Santa Rosa.

“It’s such a shock to me that he’s gone; it doesn’t even seem real,” said Lashunta Edwards Hoover, co-parent of Campbell’s daughter. “I couldn’t ask for a better friend and father.”

Overwhelmed by the tragedy, Campbell’s brother Joseph Vescovi spoke about how much Alex meant to his family and friends.

“He was a strong-willed person who knew what he wanted and was trying to do the best he could at it,” Vescovi said. Campbell enrolled at SRJC after attending Haskell Indian Nation University (HINU) in Lawrence, KS.

“He helped pay for his daughter, Iyana Campbell, who is graduating from Montgomery High School this year,” Vescovi said.

Campbell’s loved ones remember him as passionate about everything he did. His top priority in life was being the best father he could be to his daughter.

According to Hoover, Campbell promised her before Iyana was born that he would always be a good dad, no matter what happened with their own relationship.

“Alex would always work around his schedule to make sure he could be there for Iyana,” Hoover said. “He definitely fulfilled that promise.”

Hoover also said that Campbell and his daughter were close. He used to structure his schedule around Iyana so he could make sure she got to her basketball practices, and would take her places she needed to go.

A sorrowful Iyana Campbell reflected on how she will remember her father.

Hoover explained how Campbell was highly attuned to his Native American ancestry. When Iyana was born, Campbell wanted to give her a Native American name. Both Hoover and Campbell decided on the name Iyana, which translates to “Eternal Blossom.”

Campbell worked as a DJ in Guerneville and San Francisco. He was a sports writer and editor for the Oak Leaf from fall 2011 to fall 2012. He moved from Santa Rosa to Lakeport last spring to live in a house his tribe provided for him.

Campbell was well-liked among current and former staff members, who remember him as a kind, gentle and all-around nice guy.

“When he walked into a room, he noticed you and said hello. He wouldn’t say ‘Isabel,’ he’d say ‘IsaBEL’ with attitude and feeling. You’d always feel like you were a good friend of his and he was so happy to see you,” said former Oak Leaf Co-Editor-in-Chief Isabel Baskerville. “He made you feel comfortable and at home with him, which for me is unusual because I’m really awkward around people.”

Former Oak Leaf Co-Editor-in-Chief Spencer Harris admired Campbell’s eagerness to learn and ability to take criticism. “He was always on my case to learn. Other people, you have to say ‘Hey, you’re doing this wrong.’ Alex was like, ‘Hey man, explain what I’m doing wrong,’” Harris said. “He was really motivated to learn the material. That was really refreshing for me.”

Harris also noticed the effect Campbell had on others. “Every single time you stepped around Alex, you felt motivated. He was a positive vibe type of person.”

Harris recalled one day after a long production weekend when it was time to distribute the newspaper. “I was very mad. I was not going to do this. This is below me. I’m the sports editor,” Harris said. “Alex grabs two stacks of newspapers and says, “Come on bitch. If you want your stories to get out there, you got to distribute them out there.”

Former Oak Leaf Staff Writer Leah Mae Phillips wrote on Campbell’s Facebook wall after she heard the news on his passing: “My heart won’t stop aching. It hurts to know that I didn’t realize how much you impacted my life until you were gone. I will never ever forget or let go of everything you taught me. I was scared and questioned my ability to write sports but you always had confidence in me and taught me so many little things!”

While Campbell was on the Oak Leaf staff, colleagues respected him as a knowledgeable sports writer, a dedicated editor and an approachable person with a calm and friendly demeanor who always had a smile on his face.

Former Co-Editor-in-Chief Michael Shufro said Campbell was always there for him and the paper, especially on late production nights.

“It wasn’t about him being there to fine-tune the paper. He was there to keep me awake, to get me through the long, dark hours of the night. He was just that kind of guy,” Shufro said.

Campbell was also a legend amongst former, current and incoming Oak Leafers after a famous incident when he covered a plant sale at SRJC.

“We sent him to cover the plant sale, which he did, and brought back a plant, which he left in the Oak Leaf. Then, he disappeared and we named the plant Alex,” said former Co-Editor-in-Chief Benjamin Gruey. “It got sick in the Oak Leaf, so Anne took it home. Once the plant left, Alex came back and kicked ass.”

Oak Leaf Adviser Anne Belden said Campbell was one of her all-time favorite students who worked harder than most and improved more than most.

“He literally started from scratch in journalism and worked so hard to get command of the basics. He would come into my office and have me explain things like comma splices until he fully understood them. Then he’d edit and re-edit his stories until they were perfect,” Belden said.

By the time he left the Oak Leaf, he was a veteran reporter and editor who instructed and inspired others. “On a personal level, he was the nicest, most thoughtful guy in the world. Every day before class last year, he’d start my tea water boiling, knowing I’d be running in and out the door and wouldn’t have time to make it myself. I could always count on Alex,” Belden said.

Family members and friends gathered May 10 at the Friedman Center in Santa Rosa for Campbell’s memorial service where they shared tears, laughter and stories about Campbell’s life.

The service began with the pastor sharing a prayer with the audience. Shortly after the prayer, six people took the stage and gave speeches about what Campbell meant to them. After the speeches, a Native American spiritual leader of a Ukiah Pomo tribe sang a prayer to send Campbell’s soul to rest in peace with his ancestors.