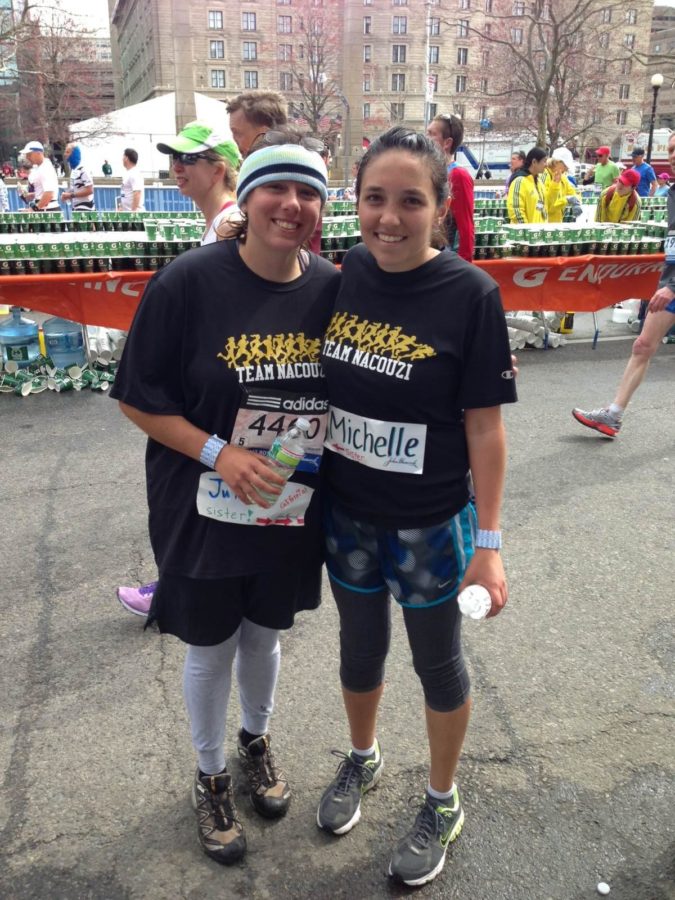 SRJC student Julie Nacouzi and her sister Michelle pose for a picture after finishing the Boston Marathon April 15, moments before the explosions.

While the entire country watched the coverage of the Boston Marathon bombing in horror, Santa Rosa Junior College student Julie Nacouzi and her sister Michelle witnessed the tragedy from over their shoulders as they escaped the race with their lives.

“We were really wobbly and incredibly tired after we finished the race,” Michelle said. “We were only about 100 yards away when the first bomb went off.”

The Boston Marathon started the way it always did, a beautiful sunny day in the middle of April with thousands of runners from around the world racing 26.2 miles in the country’s oldest marathon. The finish however, was an unexpected one of historic proportions, and the Nacouzi sisters were right at the epicenter.

“We heard a loud boom, and all we saw was a big cloud of dust,” Michelle said. “We thought a building fell or something, but then we heard the second bomb so we had to leave with only our medals and we couldn’t get the massages they give after racers cross the finish line.”

Exhausted, aching and completely depleted of energy, it was difficult to get their thoughts straight with all the mayhem. But for members of the Nacouzi family, their attention quickly turned toward the safety of their mother Stephanie Nacouzi, who was cheering them from the stands while the girls raced. With the Nacouzis, family always comes first, and these conditions never wavered even in the midst of a crisis.

“My first thought was that my mom was in the stands when the bombs went off, so I thought she could have easily been caught in the blast,” Michelle said. “I called her immediately, and luckily she answered right away, so I was relieved.”

Once they located their mom, they quickly retrieved things and used Boston public transportation to head to the airport. Tension was high among the sisters, as they figured airports are a common target for terrorism. After they boarded the plane, they heard reports about the shutdown of all airports in the area as a response to the bombings at the marathon. Fortunately for the Nacouzis, they were still able to catch their flight and make it back safely.

“I was kind of scared of going to the airport because I knew that airports are targeted a lot, and I was a little nervous after what just happened,” Michelle said. “After we got on the plane, I was worried they were going to stop it because they shut down the airports, but luckily we got to leave when we did.”

It was a bittersweet return to California for the sisters, as they are fully cognizant of their fortune in escaping the bombings alive. While they certainly felt the impact of the tragedy while they were there, the Nacouzis were hit hardest after they made it back home.

“It was really tough for us to see the victims on the news,” Michelle said. “The word I would use to describe what happened is ‘surreal’; it made national news, so it’s crazy to know we were a part of it.”

When Julie Nacouzi returned to school, a teacher saw her name in the news and asked her to describe her experience to the class. She hadn’t anticipated the sudden spotlight. “It was a little embarrassing, but I am just happy to be OK,” Julie said.

The Nacouzis can only grow stronger going forward.

Marisa Corley, a family friend, knows how strong the bond is between Julie and Michelle Nacouzi.

“Julie is pretty interesting. She doesn’t like to drive anywhere,” Corley said. “When she would visit Michelle in Berkley, she would ride her bike all the way from Santa Rosa.”

Julie isn’t the only Nacouzi mighty enough for the 80-mile bike trek to the East Bay. According to Michelle, their mother joins in on the fun as well.

“Yeah, it’s about 80 miles because she (Julie) has to go through Napa,” Michelle said. “My mom has done it too!”

In the end, Julie and Michelle know they survived a terrifying and historic moment. They are grateful to be safe, and plan to continue racing in the future.

“You can never plan for anything like that to happen, so I just really appreciate knowing what to expect every day now that we’re back,” Michelle said. “We are going to run the Dipsea marathon in June, which is in Mill Valley. It’s the second oldest race in the country, and the Boston Marathon is the oldest, so it’s an honor to be able to race in both.”