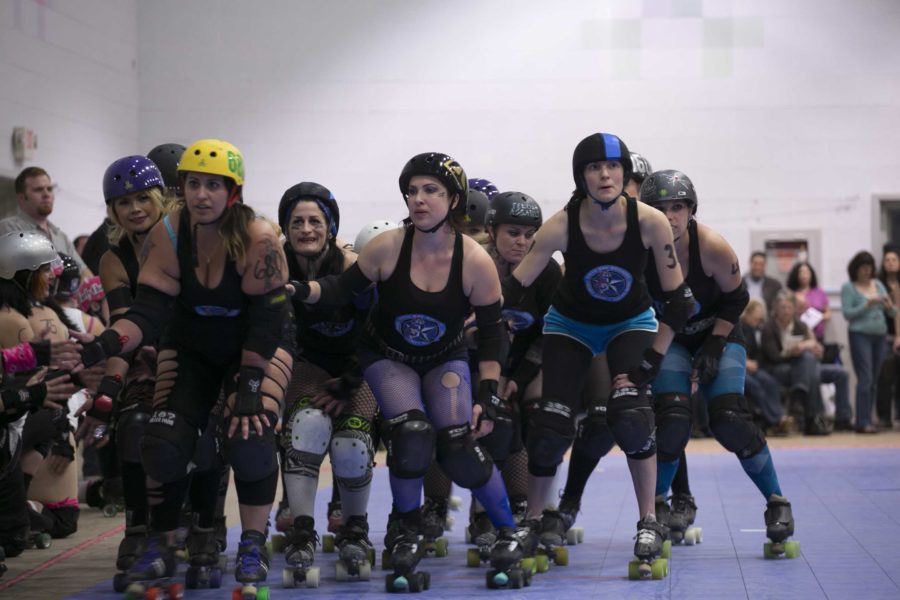 Sonoma County Roller Derby skates as a massive wall around the track in a display of camaraderie and exhibition of strength while individual skaters are introduced over the P.A. Saturday night at the Santa Rosa Veteran’s Building.

First-time bout attendee Jesse Anderson summed up the public perception of roller derby this way: “Basically, I was hoping to see some tatted-up chicks beat the crap out of each other.”

Throughout the rounds, even when the waning seconds ticked away, the sellout crowd frequently cheered and leapt to their feet as jammers “Lady Sparks” and “Butter & Jam” slid through the wall and past the opposing pivot position to score points.

“Penalties killed us,” said “Sugar Snappy,” playing the wall on the flat track. She added the team is undergoing membership changes this year, so the close loss stung less than expected. (Jammers can score dozens of points in a single two-minute round.)

Sugar Snappy, who puts maple syrup in her coffee, played other sports for years until she discovered and joined a roller derby team while living in Canada.

“There’s definitely drama that happens, even in men’s and co-ed’s derby, because of the clash of personalities,” she said. “If you have an organized and well-delegated league, you’re able to utilize personalities in a positive manner.”

“It’s not the same as roller derby at all,” she said. “But I’d definitely say it’s as challenging in terms of agility. She used to do a move called ‘The Death Spiral.’”

All roller girls share an overriding sense of fun and sheer joy in the pursuit of their chosen sport, extending to participants of all ages.

Sonoma County Roller Derby’s Junior League, which scrimmaged during the halftime break of the opening bout, accepts girls and boys between 9 and 17.

“It came from a friend’s dream and it felt more like my personality,” she said. “I’m really good at roller derby and I get pretty crazy when I’m out on the track, so I should be in a straight jacket.”

At 17, she’s in the last of her four years in Juniors, but Str8 Jacket plans to move up to the North Bay Bruisers, the league’s B team.

“I use roller derby as therapy to get my anger out,” Str8 Jacket said. “It’s really good for me, and my parents see an improvement in my attitude.”

“He said, ‘Either ref and still skate or don’t go out at all’,” General Drama said.

The junior team stands at 11 as they continue to recruit so they can compete with a full complement of 14 players.

Both junior and regular roller derby suffer from misunderstandings in the public eye.

“The most common misconception,” Sugar Snappy said, “is that we’re all just really mean and hardcore.” Two members of the North Bay Bruisers work for different counties in child welfare positions, a far cry from the sport’s fanciful reputation.

“We might look rough and tough on the track,” Butter & Jam said, “but we’re actually really loving and supportive of each other.”