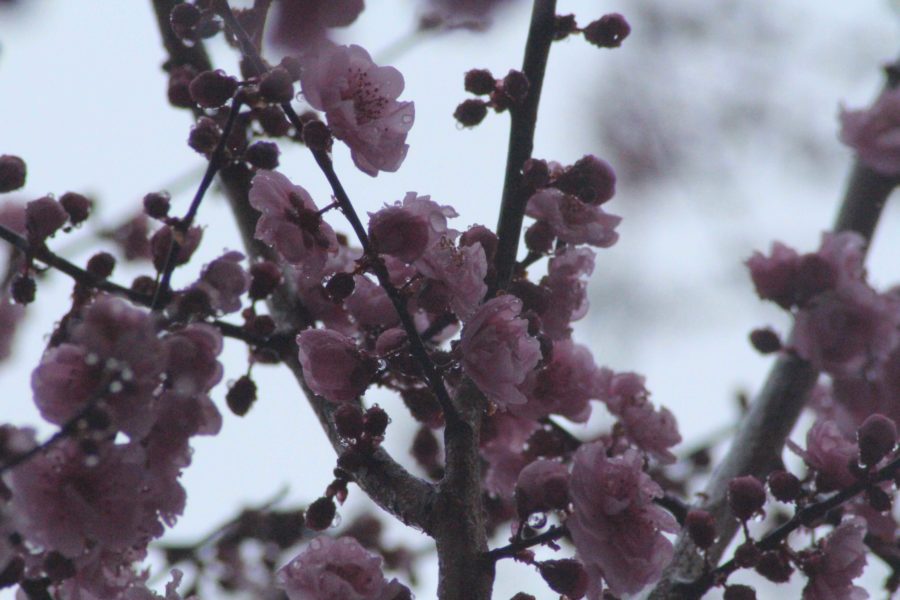 Cherry blossoms remain in their budding phase right before they bloom as the early spring approaches Sonoma County.

Cherry blossoms burst forth, bluebirds and robins rejoice in song. Spring is here, but the month is January. Mother Nature is off her rocker.

At least a decade ago, scientists the world over agreed repeatable experiments showed climbing temperatures on earth, with potential for environmental catastrophes in every region of the globe. Even Sonoma County exhibited signs of possible warming patterns in recent years. Marine lab students noticed intertidal southern species invading local waters.

Increased average temperatures over decades concern scientists, Brumbaugh points out, but the extremes at either end of the averages range farther apart than ever before.

“Hotter, drier summers. Warmer, wetter winters,” he said. “Boom and bust years, where we get no rainfall or more rainfall than we can handle. Those sorts of scenarios seem to be playing out the way that was predicted.”

“But when we’ve started to see so many of these statistical anomalies happening more frequently, not just locally but nationally, globally,” Brumbaugh said, “then that suggests things are changing and shifting.”

The arctic ice cap melted enough to open up the fabled Northwest Passage, recently navigated by a trio of international sailors. Monarch butterflies alter their migration routes to follow air currents toward the new, accelerating temperatures.

“Fog is really a critical component of our ecology here,” Brumbaugh said, noting that a recent Pepperwood Preserve project examined climate change’s effect on plant life. The study recorded fewer foggy days than in summers of past decades.

Redwoods require fog for 30 percent of their total moisture intake.

“They have to have it,” Brumbaugh said. “If you lose summer fog, you lose the redwoods and everything else associated with them.”

The increasing temperatures bring other surprises, too.

“Is it out of the ordinary to see bluebirds around this time?” said SRJC student Samantha Watkins.

Watkins and Sparks saw a nearby bluebird on the way to a morning class. “It was a fat, happy bluebird,” Sparks said.

“There’s been odd stuff going on for awhile,” said long-time resident Anthony Mark Raymond. “Different wind storms and patterns that don’t seem to fit in. Sometimes we get barely any rain, then all of a sudden, downpour.”

“We’re having cold periods with snow followed by warmer rain followed by snow, and that rain melts all that snow,” said Katie Gerber, Department Chair of Earth & Space Sciences.

California’s Department of Water Resources estimates the state draws a third of its water needs from the Sierra Nevada snowpack, which melts gradually over spring and summer. Rising temperature trends speed up the process, advancing the runoff’s arrival and handicapping storage efforts. The DWR cites scientists’ expectations for a 25 percent snowpack decline by mid-century.

“Planners and water agencies are thinking about this and trying to figure out where they’re going to get more water,” she said.

Rising global temperatures may or may not contribute to extreme weather events, but years ago scientists predicted the  increasing power of hurricanes as the storms’ quantity levels out.

“It’s very difficult to say hurricanes are attributed to climate change,” Gerber said. “There are so many other things that affect weather, a lot of it we don’t completely understand.”

El Niño and La Niña ocean cycles impact precipitation and temperature patterns, as do sandstorms off Africa. The latter may influence whether hurricanes development or not and how destructive they become.

Many factors complicate scientists’ ability to dissect the influences of climate change, but some evidence can’t be ignored.