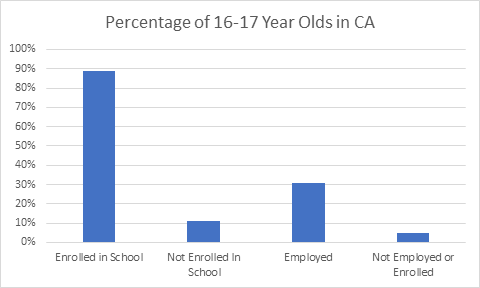 According to the U.S. Census Bureau, 31% of 16- to 17-year-olds are legally employed and paying taxes in California, and 6% of those teens are working and not enrolled in school.

Proposition 18 would allow 17-year-olds to vote in primary and special elections if they turn 18 at the time of the next general election. Upon approval, California would be the 19th state to adopt this legislation.

Supporters say Proposition 18 will encourage young people to take an early interest in elections. “This has strong potential to boost civic participation amongst California’s youth voters, a demographic that is very underrepresented when it comes to voter turnout,” said the proposition’s author, California Assemblyman Kevin Mullin.

Mullin and his father Gene Mullin, a former assemblyman and civics teacher, attempted to get this bill on the ballot three times.

“California is behind the curve when it comes to the issue of youth civic participation,” the younger Mullin said. “Approximately half of states already allow 17-year-old primary and caucus participation. After many attempts at this measure and coming up short on votes, I believe that its time has finally come.”

Opponents of the bill claim 17-year-olds lack developmental logic and maturity required to vote in elections.

Ruth Weiss, co-founder of the Election Integrity Project California, is the prime opponent of Proposition 18. In an opinion piece for the San Diego Union-Tribune, Weiss described how California does not hold teens accountable to adult standards in the penal system.

“Clearly, California law has reflected an understanding of the scientific evidence that such ability is connected to the biological and age-related fact of brain development,” Weiss wrote. “The agreed-upon age of reason, both statewide and nationally, is 18.”

Weiss said 17-year-old students will be influenced by adults and blindly vote to appease them. Would a few months before legal adulthood make a difference?

“An enormous difference. Unlike most 17-year-olds, most 18-year-olds are at least partially in the workforce, developing responsibility for themselves and their lives, and surrounded by a more balanced dialogue regarding societal issues,” Weiss wrote.

“I’ve met incredibly intelligent and mature teenagers, and throughout my life I’ve known incredibly unwise and immature adults,” Vogt said. “So, this argument falls apart for me. I firmly believe that if you are old enough to work and pay taxes, then you should be able to vote.”

According to the U.S. Census Bureau, 31% of 16- to 17-year-olds are legally employed and paying taxes in California, and 6% of those teens are working and not enrolled in school.

Veronica Navas, 17, thinks she should have the right to participate in elections. The Sonoma County high school student said passing Proposition 18 will define her future and those in her age range.

“My political views are very different from my parents,” she said. “I wish I could vote in the upcoming election. Many think 17-year-olds are not mature enough to make their own decisions. I have two jobs, pay bills and handle my car payments on my own. Think of how much more can change if my age group was allowed to vote?”

It’s important to remember Proposition 18 doesn’t give all 17-year-olds voting rights. Only those who would turn 18 by the next general election would be considered eligible.

“Perhaps if this is a success, it should be extended to allow 17-year-olds to vote in general elections, too,” he said. “I wouldn’t get my hopes too high for voter turnout. When the voting age was lowered to 18 in the 1970s by a Constitutional amendment, young people didn’t turn out the way politicians believed they would.”

For more information on Proposition 18, see California’s voter guide for the 2020 general election.