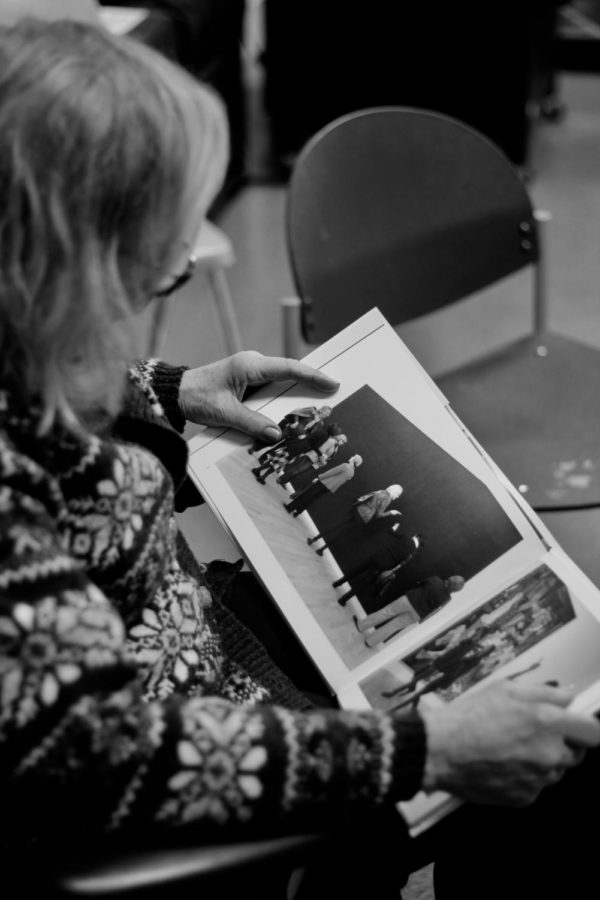 For the past 31 years, Renata Breth passed on her passion for photography to Santa Rosa Junior College students.

Breth now bids adieu to her position as the only full-time photography instructor at SRJC, and worries that the photography program she’s helped build for decades will suffer. “I hope soon have enough funds to hire someone full time.”

Breth’s tenure at SRJC coincided with perhaps the most rapid technological advances in photography in the last 100 years.

Indeed, the SRJC photography program has come a long way from the Kollege Kamera Klub of 1928 followed by the Lens and Shutters club of 1934.

In 1935 four Santa Rosa Junior College students under the supervision of Dr. Royal F. Sessions employed an airplane, infrared plates and a camera to photograph Mt. Shasta and the moon, or so says a story printed in Volume IX of the Oak Leaf.

It wasn’t until 1954 that the photography lab moved out of the science building to its new home in the Coop, where much like today in the showcases lining Analy Hall’s staircase, students’ photography was displayed on the walls.

In April of 1974 a collection of 85 photographs by Ansel Adams graced the SRJC art gallery walls.

Breth’s childhood began in Vienna, Austria; she moved to the U.S. to attend college. Despite studying chemistry and math as an undergraduate, Breth went on to obtain her MFA in photography and filmmaking at the Art Institute of Chicago.

Breth enjoyed the exploration AIC allowed her. “You don’t have to concentrate on one major. You can find out what you’re good at. You can take shoe design if you want to,” she said.

“I loved capturing a moment. I’m a collector. I need to collect; I don’t have a good memory. I always needed that notebook, what’s called in French, aide-memoire,” Breth said.

Breth traveled the world, camera in hand. “The photograph, for one thing, is very democratic. It freezes a point in time the way I might not have seen it. It’s the present and the past, all in this photograph,” she said.

When someone stole her camera in Mongolia, Breth made due with a cheap point-and-shoot camera. She photographed the innovative architecture of Abu Dhabi and captured the small African telecentres, colorful huts people used to make phone calls because not everyone could afford a phone. In her extensive travels, Breth exposed cultural differences through her own unique lens, whether her subject was cell phone yielding strangers on subways or patrons observing art in museums.

Breth’s Sabbatical Exhibit, showcased in the Robert F. Agrella Art Gallery in 2011, featured a series titled “Zuluzeit.” The series focused on airports with images of passengers and their luggage, advertisements posted on walls, empty lobbies and planes preparing for take off.

When not pursuing her own photography, she spends her time helping others fall in love with it.

Breth began teaching at SRJC as an adjunct faculty member alongside full-time instructor John LeBaron. It wasn’t easy following an instructor like LeBaron. Students were accustomed to his style, and even without sites like Rate My Professor, they still held expectations for how the course should be. It took Breth a couple of semesters to gain student acceptance.

She witnessed the transition from exclusively analog courses to the inclusion of digital.

She prefers analog photography and doesn’t fear for it as an artform. “Students are still fascinated with the process and all the top art schools still have film programs,” she said.

She’s also watched as students’ attention spans dwindled with the availability of their cell phones. It has become increasingly difficult to compete with the pocket-sized screens during lectures, but Breth still tries to maintain engagement.

“She’s extremely knowledgeable. She’s very good at looking at images and seeing what’s interesting about them and what’s really going on in them,” said Greg Carney, 22, a current student of Breth’s

Devyn Ballard, 17, a Pathways Charter High school student, said, “She can be tough. You might feel a little intimidated or she might push you, but it’s all worth it. She’s really good about praising you for a job well-done.”

But with no full-time photography instructor replacing Breth’s position next semester, it’s concerning for the workload of other full-time professors in the art department who are responsible for evaluating adjunct faculty.

Although the administration is currently in financial straits, Breth said, “You really owe to the student to have a full-time person who is not distracted by going to teach in three different places.”

A woman who dedicated her life to the SRJC photography program is finally taking some time for her son and herself but wishes to instill one last message to all those wishing to pursue photography.

“Like any art, photography is a practice, you have to do it a lot, even daily. Make your photographs with intention, have courage to try something new, yet be self-critical and always learn from your mistakes.”