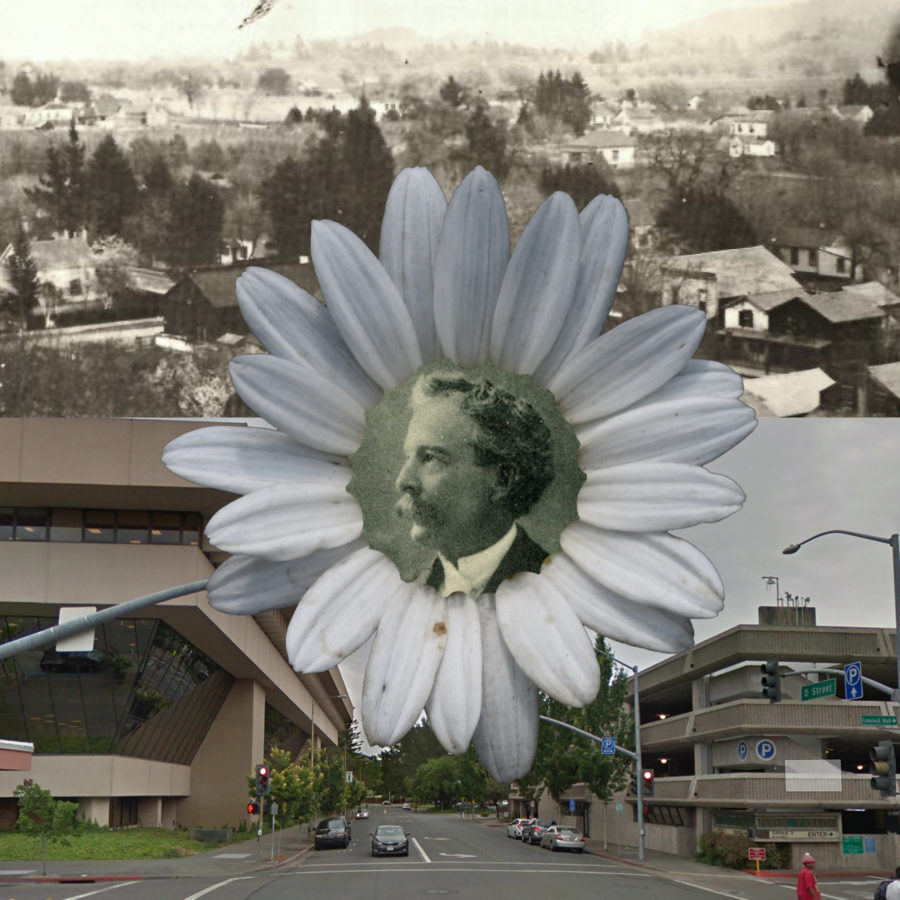 In the 1870s, Santa Rosa’s Chinatown took up a couple blocks along the creek in between where D Street and the Roxy Theater now sit.

*The Oak Leaf incorrectly listed Burbank as secretary of the Anti-Chinese Committee based on information from Gaye LeBaron’s Press Democrat articles published in 1999 and 2004. Since this article was first published on April 19, 2018, the author and editors at The Oak Leaf met with LeBaron to search her archives at Sonoma State University. We discovered that Luther Burbank was instead secretary of a library committee, not the Anti-Chinese Committee. According to the Sonoma Democrat, in 1886 Burbank was a member of the Anti-Chinese Committee and held a leadership role as a ward member charged with announcing the boycott of Chinese businesses to a portion of Santa Rosa. In Peter Dreyer’s 1993 book “A Gardener Touched with Genius, the Life of Luther Burbank,” Dreyer says on page 160 that Burbank was “not exempt from the bias of his contemporaries.” Dreyer then explains that Burbank wrote a letter in 1892 to Congressman Thomas Geary complimenting Geary’s work to extend the federal Chinese Exclusion Act of 1882. It appears Burbank does this as part of his request for Geary’s support of a plant patent law. In light of this research, the author and editors at The Oak Leaf Student Media still hold the opinion that the Burbank Auditorium should be renamed. To our knowledge, Burbank never expressed the views he held in his heart but also never denounced the racist actions he partook in during the late 1800s in Santa Rosa.

Burbank Auditorium, home to Santa Rosa Junior College’s theater arts program, is under renovation during the school’s centennial year; this is an opportunity not only for architectural enhancements but to right a historical wrong, by renaming the building altogether.

The auditorium is one of many Sonoma County buildings named after Luther Burbank. Locally and nationally, he is considered an agricultural hero. Schools across the country take his name. Frida Kahlo even painted him in 1931.

Burbank is famous for creating the Shasta Daisy, Burbank Potato, Santa Rosa Plum and hundreds of other plant varieties. He is one of the most revered plant breeders and no one is arguing to rename the auditorium because Burbank created the disgusting white blackberry.

The auditorium needs a new name because Burbank probably thought white blackberries superior for the color of their skin.

Luther Burbank was a member of Santa Rosa’s Chinese removal project. He leveraged his local influence and heroic stature to villainize an entire community on the basis of ethnic difference. His name should not be on campus.

This is an opportune moment for renaming. The large-scale renovations to Burbank include the addition of two new classrooms and the remodeling of the 400-seat main auditorium. Popping off those name placards is relatively simple in terms of construction.

Currently, placards are popping off around the country. Activists are pulling down Confederate flags, toppling monuments and painting over racist murals. Whole schools, once commemorating Confederate leaders, now have new names.

But do Burbank’s wrongs warrant the removal of his name from the auditorium? He didn’t lead a confederate army, and he didn’t enslave people. But in the context of “liberal” Sonoma County, where people point to the lack of diversity but fail to accept its history of racism, Burbank is a perfect idol to fall.

We could also start by questioning why his name fronts numerous local buildings in the first place. Burbank wasn’t a Santa Rosa native. He came to the North Bay from Massachusetts in 1875, bought massive amounts of originally Pomo or Miwok land and started a plant-breeding empire.

In a recent conversation, Santa Rosa historian Gaye LeBaron referred to Burbank as “a gardener who got lucky.”

But how did Burbank get lucky? He didn’t invent the concept of selective plant breeding. Communities around the world have selectively bred plants for nearly 10,000 years. Burbank just had the power and self-serving nature to take ownership over species and shamelessly promote them.

More pertinently, Burbank had the gall to play a lead role Santa Rosa’s Chinese removal project. It’s true that almost all whites in Sonoma County were anti-Chinese at the end of the 19th century.

“Everyone except for a few ministers and women’s groups were simply bent on getting the Chinese out of town,” LeBaron said.

But Burbank was a plants man whose experiments changed the face of agriculture. He likely knew then what most agriculturalists know now–even if they’d never admit it: employing underpaid immigrant labor is the only way our nation’s food system functions.

In the mid 1800s, thousands of Chinese immigrated to California to work in mines and lay railroads. By the 1870s there were Chinatowns in major cities along the Pacific coast.

In the 1870s, Santa Rosa’s Chinatown took up a couple blocks along the creek in between where D Street and the Roxy Theater now sit.

However, in 1880 a recession intensified, making money and jobs tight. Desperation and xenophobia led many whites to point to the Chinese as the cause of the economic turmoil.

A group of Santa Rosans formed the Anti-Chinese Committee in 1886 with the explicit goal of removing all Chinese residents from Santa Rosa.

In the California Digital Newspaper collection, The Sonoma Democrat describes Burbank as a member of the Anti-Chinese Committee. The newspaper lists him as the representative of a ward, assigned to announce a major boycott of Chinese labor in February of 1886.

The committee hung a huge banner that read, “THE CHINESE MUST GO. WE MEAN STRICTLY BUSINESS,” across Mendocino Avenue where Exchange Bank now sits.

As described in “Santa Rosa: A 19 Century Town,” the biased and bigoted local newspapers, The Santa Rosa Republican and The Sonoma Democrat, ran pieces that villainized the Chinese with horror stories and propaganda blaming them for taking the white man’s job.

By the late 1880s, exclusionary methods and direct threats uprooted much of the Chinese community. Each week papers triumphantly reported on how many Chinese residents were seen at the rail station leaving town.

“But by the fall, the headlines were, ‘Who is going to pick the hops?’ because the white people didn’t volunteer. The parallel with modern Latino labor is just huge,” LeBaron said.

Some argue renaming buildings and tearing down statues is an insignificant step in the pursuit of social justice. But the fact is, people blindly uphold Burbank as a flawless figure and there is little to no awareness of the Chinese community that played such an important role in Sonoma County.

Those who cannot remember the past are doomed to repeat it. In 2018 the President is Donald Trump, whose major campaign goal was to build a wall on the border of Mexico to stop immigrants from taking “our” jobs. Capitalizing on economic turmoil, Trump’s campaign ran off the same racism and xenophobia that Burbank employed in the 1880s, and it worked out pretty well for them both.

Why do we care about the plumcot more than the railroad system Chinese labor built? How far could Burbank’s plants have spread if there were no railroads to travel on? How many underpaid immigrants worked in fields where his plants would eventually grow?

It would be unfair to paint Burbank as unique in his bigotry or anti-Chinese sentiments. White supremacy was the rule of the day in the end of the 19th century.

“You have to be very careful looking back into history and judging based on today’s standards,” said LeBaron.

But white supremacy is by no means dead. Maybe this is because our understanding of history is filtered through the white lens. Maybe it’s because we can’t stand to see our idols fall.

We are taking steps to architecturally bring this building into the modern day. Can’t we also update the namesake to someone who stands up to our modern values? Maybe we can name it after one of the ministers that fought against the anti-Chinese movement, which is much more heroic than breeding plants.

Or we could do something unusual at SRJC and name it after someone who isn’t white and male.

On the theater arts department’s website, they describe themselves as striving to foster “a profound awareness of cultural diversity, and a deep commitment to individual education, self-worth, and training.”

Burbank stripped Sonoma County of cultural diversity. In doing so, he stunted generations from truly being educated about the history of their community. His name can live on down the street at Burbank Gardens, where hopefully the plants he created can outgrow the mistakes he made. But there is no space for his name on our campus.