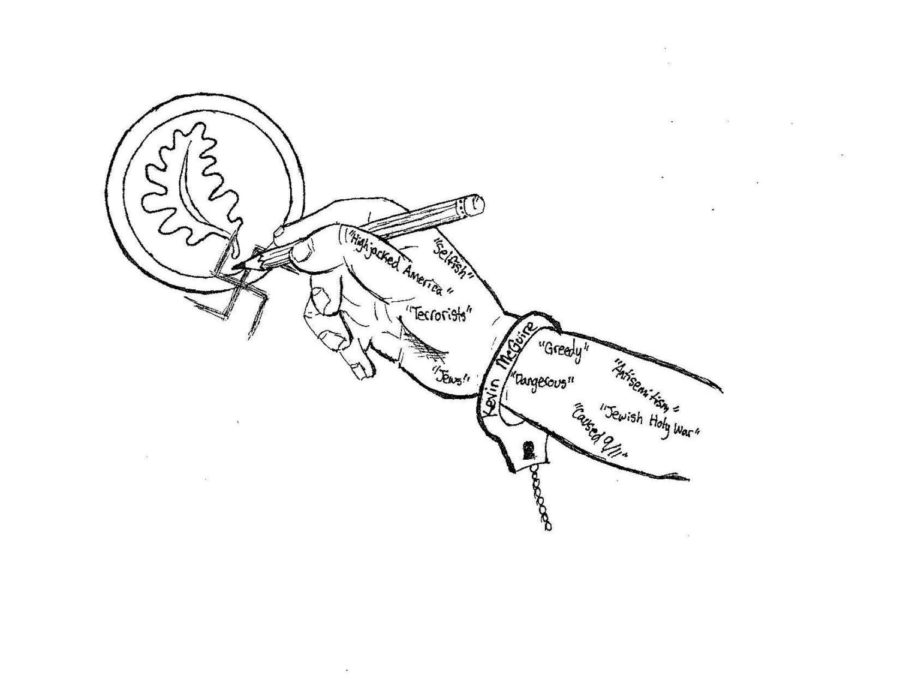 In journalism, ethical lines can blur when deciding what is suitable to publish under the guise of free speech.

In spring of 2003 an extremely controversial article ran in the Santa Rosa Junior College student newspaper, The Oak Leaf.

Kevin McGuire, an engineering student, authored a piece titled “Is Anti-Semitism ever the result of Jewish behavior?”

The article insinuated that “Jewish Israel” was the biggest terrorist organization in the world and posed the question that perhaps Anti-Semitism was the result of Jewish behavior.

McGuire wrote, “Israel is currently and has been historically involved in a genocidal war against the Arab world. The Zionist Jews believe they are the ‘chosen people’ of God and that the world was given to them and is their possession.”

McGuire’s claims were outlandish, unfounded and flat out lies. Most of his citations were from white supremacist websites, specifically NationalVanguard.org.

McGuire also claimed the “Jewish war of genocide” was being funded by the United States, right off American taxpayers’ backs.

McGuire moved to Bozeman, Mont. a few years later and ran for the Bozeman school board in 2005 on the platform of a white separatist group, The National Alliance.

He shared the group’s beliefs that public schools were ignoring white children and promoting homosexuality.

In an article written on the Anti-Defamation League’s website, author Erin Entrada Kelly wrote, “According to one of the student newspapers, the Victory Forever website originally had a page offering music by independent artists, including at least one African-American artist. However, between the time when the ads were purchased and when they ran, the site was apparently changed to its present, explicitly white supremacist form.”

In August 2009 McGuire faced a trespassing charge in Kootenai County District Court after he was arrested outside Jimmy C’s bar in Athol, Ida. Bar patrons said he’d been making racist comments, but McGuire told Kootenai County sheriff’s deputies they only wanted him to leave “because I’m white,” according to court documents.

Kristinae Toomians, then 19, was the editor-in-chief who approved publishing the article in 2003. She explained how she and the faculty adviser at the time, Rich Mellott, were stretched thin during the incident, saying “There wasn’t really anyone working at the paper.”

Toomians said towards the end of the semester, there was hardly anyone to help write stories, take photos or work on layout.

“There was a separate journalism writing class that was supposed to feed the paper content, but they didn’t provide much,” Toomians said. “There’s really no good excuse. I was naive and stupid.”

Toomians said Mellott had a hot temper and was difficult to work with; ultimately their relationship ended poorly. She said she was burnt out and the article slipped through the cracks.

Toomians was editor-in-chief as a freshman. “I remember thinking it was a pro-Palestinian piece,” Toomians said. “I essentially put that newspaper together all by myself.”

“I’m 34 now. I was 19 then, with very limited life experience. I knew the letter to the editor would get some backlash, but I didn’t expect the amount of press, vitriol, vandalism, threats, etc.,” she said. “With 15 years of hindsight, I would have never published the letter as submitted.”

Some faculty, including those at the paper, thought the content itself was outrageous, but believed the article was protected under free press and supported The Oak Leaf’s right to publish.

Ed LaFrance, retired communication studies instructor, said, “During the second semester, everyone is fried, stressed out and already burnt on school.” It was a time when tensions were already high on campus, so it was perfect conditions for escalation after the piece ran.

“Could be a student walkout about the Florida shooting. Could be a fight over pay. Could be a battle over parking—All hell breaks loose.” LaFrance said. “As I recall, it happened during second semester. So the ‘essay’ caused flaming emails to individuals and on the distribution list.”

The Academic Senate wanted to punish those responsible for the Oak Leaf’s production by imposing censorship on the paper and a pre-publication review process of all content.

“That’s where I came in. I was not department chair, but I was probably the ‘lead’ full-time faculty member in the area of media,” LaFrance said. “I believe, to my death, in freedom of the press and freedom of speech.”

Toomians described her response to all the anger, outrage and debate that erupted on campus from the opinion piece.

“After it ran, I fought to prevent the administration from applying a pre-publication review process and censorship,” Toomians said. “We published two pages of angry letters in response to the article. One of our staff writers wrote a piece in opposition, and I clarified that the original opinion piece was not from a staff writer and did not reflect the opinions of the paper, staff or the editor.”

In hindsight, Toomians recognizes that running the piece was a bad decision, regardless of whether it was protected speech.

Toomians ended on notes of regret and sadness at the legacy she left in the wake of McGuire’s opinion piece.

“I learned a great deal from the experience, but of course I have many, many regrets,” Toomians said. “I worked very hard, but unfortunately, will only be remembered for publishing McGuire’s piece. It was a very dark, difficult period in my younger years that I’d rather not relive.”

Though the incident marred both the Oak Leaf and SRJC, some positive came out of it.

Anne Belden, current Oak Leaf faculty advisor, has used McGuire’s piece as an exercise in her introduction to journalism courses for the past 14 years to teach students about journalism ethics. And two Oak Leaf editors were given free trips to Israel for student journalists because the sponsoring organization, which mostly recruited from Ivy League schools, thought the Oak Leaf to be an antisemitic publication and wanted to educate its editors.