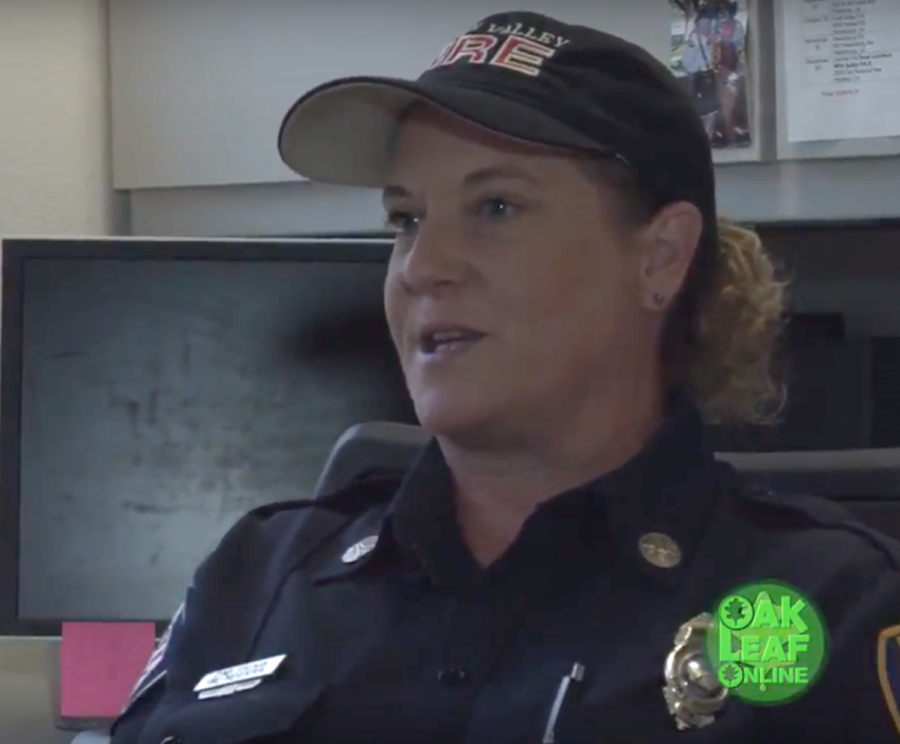 Fire Prevention Officer Cyndi Foreman woke early Monday morning in her Windsor home to radio calls of structure fires on Mark West Springs Road, and a Sheriff’s Deputy trapped by a wall of flames. Upon hearing the call, Foreman knew it was time for her to go to work.

“I did not at that time realize the magnitude of what was happening. I will be forever changed by what I saw,” Foreman said.

As she got dressed and walked out to the service vehicle parked outside, neighbors near and far walked over and started asking her questions. They wanted to know what to do.

“In the back of my mind, I’m thinking, ‘No, we don’t need to evacuate.’ But I certainly wasn’t going to tell the public that,” Foreman said.

As her neighbors left to their homes she turned to her husband and said, “We’re not evacuating. Get the dogs loaded up. I’ll call you and let you know.”

Foreman got in her truck and drove from her house to Larkfield. Even before she saw the glow of the flames, she could hear the muffled booms of propane tanks exploding in the Mark West Springs neighborhoods.

“Every time I heard one of those, I knew it was another house we had lost,” Foreman said.

Foreman knew this fire was different from any other she had seen before.

“Usually we call the site of a fire ‘controlled chaos.’ But this was straight chaos. The sheer magnitude of this fire was absolutely shocking,” she said.

To help get the word out, Foreman drove through neighborhoods sounding her siren and banging on doors, trying to save as many lives as possible by telling people to evacuate.

As she made her way into the Wikiup hills, Foreman twice had to turn around to keep herself safe. “The closer I got to the top, the more dangerous it became. The last thing we need is a firefighter stuck or injured,” she said.

Foreman knew it was counterintuitive to put herself in unnecessary peril to save others.

“Then we’re gonna be drawing resources for that and not getting help to the folks who really need it,” she said.

At one point, she and several other firefighters were standing in the Pacific Heights neighborhood, at the base of Mark West Springs Road. They began to hear loud popping sounds, which they realized was ammunition going up in flames. The source was Markell’s gun shop, where Foreman’s department bought their flashlights and tactical gear.

“It just starts to make it very real. When you start to attach horrific sounds like that to people you know, it’s a game changer,” Foreman said.

Foreman was baffled at the sheer scope of this fire, and the speed with which it consumed land and buildings both in the hills and on the valley floor.

“The fuel that this fire had, the path that it took; there was no fire modeling to predict what this thing did. When it blows across six lanes of freeway, when it takes out entire neighborhoods miles away from the firefront…there’s no way to make that make sense,” Foreman said.