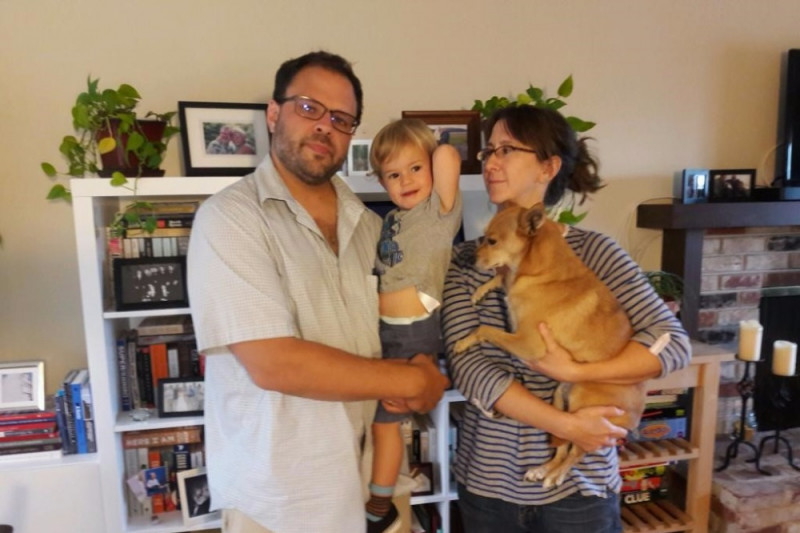 Ethan De Seife and his family

When Ethan De Seife moved his family from Burlington, Vermont to Santa Rosa in July of last year, he didn’t know anyone. All he knew was that he had a job opportunity teaching Media 4, an introduction to mass communications class at Santa Rosa Junior College.

“I didn’t know anything about the community and the people here. It was just a place for me to get a job in my field,” De Seife said.

De Seife also had no way of knowing that one of the most destructive wildfires in California’s history would ravage the city of Santa Rosa, burn his home to the ground and leave him, his wife and their 2-year-old son homeless. “We were only living in our home for less than a year before the fire,” De Seife said.

De Seife joins at least 18 other SRJC faculty or staff members confirmed to have lost  homes in the fire. Most had to flee in the middle of the night with little or no notice.

The night the fires broke out on Oct. 9, De Seife hosted visiting in-laws, “We all woke up around 1 a.m. and knew we had to evacuate,” he said. The Tubbs wildfire destroyed De Seife’s home in the Hidden Valley neighborhood. “I was standing calf-deep in ash in my former house.”

The De Seife family spent the next morning at the Santa Rosa Veterans Memorial Building, unsure of what their future held as the city burned all around them. De Seife’s entire world was in flux.

Meanwhile, on the opposite coast of the country in Jacksonville, Florida, De Seife family friend Jennifer Campbell, 29, got to work on a gofundme campaign, unbeknownst to the De Seife family.

“They are very helpful people. He’s a professor, she works in healthcare and they just connect people,” Campbell said. When Campbell began the process of creating the gofundme page, there were already more than 4,000 campaigns tied to the wildfires, “I didn’t think we’d get $25,000 in three days. People Ethan hasn’t talked to in 30 years are donating.”

The initial campaign goal of $25,000 was raised in just three days, with contributions from more than 250 people. That level of support is augmented by the presence of the junior college population.

“Students and faculty are contributing to the gofundme page,” De Seife said. “Some students are even offering to babysit for me. It’s incredible, I’m just an adjunct instructor who’s only been here for a semester,” De Seife said.

Growing up in South Florida, Campbell is no stranger to natural disasters, “I lived through Hurricane Andrew, but hurricanes don’t completely wipe everything away like a wildfire,” she said.

As the wildfires continue to remain active, the smoke has yet to clear, leaving the De Seife family in a whirlwind of uncertainty. “I have no idea how I’m going to make the transition back to school. It’s not going to be easy,” he said.

The thin housing market in the North Bay Area will put the SRJC faculty to the test. A recent Bloomberg article featuring De Seife, included a graph displaying the U.S. metro areas with the highest rent increase during the last five years; Santa Rosa was at the top of the list.

“Sonoma County has had such a housing shortage for long time. The wildfires are going to make it even harder. It’s going to be especially challenging for adjunct faculty,” said Mike Traina, an SRJC media professor.

With so many unanswered questions swirling among the ash ridden air, there’s one thing that De Seife does know. “It’s incredible to me the type of support I’ve received from a community I just recently joined,” he said.

Donation to the De Seife Family’s gofundme page are here: