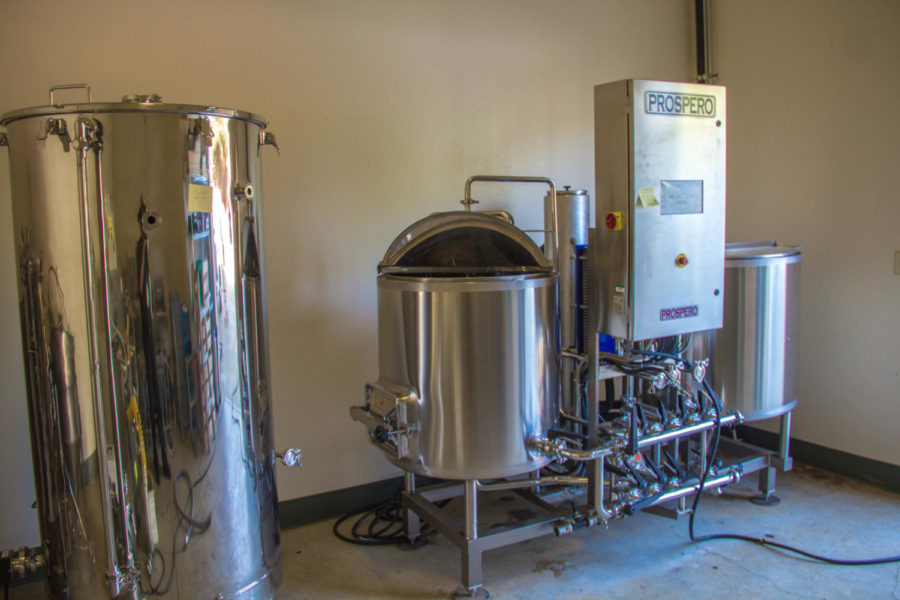 Brewing beer sounds like a dream job. There’s so much room for creativity, like experimenting with flavors and ingredients, tweaking the fermentation process, tasting your creations and perfecting the formula.

At Shone Farm, Santa Rosa Junior College students learn this magical process step by step, hop by hop in the hopes of starting a career in the millennia-old art of brewing.

In 2017, the website pudding.cool ranked Santa Rosa as the microbrew capital of the country, beating out heavyweights like Denver, Minneapolis and St. Louis.

SRJC responded to this explosion of brew culture by creating a two-semester certificate program that prepares students to enter the industry or even launch their own microbrewery.

The 16-unit certificate program covers everything a potential brewer needs to know. Students learn fermentation, the process by which yeast turns malted barley into alcohol, a pillar of beer making, and how to manipulate temperature to affect carbonation of varieties like lagers, stouts, pilsners and ales.

In the initial lab phase of the class, students brew 5-to-10-gallon batches, using hands-on experience to learn these principles. In the second semester a small commercial brewing system is used to produce around 62 gallons of ale.

Students use the system to familiarize themselves with the different valves and pumps on a commercial brewing still.

Responding quickly to local industry’s needs is an important function of community colleges. The brewing program is one example of how SRJC tailors its curriculum to community needs.

Katie Barmazel, one of two women in the new program, has always enjoyed home brewing and said the local craft brewing explosion inspired her to pursue a formal education.

Barmazel is exactly the kind of student SRJC hopes the new program will attract; somebody who has a passion for brewing and wants to turn that hobby into a career.

“The expansion of the local industry did have an influence on me. It allowed me to come into the program as someone who was just exploring the world of craft brewing, as someone who just liked the flavors and styles and home brewing myself,” Barmazel said. “It’s a little easier if you have prior knowledge even in just home brewing.”

Fall 2017 marked the maiden semester for the brewing program, attracting students of all backgrounds and aspirations. As with any new program there is a learning curve, but the potential for growth is clear.

“Mostly it’s been working out the kinks as far as what we’re focusing on and what we need to know when working on a commercial system,” Barmazel said.

Typically, would-be brewing students have been directed towards UC Davis, which has renowned brewing and viticulture programs 50 years in the making. The program has produced local legends like Brian Hunt of Santa Rosa’s Moonlight Brewing Co. and Jesus Ceja of Sonoma’s Carneros Brewing Co.

But SRJC provides a cheaper alternative.

Traditionally, brewers break into the industry by knowing someone in it, reading books about it and then learning on the job.

Bryan Donaldson, who studied at UC Davis and is SRJC’s brewing instructor and lecturer, said he’s trying to “provide a background for employers to build upon.”

He gives students the tools they need to use different techniques, ingredients and equipment to obtain the best final product possible. An educated workforce is key if demand for local breweries is to remain high or increase.

“To produce a high-quality product, you need high-quality workers with a broad knowledge base,” said Donaldson, who also works as Lagunitas’s brewing innovation manager. “Brewing is a lot of work for not a lot of money. It’s not always creating. Cleaning and sanitation are important.”

Shone Farm Pavilion Director Chris Wills developed the course outlines, but Donaldson will take over as brewing program director. One of Donaldson’s goals as brewing instructor and eventual program director is to get the program accredited by two national brewing associations—the Master Brewers Association of America and the American Society of Brewing Chemists. These bodies monitor and evaluate programs across the country and suggest the best practices for beer-making.

“In brewing there’s a lot of right ways to do things and a lot of wrong ways to do things,” Donaldson said. His instructor at UC Davis wrote him a letter of recommendation and he plans to return the favor to his students. “Any student who proves they know the material, I’m gonna go to bat for them.”

Deal teaches the lab and Donaldson is the lecturer. The duality of Donaldson and Deal’s teaching styles gives students multiple perspectives on each topic in an industry that thrives on creativity, innovation and a willingness to experiment. Students visit local breweries and have brewing community speakers come in, providing different perspectives.

Engaging with the local brewing community is essential to the program’s success. The owners of the Russian River, Moonlight, Bear Republic and Woodfour brewing companies advise the brewing program’s leaders on what they want out of a certificate graduate. Ideally, graduates can get a job at one of these or other local breweries.

“Locally, there’s so many breweries. It’s really important for beer, especially, if you are trying to groom people for the local industry, that the local industry is giving their input. Especially in these early stages of the program,” Deal said. “It could go in a lot of different directions. We’re really focusing in on what works every semester as it grows.”

Ultimately, students don’t mind being the program’s guinea pigs. “The most fun thing is actually being surrounded by people who are interested in the same thing, working together and making the best product possible,” Barmazel said. “Some of us are talking about teaming up down the line.”

Wills is interested in producing a beer for the general public but needs to work on licensing and getting the proper approvals. Students produce wine for sale at Shone Farm, and Wills thinks they could do the same with beer.

Last semester professional brew judges visited the students and critiqued their recipes. The winner got to brew their beer at Barrel Brothers Brewery, where Lab Instructor Deal is co-founder. This semester the winner of the in-house brewing contest will get 10 barrels of their creation produced at Barrel Brothers and the formula will be sold.

“I think this is a great opportunity for the students and a great way to get the word out about our new program,” Wills said.

Whatever recipe the students develop—whether it’s a triple IPA or a light summer ale—it’s sure to be a promising start in their brewing careers.