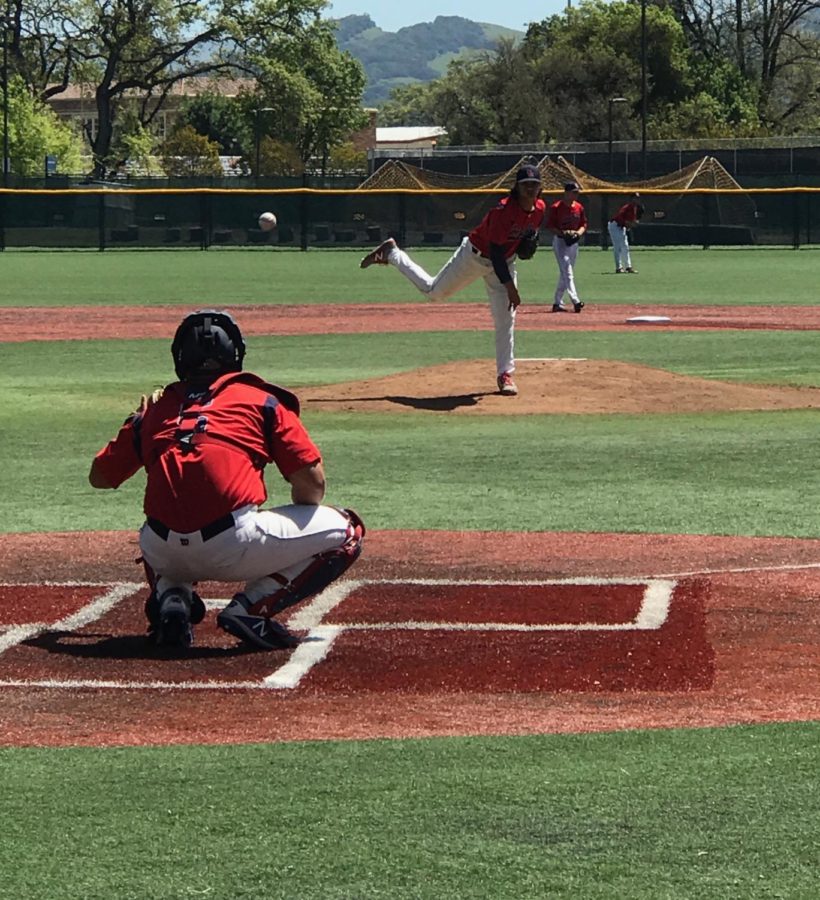 Patrick Keamoi warming up with catcher Cole Brodnansky before his second career start.

Second-year pitcher Patrick Keamoi made his second career start for the Bear Cubs. He pitched strong enough for the team to win, but was let down by the Bear Cubs’ offense. Keamoi pitched 7.2 innings and limited the Panthers offense to just four hits and zero runs. He also added two more strikeouts in the game to pad his season total of 16.

“Patrick pitched a heck of a game. He gave up four hits and we couldn’t score any runs for him,” said assistant coach Tom Francois.

First-year pitcher Carson Snyder relieved him on the mound at the top of the seventh inning with only one out left. He had a rough time following up to Keamoi’s excellent outing. He only faced two batters but made some critical mistakes before being quickly replaced.

Snyder committed a fielding error resulting in a Sac City player reaching first base safely. The next pitch he threw went behind catcher Cole Brodnansky and the runner advanced to second. He walked the next batter with four balls, putting two players on base. After two batters, Synder’s outing was done.

“Well, what can I say? We don’t make that error, we win that ball game,” Francois said.

Second-year pitcher Trenton Darley came out of the bullpen to take over for Snyder. Darley made the same mistakes as Snyder by walking the first batter he faced to load the bases.

The Bear Cubs were grasping onto their 1-0 lead. All the team needed was one out to end the inning.

Darley had Jake Guethe, right fielder for Sac City, in a 3-2 count before he cracked a low-hanging breaking ball to the gap between left and center field. His stand-up double cleared the bases and put Sac City to a 3-1 lead over the Bear Cubs.

“Top of the seventh, all he has to do is get an out. You gotta close the door, man,” Francois said.

SRJC fought back but were not triumphant in their efforts.

Only one player, shortstop Hance Smith, recorded a hit after trailing 3-1. Smith, now batting second in the lineup behind right fielder Blake Berry, had the most productive day for the Cubs’ offense. Smith went 2-3 and drove in the only Bear Cubs run.

“At this point of the season, it’s going to be the team that makes the least amount of mistakes that’s going to win. You saw what our mistake cost us today,” Francois said.