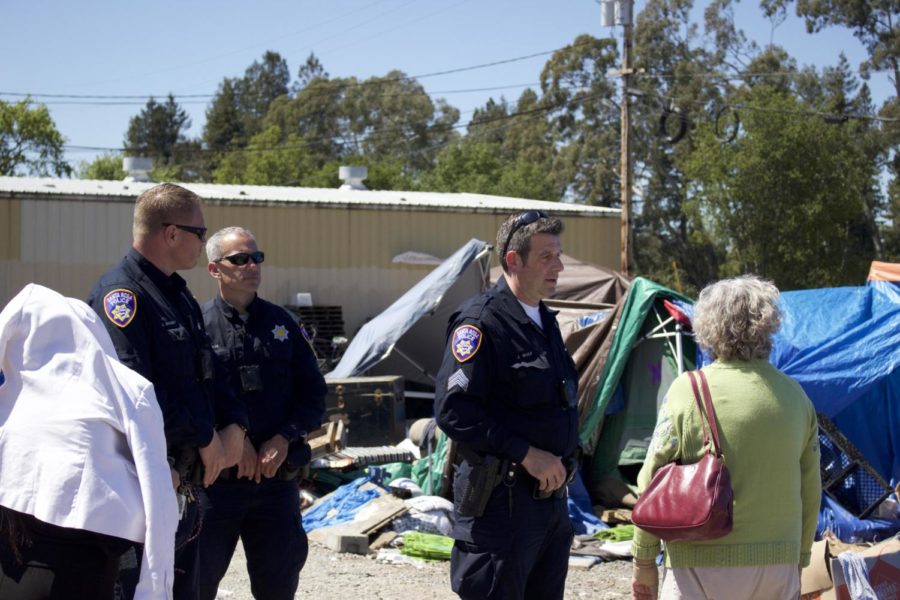 Santa Rosa police oversee the final stages of shutting down the 'Camp Macaela" homeless encampment behind the Dollar Tree in Roseland. Sonoma County officials need the area cleared to begin development of an affordable housing project.

A homeless encampment known as Camp Macaela, located behind the Dollar Tree in Roseland, was officially shut down early Thursday morning.

The camp was erected in Nov. 2015 under the approval of the county’s Community Development Commission (CDC), which owns the site where Camp Macaela was located. The camp’s closing had been planned for some time.

Two weeks ago homeless advocates got the approval of a federal judge in San Francisco to block the most recent removal attempt in order to give the residents time to find other accommodations. The grace period ended on April 19. The CDC plans to build an affordable housing development on the property.

CDC official Alegria De La Cruz said, “The Community Development Commision, among other things, is the agency that coordinates the homeless service up here. This property is slated to be developed into affordable housing, and we can’t [begin] while the encampment is here.”

“The CDC has multiple concerns. It’s the condition of the folks living here and the ability for us to be able to develop the property for affordable housing. The health and safety of the people living here in the camp is also of deep concern.”

De La Cruz said the only way they can legally remove people from the location is if there is appropriate alternative housing for them. She said there are housing option available to the camp’s residents.

Jennielynn Holmes is the senior director of shelter and housing programs at the nonprofit Catholic Charities of Santa Rosa. The group was contracted to run the navigation center that was located next to the encampment.

“We were there providing assessments, triage service, helping coordinate medical support for individuals benefits enrollment,” Holmes said. “The navigation center closed on April 3, then we became entirely camp based, so we’ve been in the camps everyday. Today we were here continuing those assessments, transporting people to an intervention, finding shelter placement  and housing placement.”

Holmes said as of noon on Thursday they had moved 51 people into temporary housing and six people into permanent housing at the Palms Inn in Santa Rosa. At its peak, Camp Macaela was home to approximately 150 people.

“This morning it was just 11 people alone and now we’re in the final stages of moving the people who are still here. If we can’t find an intervention in our existing shelters then we will implement hotel vouchers.”

Santa Rosa Police were on the scene talking to residents and overseeing the shutdown of the encampment.

Sgt. Jonathan Wolf said, “CDC is responsible for this property, they’re the ones doing the cleaning and moving. We have made no arrests, we’ve issued no citations; we are here more or less just in case, because it’s obviously an emotionally charged environment.”

Wolf said the situation was complex. The CDC started planning this months ago, and there was a navigation center to assist residents at the camp for 30 days. Attorneys filed for a temporary restraining order against the eviction of the camp’s inhabitants, which was granted until the judge could hear the case.

“After the judge heard the case he lifted the restraining order. Now we find ourselves here,” Wolf said.

King, a 55-year-old resident of Camp Macaela explained that up until last November he was working and had a place to live.

“This was a first for me, being homeless. I was working, but I was let go for medical reasons. I’m going through the disability process. I’m just trying to find a place—I have a lot of seizures, I have a lot of medical issues that have been going on for three years.”

King was working for a local brewery until his medical issues cost him his job.

“I wound up here because my friends all have families that were displaced by the fires, which is where I was going to go and stay for free,” he said. “It’s my first rodeo here. Since November I’ve been staying in people’s yards and lean-tos and now I’ve been here about four months.”

King is nervous about having to move again, and who he’ll be living with.

“I’m trying to get a hotel voucher, just for some peace of mind even if it’s for a couple days and then to a shelter,” King said. “As far as any conflicts, I’m not like the normal people you see out here. I’ve never had even so much as a parking ticket. I’ve never been arrested—I’m new to all this.”

Others had more coarse words on the camp shutdown. A woman who asked to go by her alias Little Lisa said, “Their solution to the homeless state of emergency is to run us out of town—They want us eradicated because we’re vermin to them.”

Lisa bears the weight of the situation and is angry—not knowing where she’ll go from here.

“It’s just back out on the f*cking streets, back into the holes you know? Underground again.”