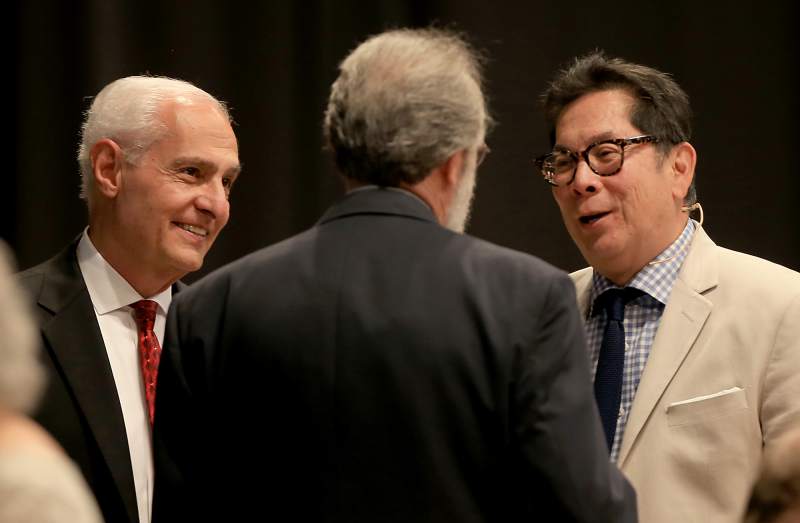 courtesy of The Press Democrat

Santa Rosa Junior College named an art gallery after the school’s fourth president, Dr. Robert F. Agrella when he retired in 2012. However, in the spring of 1996 the only art former-SRJC President Agrella brought to the school was the art of deception.

In an attempt to keep his name clean, Agrella somehow convinced the board of trustees to fork over $36,000 of the school’s budget to pay for a secret investigation into the author of anonymous letters, calling the former SRJC president a “racist” and questioning his leadership abilities.

Instead of appropriating funds to improve parking or maintain campus dorms, the school agreed to finance Agrella’s personal witch hunt into the hate-mail’s authorship , carried out by a private investigator and the campus chief of police. The pair entered offices of at least 10 instructors after hours, lifting samples of handwriting for analysis.

The investigation resulted in the firing of faculty member Sylvia Wasson, who then sued the school in return. The board of trustees issued apologies and  offered to reinstate Wasson, but she rejected their overtures and proceeded to hire a legal team.

The fiasco shook the SRJC community and was significant enough to warrant a New York Times article documenting the debacle.

The recent controversy swirling around current SRJC President Dr. Frank Chong’s rash decision to cut summer courses in an attempt to curtail a $6.5 million deficit is no doubt disappointing, but it’s far less disturbing than the reprehensible deeds of his predecessor.

Chong’s actions were unfortunate, and he deserves to be put in the hot seat for it. Despite his misstep in leadership, Chong remains an admirable leader. He hasn’t shied away from the controversy; rather he’s faced the scrutiny head on.

He issued a statement apologizing for the lapse in judgement, attended public forums lambasting his decision making, endured two votes of no-confidence in his presidency and accepted a 5 percent salary pay cut.

By owning up to his mistake and taking full responsibility for the college administration’s actions, President Chong exemplifies what it means to be a leader in a time when the leader of our own country seems predisposed to an opposite disposition on the role.

When Chong was on the receiving end of constant vitriol, he refused to throw his administrative colleagues under the bus. Colleagues who are just as complicit as Chong–if not more so–in the decision-making process concerning SRJC’s recent budget crisis.

As Chong continually makes himself available and responsive, his colleagues remain aloof and distant.

The recent summer course snafu is an opportunity we should allow our president to learn and grow from. The SRJC community must move past the vilification of Chong and move forward together in finding amicable resolutions to the school’s issues. We owe it to Chong and to the entire SRJC community to give our president another chance.

For the growing contingent calling for Chong’s resignation, be careful what you wish for. Chong could be far worse. He could be Agrella or Trump.