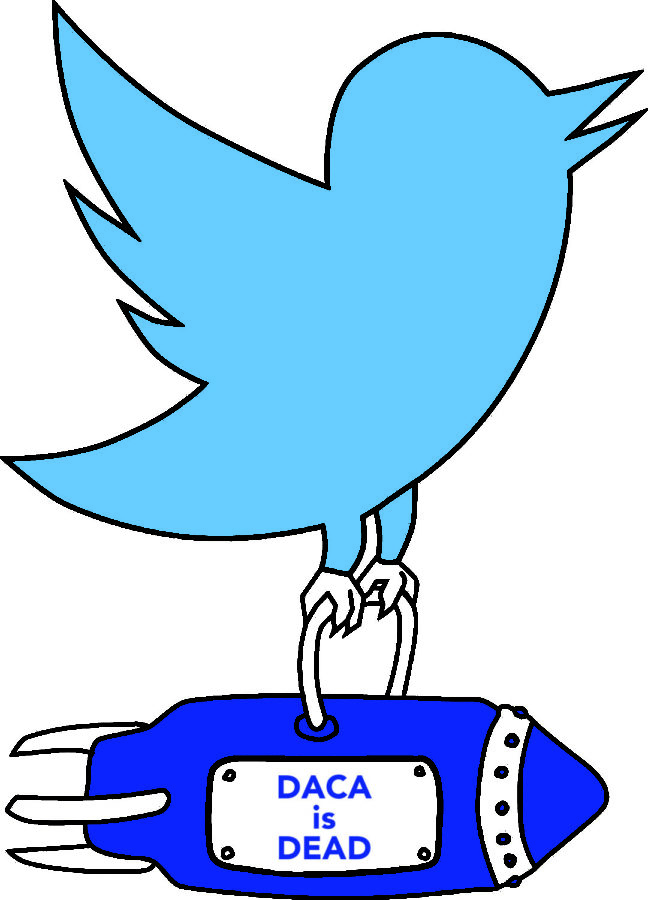 I was eating breakfast on April 2 when I saw on my phone that President Donald Trump tweeted “DACA is dead.” Anger and fear grabbed ahold of me. I felt lost and hopeless.

That day has haunted me since. Every day I go out to the streets in fear of being stopped by Immigration and Customs Enforcment. When a white van drives by, my first instinct is to look inside for ICE agents. I stare at people in uniforms and check their badges to make sure they are not ICE. I now look through the peephole before opening the door.

The stress of worrying about something happening to me and my family and not knowing when it will, makes me feel uneasy all the time.

I feel like I’m living life on a Ferris wheel. One day, I’m on top of the world and the next I fear being sent back to the place I was born. A place I know nothing about.

DACA (Deferred Action for Childhood Arrivals) has given me the opportunity to pursue an education and the motivation to strive for more. It erased years of fears of deportation.

I came to the United States when I was 8. I arrived with nothing, to a place I knew nothing about and a language I didn’t know. My first day of school was in the second semester of third grade. The principal welcomed me, gave me a tour and made me feel safe.

I attended school, learned English and successfully graduated from high school as student body president. After three years of community college, I’m on track to earn an associate’s degree in journalism.

Ever since Trump was elected president, I’ve feared I won’t be able to fulfill my dream of becoming a journalist.

More than 800,000 DACA recipients live in fear of what will happen after their protection from deportation expires. Santa Rosa Junior College serves around 1,500 DACA students whose lives are now in jeopardy, despite SRJC adopting a “sanctuary campus” status.

Since the beginning of his campaign, Trump has threatened to repeal DACA. When Trump entered the presidency in 2017, he granted Congress an extension to act on a DACA deal before March 5, 2018.

Nothing happened. Congress did not act or even make a proposal. Nada.

“Democrats don’t really want it, they just want to talk and take desperately needed money away from our military,”  Trump tweeted on April 2.

Without DACA or a permanent fix such as the DREAM Act, thousands of lives remain in limbo. Recipients don’t come here by themselves, they are brought as children by their parents seeking better education and financial security. They come seeking the American dream.

Many DACA recipients come from backgrounds where their parents struggle to put food on the table. They come from countries where the government is corrupt and people are killed by drug cartels at an alarming rate.

Deporting thousands of Dreamers is a waste of time. The U.S. benefits from Dreamers, who are doctors, lawyers, educators, journalists and community leaders; people who can and will change the world. Deporting them will hurt the U.S. immensely.

“A potential $60 billion loss in tax revenue to the federal government and $280 billion hit to economic growth over 10 years,” said Ike Brannon, a visiting fellow at the Cato Institute, a conservative research group.

We need to give Dreamers a path to citizenship to complete their goals. We are not criminals. We are required to go through background checks before we are even accepted for DACA. We can do the same for amnesty.

DACA-eligible, undocumented immigrants brought here as children, trusted the government with their personal information in exchange for work permits and a reprieve from deportation. They think of themselves as Americans and want to believe the protection DACA provided won’t suddenly be yanked away.

I have lived in this country for the past 13 years. I’ve adopted the culture, the environment and identify with the Americans around me. I have grown to be someone who cares about America because of all the opportunities it has given me, such as education, a better home and opportunities to make a good life for myself.

During my stay here in the U.S. I have also given back to my community. I’ve volunteered as a youth coach for three years, assisted in the shelters during the North Bay fires and worked with kids in an after school program.

DACA recipients are culturally and educationally American. They pay their own way, contribute to the economy and contrary to popular belief, don’t live off “government handouts.”

DACA has promoted educational and employment outcomes. It has been a major driver of economic growth.

The end of DACA is the end of hope. It’s the end of Dreamers and the beginning of a nightmare for an estimated 800,000 people.

If DACA vanishes, my dreams of becoming a journalist will probably vanish with it. I want to live a better life, improve my community and have a chance to make my dreams a reality. If I am sent back to the place I was born, none of this will be possible and what I’ve accomplished thus far will be for nothing. Now multiply that by 800,000.