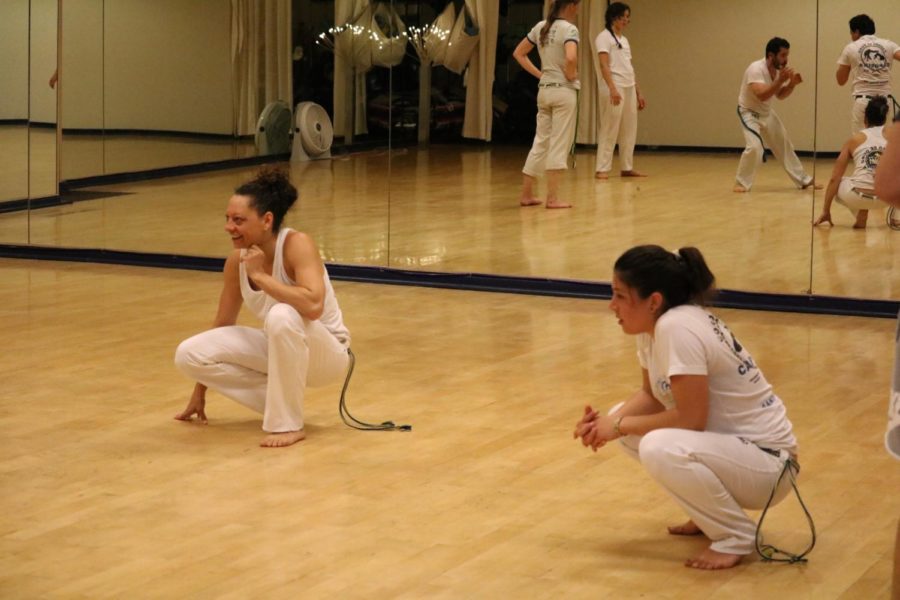 Capoeira is a story of celebration and the ability to express oneself. These abilities can be found in Santa Rosa Junior College’s newest martial arts club.

For 20-year-old kinesiology major Curumin Winter-Hare, Capoeira is not just a dance or a defense; it’s her gift. This year, Winter-Hare started a Capoeira group at Santa Rosa Junior College to share her gift with fellow students and create a space to do what she loves.

Winter-Hare’s love for Capoeira began when she was just 6 years old. Her “mestre,” or teacher, came to her elementary school and gave demonstrations to the classroom.

“I just instantly fell in love with it,” Winter-Hare said. “All of my friends dropped out and I stayed with it.”

After high school, she took a year and half off from school to travel to Brazil and learn more about Capoeira. During her month-long trip she got in-touch with the culture and learned to train as hard as she could.

Capoeira is an Afro-Brazilian martial art, developed in Brazil by enslaved Africans nearly 500 years ago. These slaves would often escape and take refuge in runaway camps, called quilombos, deep in the Amazon jungle.

When Winter-Hare returned, she relocated to Santa Rosa from Humboldt and enrolled at SRJC. Her mestre advised her to begin her own club on campus.

During this year’s club fair, she set out to inspire students with the art of Capoeira.

“I was able to get at least 25 to 30 signatures to sign up,” she said. “Once the class started we had a solid five members come that are dedicated.”

Gaby Vargas, a 42-year-old student at Tone body fitness said, “Taekwondo is just about getting points to the head and body. There is a lot more discipline in other martial arts. You get to express yourself more in Capoeira.”

A typical class consists of warming up with kicking and escape drills. Then they move on to partner drills and acrobat movements up and down the room. After about an hour of training they move onto a cool down with stretching and music.

Vargas has already received a third degree for his black belt.

“I still have to protect myself because the kicks are  coming, but it is a lot slower. It’s truly a conversation between two people.”

In Capoeira there are five different rankings. Each student starts out as a Aluno. They have a belt around their waist with either a green, green and yellow, yellow, yellow and blue. Then they graduate to a Graduado. This is where they can begin giving lessons to new kids about Capoeira. Usually having a blue belt.

After finishing your second student form, you become a Formado. A Formado can assist the head instructor. They have a green belt. The second to last form is a Professor. This is where they start teaching their own classes.

Winter-Hare takes what she’s learned and applies it to her club.

“I’ve been training so long that I can teach beginner classes well. What we do at Tone is more advanced. I simplify it,” she said.

Professora Sarará, the Capoeira instructor at Tone, has studied Capoeira since she was 19. Sarará said her brother brought her to a class once and she has been in love since.

For 21-year-old SRJC student Jacob Beal, Capoeira is something that always interested him.

“I was also at the club fair trying to get some signatures and I saw her booth across the way and wanted to sign up,” he said. “Curumin is very good at being a peer and an instructor. It’s just a very fun thing to do.”

Winter-Hare hopes to continue her club and spread Capieroa all over Sonoma County. She plans to transfer to a four-year university soon to pursue a kinesiology degree.

Classes are held at 6:30 p.m. Tuesdays and Thursdays at Tone-Pilates, Dance and Yoga on Ross Street in Santa Rosa.