Chong will stay, agrees to pay cut and ongoing review 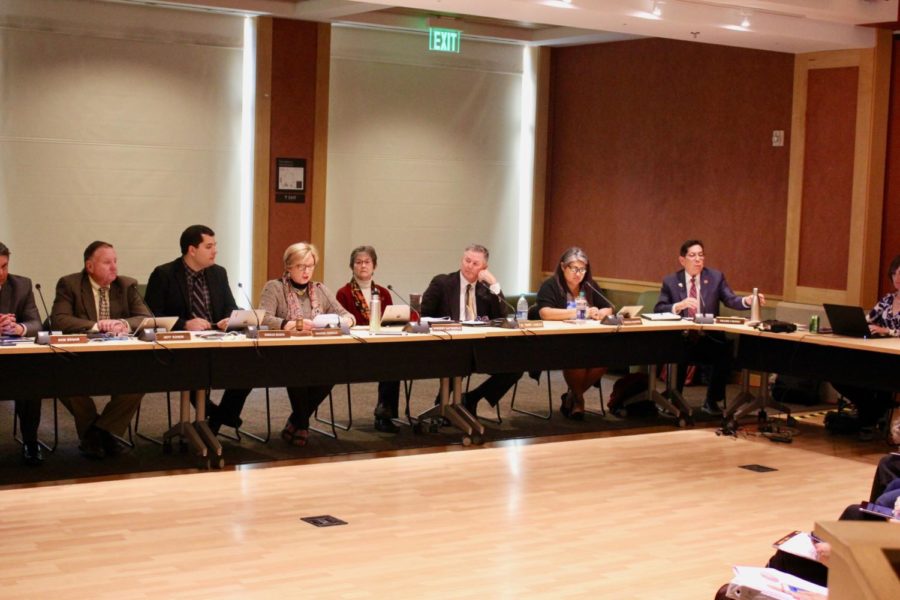 The Board of Trustees announces their decision after hearing votes of no-confidence in President Dr. Chong from both the Academic Senate and the Student Government Association. Photo by Adeira Sherpa.

The board of trustees praised, chastised and ultimately stood behind the embattled Santa Rosa Junior College president after a tumultuous 10 days and no-confidence votes by students and faculty. Dr. Frank Chong accepted a 5-percent pay cut as part of the board’s actions yesterday.

“Shared governance is an important pillar of the community college system. President Chong’s decision to reduce summer school was a lapse from this key collaborative concept,” Fishman said.

“He immediately accepted his mistake and has publicly addressed it,” Fishman said. “In addition he has spent the last week listening to and internalizing criticism at multiple campus meetings.”

According to Fishman, the lapse in communication included the board as well and board members attended the same meetings Chong did.

“We accept President Chong’s apology and we stand behind him,” Fishman said.

Fishman also announced the formation of a board ad hoc committee to weigh progress on the budget and shared governance for the next year.

Apologizing to the packed crowd at the Lawrence A. Bertolini Student Center, Chong acknowledged his role in the summer course cancellation scandal and outlined his plan moving forward.

The apology comes after SRJC administration’s sudden March 29 announcement of massive cuts to Summer 2018 courses, spurring a swift campus-wide backlash and resulting in a reversal from Chong and his staff.

Both the Academic Senate and the Student Government Assembly (SGA) presented their bodies’ votes-of-no-confidence in Chong to the board.

In response to the no-confidence votes, Chong said, “It’s a wake-up call for me and my staff.”

On top of his own pay cut, Chong proposed that his top administrators take a voluntary 3-percent cut and forgo their 1.56 percent pay raises that took effect this January.

With Vice Presidents Doug Roberts and Mary Kay Rudolph both retiring this summer, Chong announced that he will be transferring some of their duties to other SRJC employees, citing a need to smooth out the upcoming administration change.

Chong replaced Roberts with Kate Jolley, the senior director of fiscal services, to oversee the budget.

Chong also announced that Jolley would present the proposed 2018-2019 budget to students and classified staff.

Jolley appeared before the board of trustees to make the first public presentation of the projected 2018-2019 budget.

Her budget predicts a $6.5 million deficit in the coming year.

The advisory President’s Consultation Council (PCC), which includes student, faculty and staff leaders, will hold discussions about the budget and post updates online.

Chong promised that he and the council will review the school’s shared-governance process, responding to many requests from the SGA and All Faculty Association (AFA).

Members of the faculty union also spoke during the public comments section, offering their take on the current budget deficit and the shared government process.

Dr. Brenda Flyswithhawks said, “Although there is much talk about shared governance, there is not much listening being experienced and even less action being taken. The ultimate betrayals for faculty and staff are when we feel devalued by the district and especially when the board of trustees appears to be oblivious to it all.”