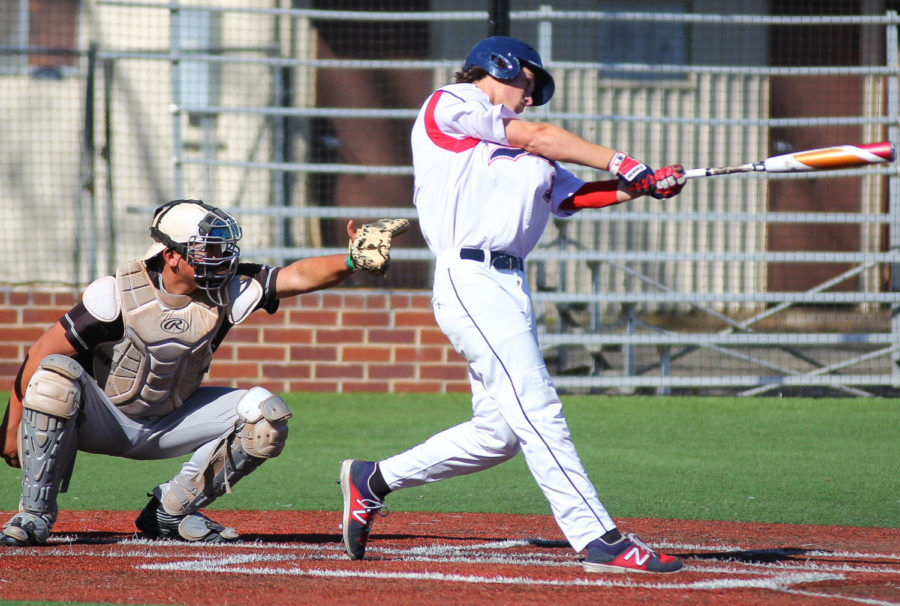 Sophomore Ben Sanderson goes up to bat against Diablo Valley College on March 27.

The Santa Rosa Junior College baseball team registered a season-low four hits in their 4-1 loss to Diablo Valley College (DVC) March 27 at Cook Sypher Field. The Bear Cubs’ (17-6) offense was uncharacteristically lackluster and invisible until the bottom of the ninth inning, when DVC had them with their backs against the wall.

“It was way too average of pitching to have that poor of a performance to be honest with you. We had opportunities we didn’t take advantage of,” said head coach Damon Neidlinger .

Back-to-back batters reached base in the ninth inning after being hit by errant pitches. A single from pinch hitter Eric Parnow had the bases loaded, setting the scale for grand comeback. Newly appointed lead-off hitter shortstop Hance Smith drove in one of the runners, but the comeback was too late.

“Hance has better stats when batting with no runners on than the guy who was in lead off,” Neidlinger said.  “Hance has been more consistent all season and he’ll stay there for a little bit.”

It had been two years since SRJC was last held to four hits in a game.

“We took some good swings and hit some balls hard that were outs, but we just need to get better every day,” said catcher Cole Brodnansky. Only two players, first baseman Joe Canepa and designated hitter Jo Bynum, managed a hit through eight innings.

The Bear Cubs struggled batting in the players that did make it to base. They stranded eight players in scoring position. Assistant coach Tom Francois said, “You leave the bases loaded three times and you only come away with one run, that’s not good.”

Starting pitcher Shamus Lyons was almost perfect through four innings, only giving up two hits and striking out one before losing his control in the fifth inning.

The Vikings’ hitting parade was inaugurated with a standing double that hopped over the fence. The ensuing batter brought the runner home on a RBI single up the gut of the Bear Cub defense to take the first lead of the game.

An additional three players singled, resulting in three runs scored for DVC. They accumulated five hits before ending the inning with a 4-0 lead.

“Baseball is a game of adjustments and you to have to be able to adjust. We didn’t do a very good job of adjusting at all from a consistency standpoint,” Neidlinger said.

Four other SRJC pitchers picked up from where Lyons’s excellent start left off.

Trenton Darley threw a total of 14 pitches with a strikeout before exiting early in the eighth with an injury. “He landed awkwardly during a pitch and strained is glute/hip area,” said pitching coach Jon Nadale. “We were being precautious and as of now hes day to day.”

Patrick Strickland-Keamoai replaced the injured Darley and finished the rest of the game on the mound for the Bear Cubs in their loss. He picked up his tenth strikeout in his seventh appearance as a closer

The SRJC Bear Cubs continue their series against the DVC Vikings (12-16) at 2:30 p.m. March 29 in Pleasant Hill, California.