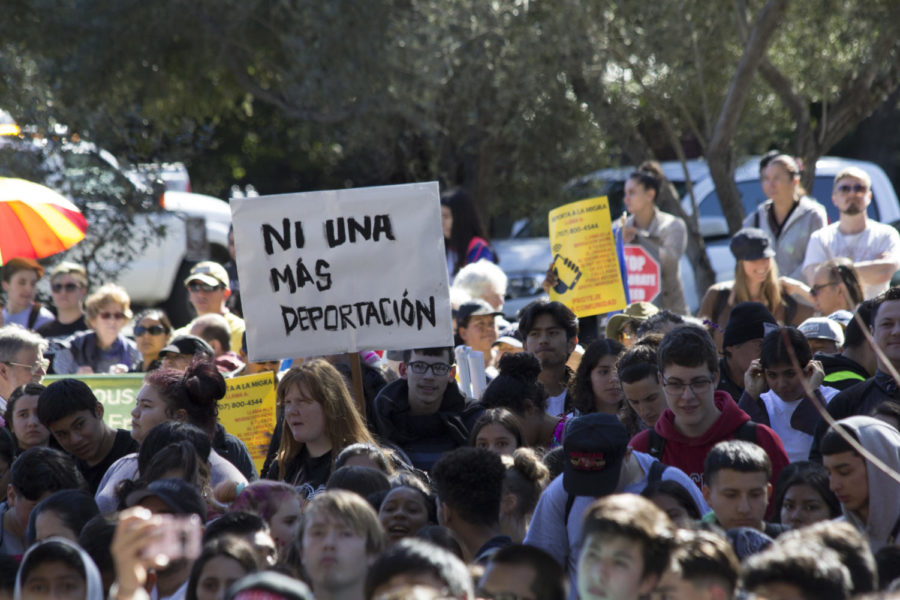 The Trump administration revealed its plans to roll back DACA renewals in September by setting a deadline of March 5 for Dreamers to renew their TPS. In January a Ninth District appeals court judge ruled that the Trump Administration’s efforts to end DACA violated the Administrative Procedures Act.

The Obama-era program allowed children born of undocumented parents in the United States to have TPS, with the requirement of having to renew it every two years.

The walkout for immigration reform began at 11 a.m. in the main quad of SRJC’s Mendocino Avenue campus. Community leaders like Rafael Vasquez offered support for undocumented citizens and provided handouts with trusted immigration lawyers to onlookers.

More than a thousand people marched from SRJC to Courthouse Square and then to City Hall carrying picket signs that read: “Dreamers will be deported. What will you do?”  and “Education not deportation.”

One participant, Julio Cesar Molina, 31, talked about how the fear of losing TPS has rocked North Bay communities. This is why he joined an advocacy group called Rapid Response Network.

The group monitors immigration and reports when possible raids may be occurring and where they are planned to take place. If members see ICE, they can report it to a hotline that operates 24/7.

“Someone in your language will answer,” Molina said, noting that the organization has more than 400 volunteers. “Some are American born, others are Hispanics that are joining together for this project.”

Molina said they have members with backgrounds in law enforcement who help them better understand the legal system and deal with ICE more efficiently.

If the head of a family gets deported, the organization provides the family with the last paycheck as well as food, legal aid and financial aid.

At the Federal Building on Sonoma Avenue, student representatives made demands through a bullhorn, calling for a clean Dream Act that gives DACA students a permanent solution to their migratory situation that includes a pathway to citizenship. They want Congress to approve the Dream Act without any added conditions against immigrants that will harm their families and the communities.

Protesters cheered the demands and jeered rehearsed comments by an actor playing Senator Dianne Feinstein, shouting “You serve us! You serve us!”

“I myself am undocumented, and I’ve lived my entire life here,” he said. “I feel like I’ve definitely contributed to society and to my community. My brothers are both very ill. They both have a heart condition and unfortunately if my parents were to get deported and we find ourselves in Mexico, I fear that my brothers wouldn’t get the care they need.”

Carrillo’s father was deported to Mexico in 2012, making this issue very personal.

“I am not undocumented, but I am one of the individuals who was separated from their family,” Carrillo said as she wiped away tears. “This is why I continue to do the work I do now. I am here today to advocate for my father’s voice, but also for every single one of the 11 million undocumented individuals here in the United States.”