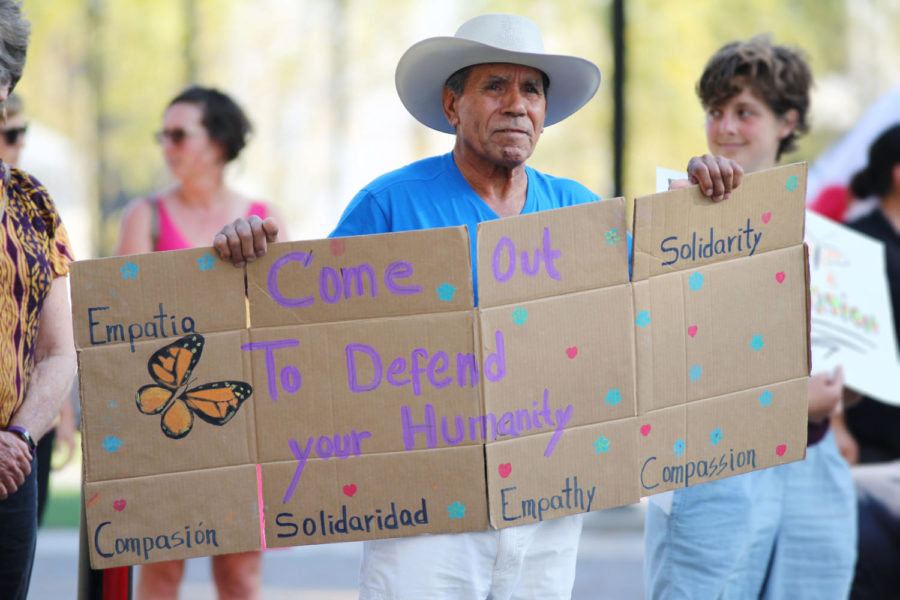 Six years ago, Alexia Carrillo’s world was turned upside down.

“Imagine spending your whole life with someone and in seconds they are taken away where you may never see them again,” 21-year-old Carrillo said, whose father was deported under the Obama Administration.

Carrillo is the vice president of advocacy for the Santa Rosa Junior College student government. “I feel scared,” she said. “Although I am not undocumented, I am worried for all undocumented individuals who have to face the reality of fear through deportation, threats, and the separation of families.”

Carrillo, who volunteers to aid undocumented communities both on and off-campus, is working with the student group Movimiento Estudantil Chicano de Aztlan (MEChA) to coordinate a March 5 event called “Walk Out for Immigration Reform” in support of all undocumented immigrants. The walk out is for student recipients of DACA, individuals with Temporary Protected Status (TPS) and others who may be discriminated against.

Uncertainty stems from comments made by President Trump and his administration, which ends renewal applications for DACA recipients starting March 5.

With the expiration of the program, increased activity by ICE, a divided Congress and the Trump administration’s shifting policies on immigration, the possibility of deportation is becoming increasingly worrisome for undocumented students, former DACA recipients or otherwise.

For recipients of DACA like former SRJC student Karime Sanchez, every day in the United States is meaningful because every day may be numbered.

Sanchez, who majored in psychology, made plans for her academic career based on her DACA statues, but with the program’s repeal those plans are up in the air.

“Plans made over the years are on hold,” Sanchez said.

“The available jobs with only a B.A. in psychology are only a few, with low pay until you work your way up,” Sanchez said. “But that takes time— time I may not have in this country.”

The group serves undocumented students at SRJC and has plans in the event of a raid.

Rafael Vasquez, Extended Opportunity Programs and Services (EOPS) coordinator and MEChA adviser, said, “I have a plan, but the information is only being made available to the affected students and those involved in the plan. No public details are available, as we would not want immigration to know what our response plan is.”

He also said undocumented students should report any discriminatory or hateful behavior by SRJC employees to Hilleary Zarate, manager of student life and engagement programs.

“Our students have the right to be here and be supported by all employees of the institution as per state law,” Vasquez said.

Hector Jimenez, president of MEChA, said his and other organizations have been supportive in preparing undocumented students and connecting them to community resources that assist in deportation defense cases.

“Overall, MEChA will stand in solidarity with the undocumented community at all costs,” Jimenez said.

Student leaders like Jimenez work with the Know Your Rights Commission to help those at risk of deportation learn how to deal with ICE. Jimenez said the group helps in child custody cases where the parent is undocumented and the children are American.

“The parents would essentially lose their US-born children as they would be placed into foster care,” Jimenez said.

“It is extremely difficult for these parents to get their children back if they are detained or being deported. We have not heard of many parents, if any, who were able to get their children back. It’s important to teach them about their rights, because unfortunately we have noticed that ICE is not respecting individuals and is violating their rights.”

The work is personal for many student officials working to protect undocumented students and residents.

Jesus Juarez, MEChA club member and DACA recipient who is fighting for immigration reform said, “The push for clean reform continues on the daily. Its harsh and inhumane to have wiped out the Dream Act.”

Juarez added, “It’s time that we advocate for ourselves and not have anyone talk for us, because in the end who will lose or benefit from it? Us, the people!”

Last year SRJC, along with the majority of other community colleges, passed a safe haven resolution. The resolution prohibits the campus from releasing personal information about students’ immigration status, without a court order, judicial warrant or subpoena.

It also prohibits professors and other campus employees from outing undocumented students and campus police from questioning or making arrests solely on a person’s immigration status.

“We’re not in it alone,” SRJC President Frank Chong said. “We’re not just one college. The State Chancellor’s Office, which is the governing body for all the community colleges, passed a safe haven resolution.”

The resolution exists on a number of levels, from the state to the county, community colleges and SRJC. “It’s consistent where we’re not going to be cooperating with ICE and we really want to discourage people from coming on campuses to roust students,” Chong said.

Chong gave assurance that ICE does not have access to school records from SRJC. He couldn’t say if they have other avenues or methodology to get the undocumented students’ records.

Chong said he stands by undocumented students, regardless of whether DACA is repealed. “We’re just going to treat them as they have been. We’re going to welcome them and support them and hope they maintain and stay in school.”

SRJC International relations major and DACA recipient Vanesa Valdivia, 23, said she didn’t realize how beneficial DACA would be for her.

“I didn’t really think about the fact that I didn’t have a social security number and that my options to find a good job—or at least a job that wouldn’t be too hard— would be really difficult,” she said.

“The fact that I was able to get a good job at Santa Rosa Junior College working in the ESL department as a cultural liaison, a teacher’s assistant and also in the front desk, was something that I wouldn’t have been able to achieve if I didn’t have DACA,” Valdivia said.

Validiva said she is frightened, frustrated and confused and she feels let down by a place she’s worked so hard to be a part of.

“I’m nervous— I feel anxious of what might happen in the future,” she said. “I feel like I’m doing something wrong as if we all didn’t deserve a chance in this country when all we do is go to school, work hard every day, and do what the government likes the most: pay our taxes and contribute to this country.”

Until the federal government acts, all Valdivia and other undocumented SRJC students can do is wait.

Many families in Sonoma County are dealing with the looming threats of deportation and its devastating fallout. While some exist in a sort of limbo status, students like Carrillo have already faced the pain of deportation and are determined to help others avoid a similar struggle.

“I know how that feels and would hate to see someone else go through the same thing,” Carrillo said. “This is the reason I do what I do, because I care.”