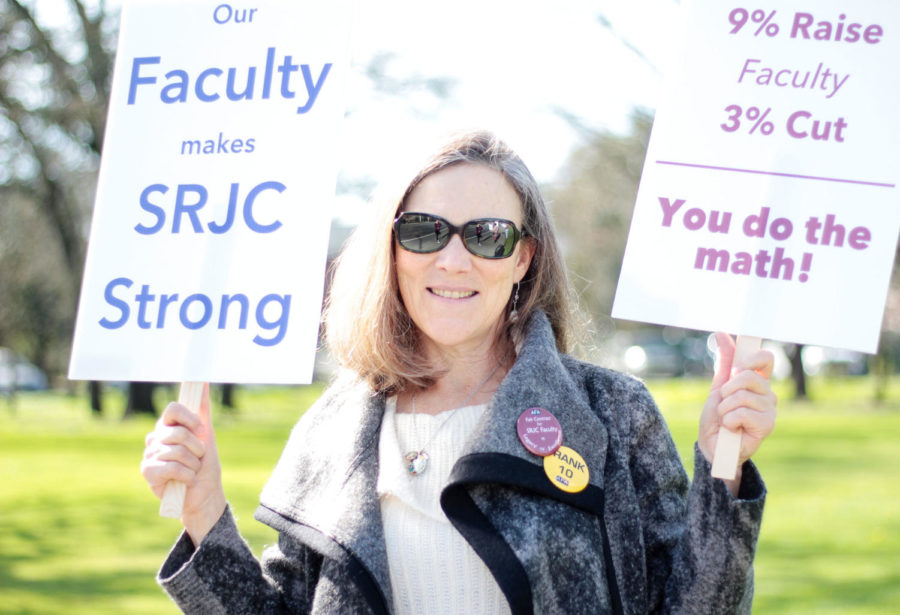 Members of the All Faculty Association (AFA) began a picketing campaign on Wednesday, Jan. 31, 2018 intended to spread awareness of strained contract negotiations over faculty pay after the Board of Trustees voted to increase management salaries at the end of the fall semester.

The picketers passed out flyers and displayed signs that read, “Our faculty makes SRJC strong” and “Administration 9 percent raise. Faculty 3 percent cut. You do the math!” on Elliot Avenue.

The AFA is fighting to preserve “Rank 10,” a long-upheld method that determined faculty salaries and promised competitive pay similar to the tenth-highest paying district in the state.

“What we’re asking for is something that we’ve already had,” said Michelle Van Aalst, an English instructor and picketer.

Negotiations between the AFA and the District are at an impasse because the District’s latest offer abandoned the Rank 10 methodology and revoked a planned 3.17 percent annual increase in faculty pay. Faculty members are also concerned with proposed changes to disciplinary procedures and the length of contracts.

“They want to renegotiate every year,” said Anne Donegan, chair of social sciences. “Right now there is a three year contract. Having to do that every year is just such a waste of everyone’s time.”

Donegan’s department recently announced it will boycott all centennial events this semester to protest the state of negotiations.

“I’m not saying administration shouldn’t have pay that matches the quality of the institution,” said Vince Bertsch, chair of engineering and applied technology. “But which one has a bigger impact in the classroom? It’s the faculty.”

Students like Maeve O’Reilly, 19, are skeptical about pay cuts to the faculty.

“It seems unfair to cut teachers pay when they dont get paid enough as it is,” O’Reilly said. “Teachers have a greater impact on students than administration does.”

Beau Besancon, 22, said, “If teachers get paid less they’ll probably want to go somewhere where they can make more money.”

The AFA said it will start “Rank 10 Wednesdays” and picket to inform students, faculty, staff and administrators of their position.

President Frank Chong said in a Jan. 25 email that when he arrived at SRJC in 2012, administrators were leaving SRJC to accept higher paying positions in other districts, and faculty at the time were unwilling to transition to administrative positions because they paid less than their current teaching jobs.

Chong said that he often had to visit the Board and ask for additional funding to entice prospective applicants. At the time, California was suffering a budget crisis that Chong said made it inappropriate for him to propose increases to administration salaries.

“The reason I took this matter up was to make a long overdue adjustment to make our Management salary schedule competitive again. The decision to make Management salary adjustments is never a popular one, but I felt it was an equity issue,” wrote Chong.

A transition plan was developed by Vice President of Human Resources Karen Furukawa and Senior Vice President Doug Roberts that would, over a period beginning in January 2017 and ending in July 2020, gradually increase manager salaries until they reach the median level for the year of 2014-2015. Under this plan SRJC administrators would remain at least 2 years and as many as 5 years behind the current median salary for administrators in comparable districts.