‘We are not out of the woods yet’ 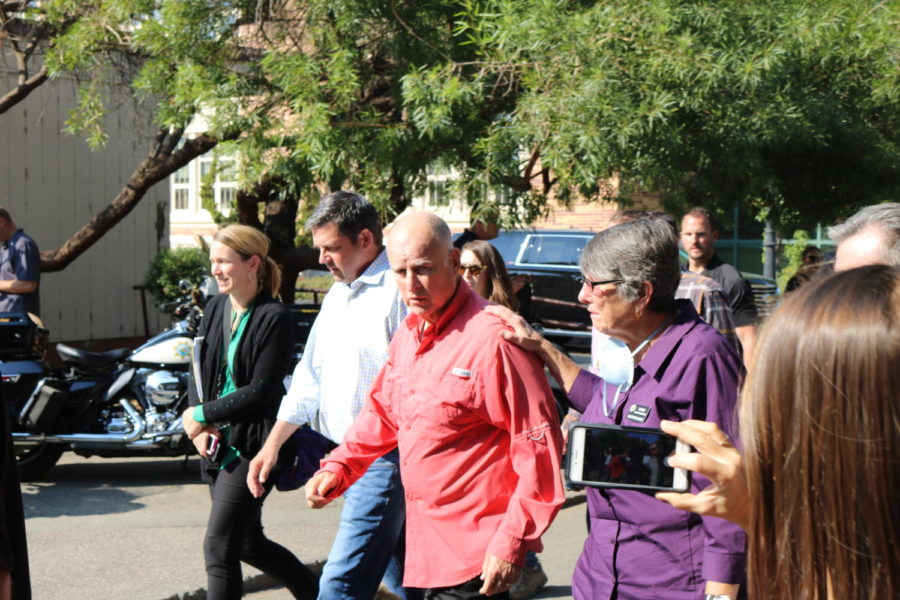 Senator Diane Feinstein said this is the worst fire she has ever seen as she and Governor Jerry Brown addressed the press at 2:30 p.m. Saturday at Santa Rosa High school about FEMA assistance and the work firefighters are doing.

“There is a fire fighting team here that is unparallel,” Feinstein said.

Firefighters from all over California and other western states have poured into Sonoma County to assist with the massive wildfires that broke out the night of Oct. 8.

“We have 10,000 firefighters across 16 fires today,” said Cal Fire Chief Ken Pimlott. “We are not out of the woods yet. We are in red flag weather conditions right now.”

Governor Brown and Senator Feinstein  moved to the south gym of SRHS to speak to the community alongside emergency officials.

Pimlott took over the meeting and began answering questions Santa Rosa residents raised about the crisis.

“There were two major hospitals affected by it, Sutter and Kaiser,” Pimlott said. “We are working diligently to get those up, hoping to be successful in a day or two. We repopulated 26,000 people yesterday in the Sutter Hospital area.”

Cal fire officials said, “One good thing we had from last night’s wind was that the Pocket Fire and the Tubbs Fire didn’t spread at all last night. This means were getting that much closer to containment.”

As FEMA arrived to help, individual assistance will be available at the Press Democrat building in downtown Santa Rosa at 427 Mendocino Ave.

“Make sure you are using everything FEMA has to offer. There has been so much encouragement coming out of this community,” said Senator Kamala Harris.

According to FEMA representatives, affected area residents should apply for help  online at disasterassistance.gov or call  1(800) 621- FEMA.

Undocumented residents are eligible for FEMA as long as one member of the household is a U.S. citizen. Other assitance is available through the county at the local assistance center.

Many community members asked about the problems surrounding Nixle and SoCoAlert.

One resident, who lost her home on Mark West Spring Road, stated that the Soco alert she received had vague language on whether or not to immediately evacuate.

Giordano said this is an opportunity to improve our alert notification system for future incidents and advised all in attendance to sign-up for Nixle and SoCoAlert.

Many residents want to know when they can return to their homes, whether destroyed or not.

“We have a high priority to get everyone back in their homes but it does take sometime,” said Santa Rosa Fire Chief Tony Gosner.

Emergency officials are trying to make neighborhoods safe, however, there many factors that effect how long it will take.

Crews are working to shut of gas lines, replace power lines, clear unsafe roads and clear the area of hazardous material. Also, the foundation of destroyed homes are considered “hot beds” that could spread fire and danger anyone in the area.

Once residents are able to return home, the Red Cross will provide kits to aid in clean-up. Some items included will be rakes, shovels, sifters, N 95 particle masks, eye drops, wet wipes and other supplies.