We Shall Overcome: Sonoma County Unites in Wake of Inauguration 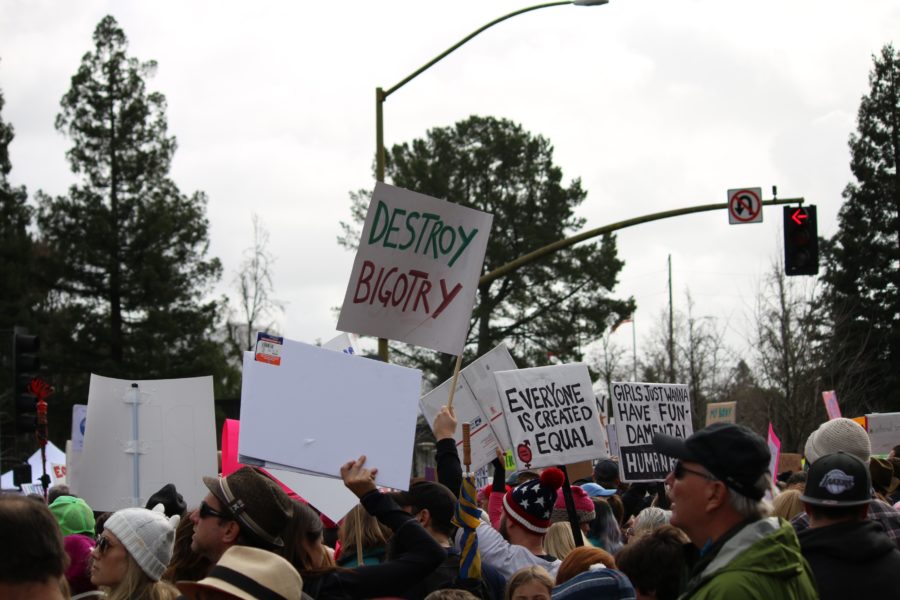 Raindrops fell gently from the skies as the chorus of Hallelujah echoed through downtown Santa Rosa. The moment captured the essence of American people, 5,000 voices melting into one, each voice passionate in its resolve.

The Santa Rosa Women’s March travelled from city hall to the intersection of 4th and B streets. City officials estimated that over five thousand people weaved their way through the half-mile route.

The attitude of the day was one of hope and resilience; each speaker who took the stage spoke about the importance of coming together to overcome any obstacle. Congressman Jared Huffman, who donned a “pussycat” hat in support of women’s rights vowed to fight passionately and with dogged determination for universal equality. Huffman praised the crowd for exhibiting undying spirit and unyielding hopefulness in the face of turbulent times.

While those who attended the march turned out for a variety of reasons, the need for universal equality stood front and center in everyone’s mind. Petaluma resident Eric Fuge explained why he attended the march. “I marched in solidarity with others and to support a vision of a more inclusive America; one where women’s right, black lives, and healthcare rights are a priority.” Fuge said that it was great to see those in the community turn out like they did, and he feels hopeful that unity will overcome greed and negativity.

Sonoma State University student Elizabeth Harding said she attended the event simply because she believes in human rights. “I attended today because I believe in social justice and equality, and I believe that it is important to show up and be seen when it’s blatantly obvious that injustice is happening.” Harding described the march as incredibly positive. “I feel supported and hopeful after seeing all the people who came out to march all over the country today.”

Many participants in the march attended because they felt taking part in a world wide protest of injustice gave them more of a voice than they had when casting their ballots in November. Santa Rosa Junior College student Sophie Leveque-Eichorn was one of these people. “I marched in order to make my voice heard in Washington. I marched because I find it unacceptable that we have a president in the White House who is blatantly bigoted against others based upon sexual orientation, skin color and religion.” Leveque Eichorn said she was amazed by the sheer number of people who turned out for the march. “The march gave me great hope for the future, because I saw that our community is full of brave, resilient, and beautiful people who are not afraid to speak their mind and make their voices heard.”

Elena Lev, a student at Analy High School in Sebastopol, expressed her belief that critical mass and peaceful protests make a difference. “While I realize that marching today doesn’t change the results of the election, unity with others is the first step towards a better world,” said Lev. “It was incredibly heartening to see so many people rise in solidarity against the threat of division. I feel more hopeful for the future after witnessing the way our community came together to fight for our beliefs.

Speakers at the event included the aforementioned Huffman, as well as former Representative Lynn Woolsey and Rev. Ann Gray Byrd.