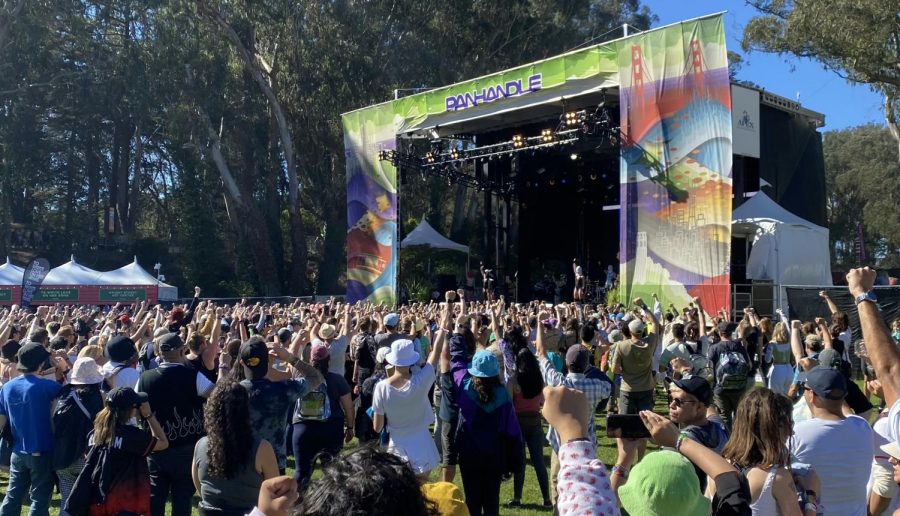 Concertgoers raise their fists in support of Ukraine as the country's national anthem plays during Pussy Riot's set at Outside Lands on Sunday, Aug. 5 at Golden Gate Park in San Francisco.

Outside Lands 2022 featured headliners SZA, Green Day and Post Malone, but artists like 100 gecs, Weezer and Mitski got audiences grooving, too.
The good
As large as the festival grounds are, there aren’t many places with nothing to do. From pop-ups to lounges to photo booths to flower booths, Outside Lands is simply a fun place to be. Stages large and small spread across the campus, so you’re never left without music or entertainment.

While the lineup’s key demographics tended to skew young this year, there was still something for everyone. The largest stages featured jumbo-sized performances, and smaller stages held more intimate shows.

The one stage that could’ve been better utilized was The GastroMagic Culinary Stage. The shows were good, but would be improved with the addition of a host to facilitate the experience and take some weight off the musicians and culinarians.

Speaking of culinary experiences, food and drink weren’t any more expensive than expected. The portions were tasty and generous enough to make up for the inflated festival pricing.

Eco Lands, the festival’s activism corridor, was an exciting, interactive place where groups like To Write Love On Her Arms, the LGBT Asylum Project and Garden for the Environment could spread the word about their missions.

“We’ve been coming to Outside Lands for five or six years, and we try to choose fun ways to educate the public about the environment,” said Trina Lopez, adult workshops program manager. “We’re trying to get people engaged with helping our planet by planting and gardening in healthy ways.”
The bad
The most frustrating part of Outside Lands is the amount of walking you’re forced to do, and the rough paths you’re forced to do it on. The festival’s large size necessitates an expansive site, and Golden Gate Park is an iconic and gorgeous location, but getting around the place was admittedly tough.

The festival also claimed to be cashless on its website, but required attendees to have cash to purchase products in Grass Lands. An ATM was available, but had a $5 fee.
Best place for a bite: Quik Dog
It’s not the most exciting pick, but Quik Dog, by SF bar Trick Dog, was the best thing I ate all weekend. A perfectly cooked, fairly priced festival food item that I ordered more than once and could still eat again. Their trick of slicing the hot dog down the middle before grilling is something I will be taking with me.
Best place for a sip: SilverGirls95
For anyone still watching old episodes of “The Golden Girls” on Hulu, and for anyone who loves to listen to vaporwave and reminisce about the 1990s, SilverGirls95 was the place to be at Outside Lands 2022. The pop-up featured delicious cocktails inspired by all four Golden Girls and a friendly staff to make them.
Best crowd: Phoebe Bridgers
Indie rocker Phoebe Bridgers didn’t play the main stage and wasn’t a headliner, but you might not know that if you had your eyes closed at her show. The crowd went wild for Phoebe’s every move; her vocal flourishes, her pauses and her smiles drew screams and applause from her adoring fans. Honorable mention to Mitski, whose crowd was similarly devoted.
Most promising: Paw Paw Rod and Salem Ilese (tie)
With only five songs released, Paw Paw Rod may seem like a strange choice for a 40-minute block at a music festival, but the young musician’s set explored hip-hop, soul and R&B in an explosive way. Rod’s musical wit, talent and charisma were on full display as he charmed the crowd with his full discography and a couple of unreleased tracks to boot. With a few albums under his belt, he’ll be a star.

Salem Ilese is a 22-year-old pop singer who’s not afraid to get heavy, both lyrically and musically. Her performance was fun, high-spirited and interactive, but left space for important topics like reproductive rights. Ilese is also clever beyond her years, with a great voice and a strong desire to do what’s right.

“[Artists] have a responsibility to talk about things that matter and have those hard conversations with people,” Ilese said in an interview with The Oak Leaf after her concert. “I hold that responsibility close to me.”

If she continues to keep a keen eye on pop culture and current events, her talent will take her far.
Best concert: Rina Sawayama
If you assume that all pop music is meaningless, cookie-cutter drivel that takes no skill to perform, then you haven’t seen a Rina Sawayama show.

The hyper-pop musician is something of a unicorn; someone who can sing, dance and work the crowd like a headliner, no matter the size of the stage. Sawayama commanded the attention of her audience like no other, drawing cheers and taking the breath of her audience with enormous, exhilarating cuts like “Comme des garçons (Like the Boys)” and her cover of Lady Gaga’s “Free Woman.”

Next time a festival considers Rina Sawayama for its lineup, it should be as a headliner and nothing less.