It was a “curious incident” to watch a live show again 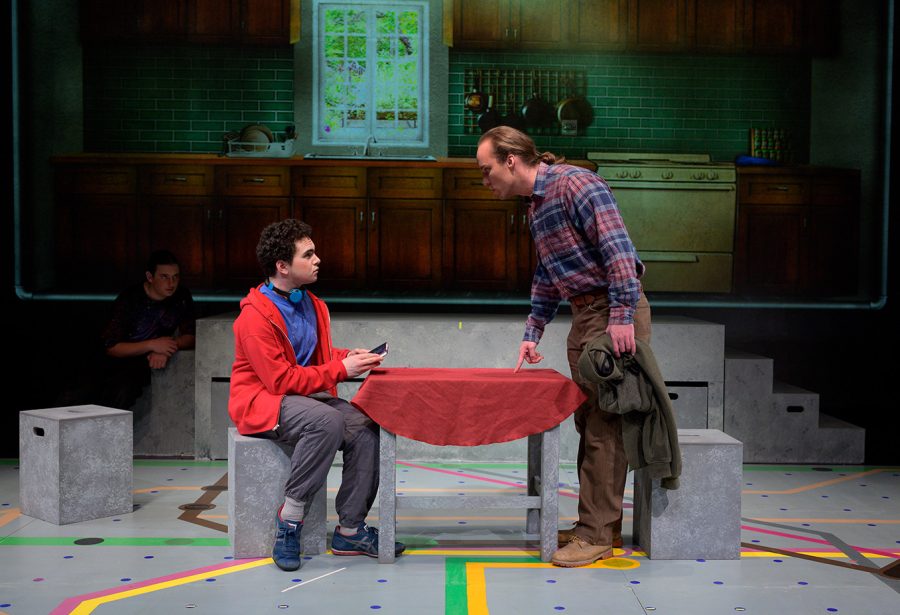 The Santa Rosa Junior College theater department’s performance of “The Curious Incident of the Dog in the Nighttime” was an unforgettable milestone for the cast and crew, as it was their first in-person performance since the start of the pandemic.

Despite some memorization issues, late cues and mispronunciations of intricate British phrases, this show was a celebration of the journey live theater has made since the coronavirus pandemic began.

The play starts with a young boy standing over his neighbor’s dog, stabbed with a garden fork, as the owner screams and accuses the boy of the murder. This is how we meet Christopher Boone, a neurodivergent English teenager who believes he is destined to solve life’s problems.

The stage floor was painted with red, green, blue and yellow lines, mapping the London train pathways. Three large projection screens served as a backdrop, and gray wooden blocks were stacked across the stage. Throughout the show, viewers were transported to outer space, flower gardens and the beach through the use of lights and images projected on the green screens.

Sound effects of car horns, ringing kiosks and microwave alerts echoed throughout the Burbank Theater. A melody setting the scene became familiar, as its repetition grounded us to the meaning of the play.

Sonoma Academy junior Theo Marvin played Christopher Boone, the lead character. In addition to a demanding rehearsal schedule, the 17-year-old high schooler is enrolled in honors physics and AP calculus classes. His mathematical mind connected him with Christopher on a level different than in prior roles.

“You see yourself reflected in the character,” Marvin said, explaining his personal experiences of living as a neurodivergent teenager. “The show represents autistic people in a positive light, and it was rewarding.”

The cast was hungry to be back together again, starved from the lack of human interaction for two years. Director Laura Downing-Lee was grateful to have collected a group of diverse individuals who powered through the work to get the job done.

“It was a wonderful company,” Downing-Lee said. “Each [member] had their own special story.”

Some cast members were seasoned actors, while others had never stepped foot on stage before. Though everyone’s performance was satisfactory, some actors stood out more than others.

Each member of the ensemble played at least three different supporting characters and helped to blur the line between props and set pieces. They were the connecting blocks of this cohesive performance and skillfully aided the production. Without them, the show would have been pointless. The nine-member ensemble was just as important, if not more than, the four lead characters.

The cast’s first technical rehearsal took place one week before opening night. Fortunately, there was no audience.

The rehearsal was chaotic as actors hustled down the stairs of the aisle and shouted to one another looking for a missing shoe.

But Downing-Lee ran a tight ship, and the crew eagerly awaited their next assignment geared toward smoothing the production. Tensions were high in the theater as the cast scrambled to piece together the production before opening night.

The cast came a long way between the Saturday rehearsal and opening night.

No performance is perfect, and it was a pleasure to watch human beings share connections with one another on stage.

During rehearsal, cast members expressed embarrassment regarding the state of act two. They mumbled that they were unprepared, with only one week to go. But by Saturday night, Downing-Lee and the cast had tightened up. Act two was far better than expected after watching rehearsal.

Theater must have spontaneity. Over rehearsal creates a lifeless routine that sometimes cannot be broken. The play then simply becomes people standing on a stage saying irrelevant sentences. Actors can only bring the words of a play to life if they are truly listening and reacting to one another.

In the second act, cast members were thinking on their toes and truly living in the moment. They reacted to one another on stage, being present and truly listening, elements lacking in the first act. The act one routine had been broken, and fresh air filled the theater.

Regardless of flaws, the eventful and magical moments of “The Curious Incident of the Dog in the Nighttime” moved mountains of what the world calls live theater.