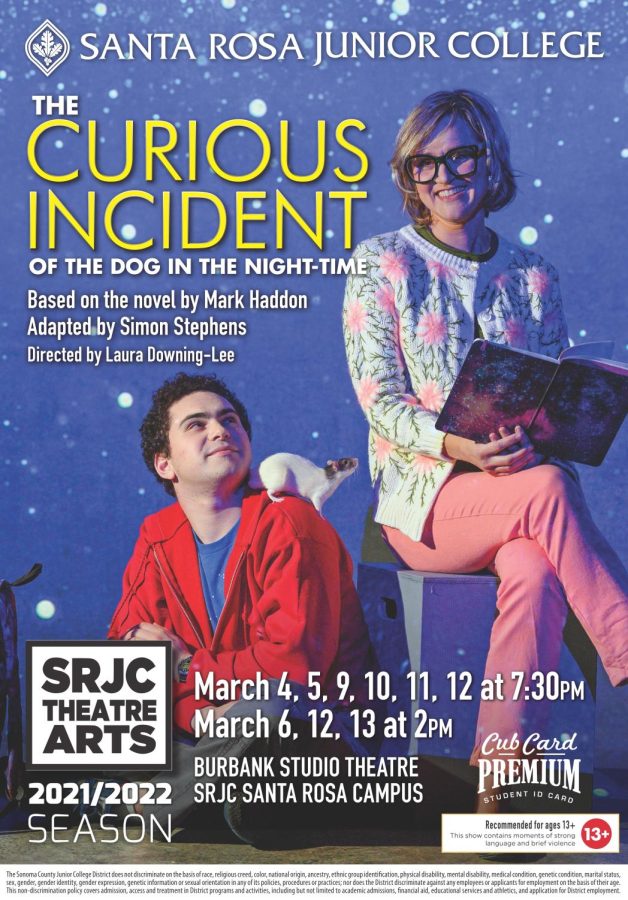 SRJC's theater department will host its first in-person production in more than two years with “Curious Incident of the Dog in the Nighttime” at Burbank Theater March 4-13.

The Santa Rosa Junior College theater department will host its first in-person production in more than two years with “Curious Incident of the Dog in the Nighttime” at Burbank Theater March 4-13.

Director Laura Downing-Lee said “it was magical” to be back in the studio theater with the cast. The first week of rehearsals were on Zoom but evolved to in-person practice.

Adapted from the 2003 novel by Mark Haddon, the play takes place in London and centers Christopher Boone, a neurodiverse 15-year-old who navigates the world around him while trying to solve the mystery of how the neighborhood dog died.

“Christopher’s mathematical abilities allow him to solve life’s problems, though he struggles with communication and trust of the world around him,” Downing-Lee said.

The cast of 13, many of whom have never performed in a play, is composed of SRJC students from all ages and backgrounds. From a physician to a retired district attorney, this diverse cast has worked together to welcome the community back to the theater.

The actors will perform maskless, though audience members need to be fully vaccinated and masked while inside the theater. Downing-Lee and the cast are taking precautions to ensure live performances continue, including regular testing and vaccination requirements.

“We have a plan if one of the cast members tests positive, but we do not want to implement it,” Downing-Lee said.

Patrons can purchase tickets online at https://srjc.universitytickets.com/w/event.aspx?SeriesID=7, by phone (707) 527-4307 or one hour before showtime at the campus box office in the Burbank Theater lobby. Tickets are $25 for the general public. SRJC students and faculty are eligible for discounts.