Despite intriguing story and legendary cast, “House of Gucci” fails to entertain 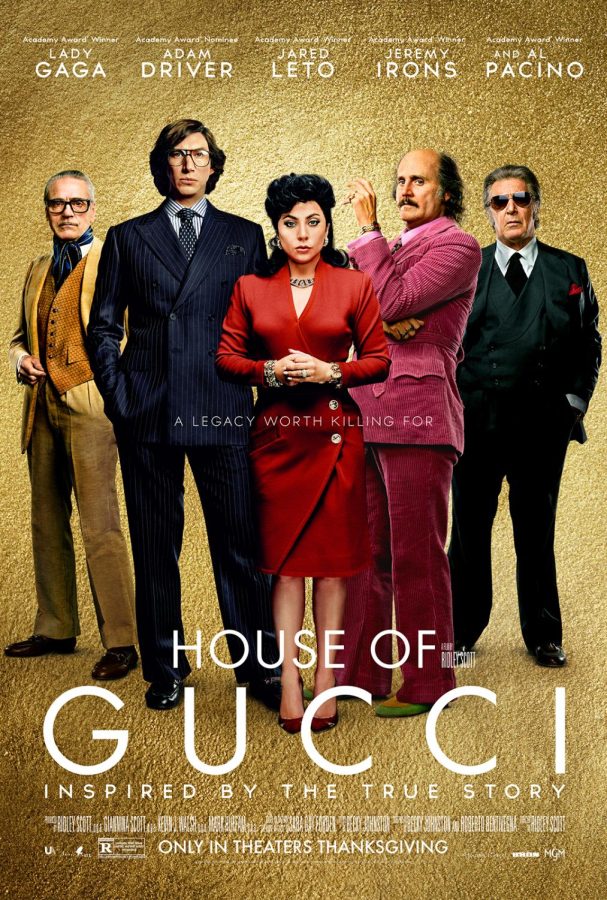 "House of Gucci" does not live up to the expectations teased in the exciting trailer, but instead delivers a slow, vapid and falsified rendition of the Gucci family story.

When a star-studded cast, an experienced director and a drama-filled storyline come together, you would expect a masterpiece. Unfortunately, Ridley Scott’s 2021 “House of Gucci” falls far below expectations.

The film’s 165 minutes — which could have benefited from another run-through in the editing room to cut at least 30 of those — details the biopic storyline of the Gucci family’s tragic demise. It begins in the ‘70s with Patrizia Reggiani’s maniacal involvement, runs through Maurizio Gucci’s murder in 1995, and ends just after Reggiani’s conviction.

The film was created around Sara Gay Forden’s 2000 novel, “House of Gucci,” which covered the timeline of the Gucci family. Forden also used Gerald McKnight’s 1987 novel, “Gucci: A House Divided,” to detail the drama, shady dealings and hardships from long before Patrizia and Maurizio’s story.

“House of Gucci” seemingly has the components to make an incredible film. Its trailers promise a fiery, fast-paced romance with Adam Driver as Maurizio and Lady Gaga as Patrizia. Jared Leto and Al Pacino also grace the previews with larger-than-life performances.

While the actors meet expectations, despite some pretty painful Italian accents, the pace, script and approach fall short.

Known for his sci-fi, twisted and intense storylines, as seen in “The Martian,” “Blade Runner,” “Thelma & Louise” and many others, Scott clearly knows how to direct a phenomenal film. It seems that the film’s faults stem simply from Scott being a director with seemingly no connection to fashion.

With a plot surrounding one of the top international fashion brands and scandals that are still talked about today, you would expect an extravagant, gripping, oh-my-god-she-did-not-just-do-that type of film. Instead, viewers are met with drabby set design, bland fashion — despite having decades of Gucci archives on hand — and scenes that feel unnecessary and vapid.

If you know nothing of the history of Gucci, it would be easy to write off the dull nature of the dragging scenes as the result of uninteresting source material. But that is far from the truth. Forden and McKnight’s novels include dramatic stories that were, for some unknown reason, completely ignored for the film and instead replaced by fictionalized representations of conflict.

In July 1982, Aldo, chairman of the fashion brand and son of founder Guccio Gucci, got into a physical altercation with his son, Paolo, who was trying to sway the company toward modernized fashion designs. The fight made international headlines and led to a $200,000 settlement Aldo paid to his son in damages.

In “House of Gucci,” however, this dramatic strife is replaced by a jarring scene of Paolo peeing on a Gucci Flora scarf out of spite, which was included because of the scarf’s role in the brand’s fame. As much as this fictionalization represents the tension in the family, I personally would have relished a scene with Aldo hitting Paolo over the head in blazing anger with ashtrays and a tape recorder.

The portrayal of the drama isn’t the only aspect that robs the real story from the film. The protagonist couple, Maurizio, grandson of Guccio Gucci, and Patrizia, a social climber from a poor background, come across as flat on the screen, despite the marvelous actors playing them.

Adam Driver’s Maurizio is a bland, unlikeable swindling businessman who is indifferent to the Gucci brand. In real life, Maurizio was passionate for the luxurious company and led an exciting, extravagant lifestyle, which is hardly even nodded to throughout the movie.

Lady Gaga’s Patrizia feels one-dimensional. But the real woman was cunning, intelligent and terrifying, as seen through her numerous maniacal diary entries and death threats to Maurizio after he suddenly left her and their two daughters for another woman. Instead, Gaga’s Patrizia is shown as a lonely, crazed, money-hungry woman desperate for attention who finally kills her ex-husband by hiring hitmen.

Possibly the biggest fault on Lady Gaga’s part was her refusal to meet with Reggiani to prepare for the role, saying that she didn’t want the murder to be glorified. Yet, she still took part in a film based on a dramatic recount of it.

Perhaps if Lady Gaga had met with her, she would’ve at least taken the creative liberty to include Reggiani’s famous quote, “It’s better to cry in a Rolls-Royce than be happy on a bicycle,” instead of Gaga’s awkward, fictitious, “Father, Son and House of Gucci” line. It seems as if being an Italian-American and fashion-obsessed woman were her only prerequisites for this film.

“House of Gucci” was geared to be the new answer for when someone asks for a favorite movie. However, it was a letdown through the screenwriting, directing and design, and it seems the Gucci heirs feel the same way.

It should have taken the glamorous and campy route, but Scott flounders with the material and dishes up a cold piece of disappointment. Perhaps if a different director had taken the reins on this project, we wouldn’t wonder what could’ve been. But, for now, “The Assassination of Gianni Versace: American Crime Story” on Netflix can fulfill the desire for a colorful, dramatic fashion crime story.