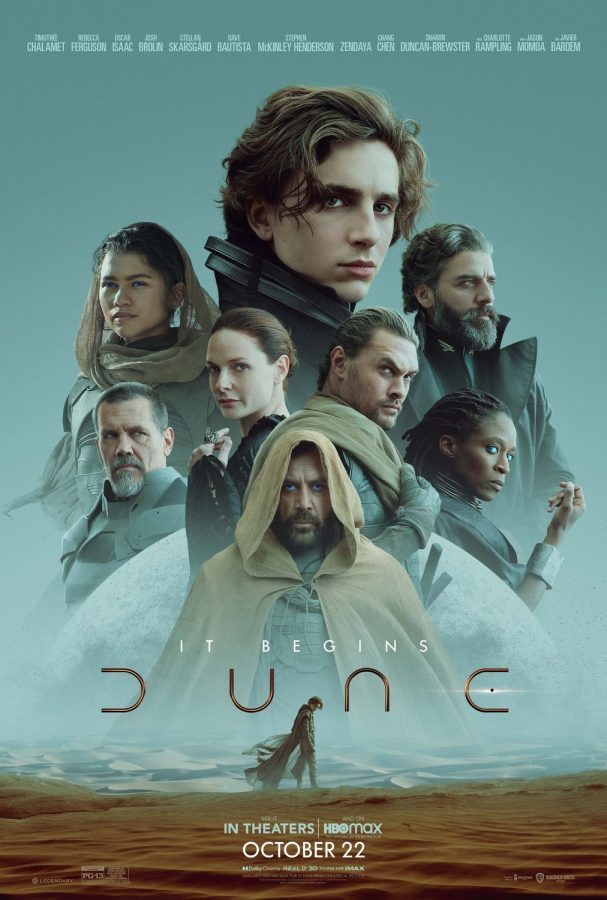 Villenueve’s vision of “Dune” respected the original material in a way that perhaps only he could execute and calmed fans’ fears that the novel would never be properly adapted.

After years of waiting, Academy Award-nominated director Denis Villeneuve’s “Dune” is finally upon us, and it has delivered on nearly all expectations. The film has set the bar high for both the eventual second part and science fiction storytelling as a whole.

“Dune” is the first film of Villeneuve’s two-part series based on the 1965 sci-fi novel of the same name, written by Frank Herbert, who worked for the Press Democrat for several years in the early 1950s. This is not the first time the classic story was adapted to film, however. In 1984, David Lynch’s version released in theaters, but failed commercially and was poorly received by both critics and audiences alike.

Before the 1984 film and even moreso since, many critics and fans believed “Dune” was too complex a story to adapt thanks to Herbert’s sprawling universe and masterful worldbuilding. Without a doubt, the epic was extremely challenging to replicate on film. This was one of my primary fears; I was concerned the plot would be too complicated to understand within a two-and-a-half hour runtime. I worried the complexity would render this new installment forgettable.

After about thirty minutes, “Dune” threw all of my fears out the window and made a name for itself as a shining example of how to properly “show, not tell” in a complex sci-fi world.

“Dune” is set in the year 10191 and told primarily from the perspective of Paul Atreides, played by Timothée Chalamet. Paul is next in line to power in the Atreides family, which rules over the planet Caladan as one of the most powerful families in the entire galactic empire, referred to as the Imperium. Paul is plagued by recurring dreams that seem to tell the future; this becomes more relevant as the story goes on.

Paul’s father and the head of the Atreides family, Leto Atreides (Oscar Isaac), is assigned by the emperor to rule the planet Arrakis, replacing the brutal and dangerous House Harkonnen. Arrakis is a world of harsh deserts and terrifying sandworms inhabited by the Fremen, a mysterious people who have adapted to the environment to make it their home.

The planet’s main attraction to its rulers is the “spice” that it natively supports all throughout the desert. Spice is a drug with miraculous properties that can increase a user’s lifespan by up to three times and awaken parts of the mind, while also being an essential part of interstellar travel. The spice is harvested via giant, complex machinery and silos and is one of the most important economic and political sources of power in the empire.

“Dune” establishes this base for the story within about an hour in a way that seems overwhelming initially. However, these concepts quickly become clear as the tension begins to build and sudden twists change your expectations entirely; that is, if you are unfamiliar with Herbert’s original story.

Villeneuve has created intricate and fascinating sci-fi worlds before, such as in “Arrival” (2016) and “Blade Runner 2049” (2017). His experience is evident throughout this new release and is without a doubt one of the main factors in the film’s success.

One of the reasons the 1984 adaptation failed was because it tried to cram a full length novel into a two hour and 17 minute film, which was a recipe for disaster. Villenueve’s decision to split the narrative into two films was critical for its success.

The film’s two-and-a-half hour runtime covers approximately the first half of the book, which lets Villeneuve take his time explaining with care each of the most important foundational parts of the universe.

I found myself getting chills as Paul explained the significance of the spice for the first time or as the film showed the first hint of the infamous Arrakis sandworms. I was ecstatic to slowly digest each iconic piece of Dune’s world without feeling rushed to the next plot point.

The theater experience that we’ve missed throughout the pandemic is crucial to fully appreciating the beautiful audio and visuals of the film. While “Dune” is also available on HBO Max, I would encourage you to watch it on the big screen, or even better yet in IMAX, as it was meant to be screened.

The universe’s massive scale was backed by another masterclass in scoring from legendary composer Hans Zimmer and phenomenal sound design that I felt lucky to experience. Each of the most intense moments gave me goosebumps, like the first sandworm encounter. The theater’s booming and powerful surround sound added an extra level of tension. I would recommend everyone go out of their way to see and hear it for themselves.

Timothee Chalamet and Oscar Isaac are joined by an all-star cast including Josh Brolin, Rebecca Ferguson, Jason Momoa, Dave Bautista and Zendaya, a surprisingly great combination of familiar faces. While each is a fantastic actor on their own, mass conglomerations of A-list Hollywood talent can sometimes feel too forced and end up being a dud, but I found that each actor fit their part without exception and brought their intricate character to life.

The film’s visuals are one of the best examples of high-budget CGI in recent memory, putting many AAA films to shame. Each of the planet’s wide shots felt as real as you could imagine from reading Herbert’s own descriptions. The heart-pounding action sequences both looked great and were well-choreographed. The sets’ architecture was impressive as well, feeling simultaneously futuristic and realistic. This was all backed up by Greig Fraser’s excellent cinematography. Fraser worked on films including “Rogue One: A Star Wars Story” (2016), “Lion” (2016) and on the upcoming “The Batman” (2022).

On the whole, “Dune” is a memorable achievement in science fiction film and will undoubtedly be a reference for many high-scope projects in the future.

Villenueve’s vision of “Dune” respected the original material in a way that perhaps only he could execute and calmed fans’ fears that the novel would never be properly adapted.

The film ends somewhat abruptly after what felt like the shortest two-and-a-half hours of my life. It never lost my attention, which is impressive for a film of this length. I patiently await the second part, which has a tentative 2023 release date. More than anything, I am so happy to say that “Dune” lived up to the hype and is an adaptation of which the late Frank Herbert would assuredly be proud.