SRJC Theatre Arts presents an homage to the supremely nerdy with “She Kills Monsters: Virtual Realms” 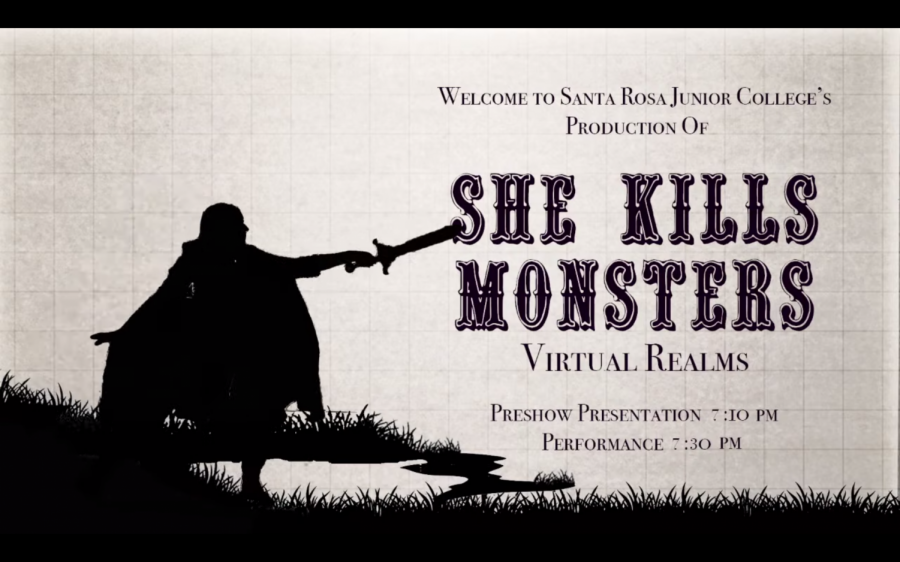 The play, written by Qui Nguyen, debuted in 2011 and has developed a theater-and-role-playing-game-obsessed fanbase. It follows the journey of high schooler Agnes Evans as she dives deep into the world of Dungeons & Dragons to re-connect and learn about her recently deceased sister Tilly.

Despite the pandemic, Director Leslie McCauley and the cast and crew put their hearts into translating the live theater experience into an online remote setting. From the lovably goofy character Chuck, played by Mario Herrera, to the hopeful heroes Tilly and Agnes, played by Lizzy Bies and Claire Grodrian, “She Kills Monsters” has something for everyone, and leans into its best and dorkiest qualities. The choreographed fight goes over quite well, and the chemistry between the characters remains present even in individual cameras.

Though the production opens with the surprising and tragic death of Tilly Evans,  Gwendolyn Phair ropes you in with clever narration in a self-aware tone that winks at the audience and eases them into the play’s world. Effectively simple animations and maps guide us through our journey, accompanied by ‘90s jock jams from the likes of Kriss Kross, No Doubt and The Offspring. There’s even a choreographed dance battle with demon cheerleaders later on. Seriously.

While bookworm Agnes’ friends begrudge her, she goes through with the game anyway and meets characters such as Lilith, played by Corynne Spencer, Kaliope, played by Adrianna Rasmussen and Orcus, played by Alex Delzell. She also is able to interact with her sister’s character, Tillius, as they search for her lost soul and defeat a five-headed dragon.

Demon cheerleaders Estefani Chavez and Lorelei Voegels also appear and bully Tillius to reveal the diary-like reality of Tilly’s Dungeons & Dragons storyline. Themes of sexuality and gender identity show themselves, hinting that Tilly identified as someone she could express in the game and not in the real world.

It serves as a wonderful ending to a hilariously geeky play put on by the brilliant cast and crew of SRJC Theatre Arts. Director Leslie McCauley and team should be quite proud of the quality performances, costumes and production design presented in “She Kills Monster: Virtual Realms.”

Whether or not live Zoom performances are new to you, SRJC certainly has a knack for them now. “She Kills Monster: Virtual Realms” will surely cast a magic spell on your screen.

Upcoming performances are 7:30 p.m. March 12 and 13, and 2 p.m. March 14. Tickets can be found at https://theatrearts.santarosa.edu/buy-tickets-online.