The most and least casually dressed celebrities “at” the Golden Globes 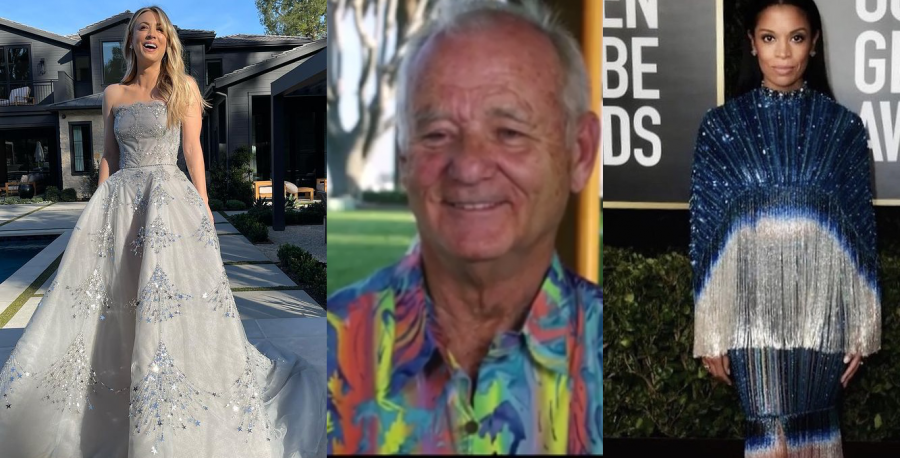 The Golden Globes went virtual this year, giving stars the creative freedom to either stick to the norm and dress to the nines or embrace the stay-at-home fashion they have been sporting for the past year.

Here are the most and least casually dressed celebs who graced our televisions Sunday night.
Most Casual

Jason Sudeikis arguably kept it the most casual in his simple pastel tie-dye hoodie. However, this did fit his “Ted Lasso,” role, in which he plays an inexperienced soccer coach, a bit more than his preppy wardrobe in the series.

It must have brought him some luck, as he won Best Performance by an Actor in a Television Series, Musical or Comedy.

On a record-setting night, Chloé Zhao needed nothing more than her talent to speak for itself. Zhao sported a simple olive-green short-sleeve shirt and two braids.

Not only was she one of three women who broke the 6-year dry spell of no female directors nominated for a Golden Globe, but she also was the first Asian woman to win Best Director for a Motion Picture for “Nomadland.” Zhao was only the second woman ever to win this award. If she had dressed up any more, her radiance would have been too much to handle.

In the era of loungewear, it seemed fitting that Jodie Foster would wear silk pajamas to one of Hollywood’s most important nights. We might even call this sartorial choice fashion-forward in these unprecedented times.

Foster sat on the couch with her wife, Alex, who also wore pajamas, and her dog, as she accepted the Golden Globe for Best Performance by an Actress in a Supporting Role in Any Motion Picture for her role in “The Mauritanian.”

Jeff Daniels was another quarantine showstopper who gave viewers Zoom realness. He wore a Carhartt plaid shirt, which he said on Twitter fulfilled his “lifelong dream of going to an Awards Show wearing Carhartt.”

Although he did not win Best Actor in a Limited Series or TV Movie for his role in “The Comey Rule,” he did bring us the comfort of familiarity by dressing like our uncles do on family Zoom calls.

Always the one to make someone smile, Murray sported a Hawaiian shirt, transporting the audience to a sunny and laid-back place. He kept the vacation vibes going with a drink he made for himself.

Sadly, Murray did not take his cocktail on the rocks nor win Best Supporting Actor in Any Motion Picture for his performance in “On The Rocks.”

Cinderella who? Cuoco didn’t let quarantine get the best of her special night as a first-time nominee for Best Actress in a Comedy Series or Musical for her role in HBO Max’s “The Flight Attendant.”

She wore an Oscar De La Renta gown fit for a princess; she cried when she first tried it on, her stylist Brad Goreski said.

His strategy for styling Cuoco was to have her try on as many outfits as possible in 15 minutes, because while she loves fashion and wanted to have fun with her ensemble, Cuoco is also decisive and unfussy, Goreski said.

Mirroring his character Prince Charles in “The Crown,” Josh O’Connor was smashingly dapper in his suit designed by Loewe’s Jonathan Anderson.

The exaggerated white collar on his tuxedo made him look like a real-life prince ready to claim his title as Best Actor in a Drama TV series.

Even through a bad Zoom connection, there is no way viewers could have missed Cynthia Erivo’s Valentino Couture neon green dress.

Despite the heels’ height, Erivo walked gracefully on stage to present the award for Best Screenplay. Bolden said that Erivo did not know what he was going to style her in and she let him be creative.

The Golden Globe himself: Dan Levy.

Taking the theme literally, Levy wore an all-gold Valentino-designed suit. He took dressing for the occasion to a whole new level as he bid farewell to the last season of “Schitt’s Creek” with a nomination for Best Performance by an Actor in a Supporting Role in a Series, Limited Series or Motion Picture Made for Television.

Since the virtual Golden Globes enabled stars to tune in from wherever they wanted, Amanda Seyfried Zoomed from the South, where she was visiting her family.

Thus, this Oscar de la Renta spring-inspired gown was perfect for the Southern weather, Seyfried said. She wanted to wear a vibrant outfit because we are living in gloomy times.

Another benefit of Zoom attendance is that the “Mank” star was able to hold hands with her 5-month-old son, whom she dressed in a tux, while awaiting the results for Best Performance by an Actress in a Supporting Role in any Motion Picture.

Speaking of wanting to be transported to less gloomy times, Watson took us back to the early 1920s in her flapper-inspired Georges Hobeika Couture dress.

The two-piece set glistened with layers of royal blue and silver fringe as she presented an award with Sterling K. Brown.

Viewers cared a lot about Rosamund Pike’s red Molly Goddard dress that contained more layers of tulle than anyone could count. She offset the fairy princess look by pairing the dress with chunky Alexander McQueen boots.

“Wow, I bet it looks like I care a lot,” Pike said when she won Best Performance by an Actress in a Motion Picture, Musical or Comedy for her role in “I Care a Lot.”

Catherine the Great would be proud of how elegant Elle Fanning looked in her seafoam blue silk Gucci dress that so effortlessly moved with her.

Fanning was up for Best Performance by an Actress in a Televisions Series, Musical or Comedy for her role as Catherine the Great in “The Great”; however, another Catherine reigned supreme — Catherine O’Hara for “Schitt’s Creek.”