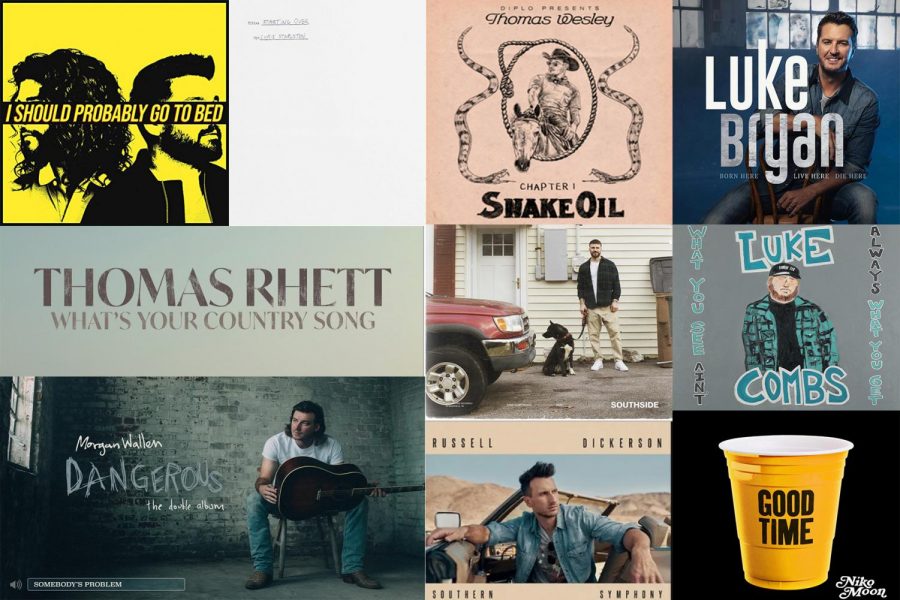 Photos gathered via Spotify and arranged by Nick Vides

From Morgan Wallen to Florida Georgia Line and Sam Hunt, this list of Country music hits released in 2020 has something for all to enjoy.

2020 has had a lot of downs, something country music thrives on, so it’s no surprise that artists have created some of their best songs this year to provide an escape from the lonely COVID blues. Here is my list of the top 10 country songs released this year.

Artist Russell Dickerson’s savvy lyrics and Florida Georgia Line’s guitars provide listeners a country rock “pump up” song. Whether you use it as a song to run to or to get the party started — in times where there is not a pandemic — there is one lyric that fits the mood of 2020: “It’s about time for a drink!”

This single hit captures a scenario that no one would wish upon anyone. Picture this: you are getting ready for a night out on the town with your friends, you’re wearing a great outfit and you’re moments from walking out the door when suddenly, your friend texts you. “Your ex is coming, too.” Your heart sinks; you should probably just turn around and go to bed. It is not worth going anymore. Get your tissues out for this tearjerker of a song.

Thomas Rhett’s new hit single asks listeners, “What is your type of country song?” Rhett touches on the cliche staples of country songs, asking the listener questions like, “Are you already country, back when country wasn’t cool?” He also tells the listeners that everybody has a small town anthem and a story to tell, but what’s yours, and can you tell it through a country song?

7: “Forever After All”  By Luke Combs — LP, “What You See Ain’t Always What You Get (Deluxe Edition)”

Luke Combs never fails to write a love song that makes you want to hold onto love like there’s no tomorrow. “Forever After All” is no exception. FM stations and blue jeans may fade over time, but Combs’ love for his lady begs him to say, “Maybe some things last forever after all.”

Yes, you could easily write this off as a non-country song, but then I’d tell you you’re wrong. Diplo, Thomas Rhett and Young Thug pushed the boundaries of what is defined as country with this party hit. It may sound too  much like Pop and R&B for some country fans, but for others, it’s a new flavor of the country genre all together.

Following his hit single “GOOD TIME,” Niko Moon continues to provide listeners with a feel-good party song about relaxing on a white-sanded beach with a cup of “Whiskey and Cola” or maybe a Pina Colada. This song, like “Dance With Me,” pushes the question that is, what is country, and how do you define it as a country song? This song provides a marriage of hip-hop and traditional country, which is a shocker to many, but boy it just works.

The title track of Luke Bryan makes listeners think of their country home. It resonates the small town effect: you’re born there, you live there and you die there. It may sound sad, but it is an anthem to small towns everywhere. “From the roots to the boots, to the lay me down suit.” So roll down those truck windows and turn it up while driving through your small town.

Morgan Wallen never fails to produce a damn good sad song, however listeners could see this as a happy or sad song depending on how you interpret the lyrics. The song is potentially about Wallen meeting a woman at a party and fails to accept how this beautiful lady could be single. He takes it upon himself to determine that the man she once dated was a fool to let her go and that “Somebody’s ‘problem’ is about to be mine.”

Chris Stapleton’s title track captures the ups and downs of a relationship or marriage and says, “It don’t matter to me. Wherever we are is where I wanna be.” What makes most of Stapleton’s songs so beautiful is that his background singer is almost always his wife, so when you hear a song, they are singing about their love for each other most of the time, and that’s a tear-jerker in itself.

The sampled old twang from the ‘50s meets Sam Hunt’s hip-hip story of a man who can’t seem to shake his ex around the small town they live in, because she’s playing “Hard to Forget.” The power chorus of this song solidifies his opinion of the ex in singing, “You’ve got a cold heart and the cold hard truth!” This song defines the year 2020, it will definitely be “Hard to Forget.”

Click here to listen to the Spotify playlist of the 10 songs listed above.

Bonus: Country Album of the Year

Hunt’s masterfully laid out album follows the real life story of his on-again-off-again relationship between himself and his now wife, Hannah Lee, to whom he finally mentions in the last song of the album “Drinkin too much.” Songs like “2016,” “Hard to Forget” and “Breaking Up Was Easy In The 90’s” cauterizes the loneliness that is the reality of a break up. From powerful heartbreaking lyrics that Hunt has actually experienced to the incredibly joyful songs about the thrills of a relationship truly defines 2020; it’s definitely had its ups and downs, just like this album’s story.