“Nana Dijo”: A look into the long lasting effects of colonialism 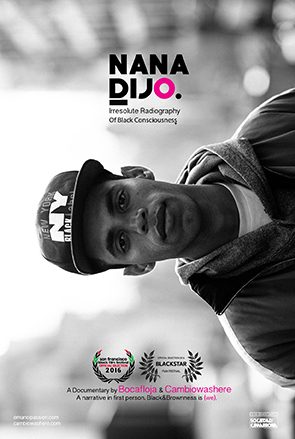 Shot in black and white, "Nana Dijo: Irresolute Radiography of Black Consciousness" provides an in-depth look into the lasting effects of colonialism on the Black diaspora of Latin America.

Santa Rosa Junior College and Our House Intercultural Center hosted a film screening and Q&A session Oct. 21 with Bronx-based rapper Bocafloja about his documentary “Nana Dijo: Irresolute Radiography of Black Consciousness,” a film that addresses the concept of Latinidad and the erasure of Afro-Latinx and Indigenous people.

Shot in black and white, the film provides an in-depth look into the lasting effects of colonialism on the Black diaspora of Latin America. Personal, in-depth interviews with Afro-Latinx people from Argentina, Uruguay, Mexico, Honduras and the U.S. allow the viewer to see a first-hand account of the racial transgressions that have long plagued the Afro-Latinx community. The film unveils the concept of Latinidad or mestizaje that has, in many ways, created the erasure of the Afro-Latinx and Indigenous people.

For a long time, Latinos have grappled with the notion of mestizaje, the idea that they are one cohesive group of different races, descended from a colonial past. This notion has perpetuated many of the problems that Bocafloja’s film addresses, the direct erasure of the Afro-Latinx experience.

“By developing this whole ideology behind mestizaje, it creates a false notion of belonging, of acceptance, of equality, in the context of a deeply unequal society, that at the end of the day is still administered in terms of resources, knowledge, by a white ruling class…or Latin American white ruling class, in positions of power,” Bocafloja said.

One of the most interesting aspects of the film is that it doesn’t show where the interview subjects are in Latin America, but they all share the same perspective: the breaking down of the notion of mestizaje.

“It was totally intentional. One of the most problematic aspects of Latinidad is that it creates this false sense of solidarity between Latin American nations and in a way it creates a false perception of certain dynamics, and it erases certain experiences,” Bocafloja said.

The film screening also allowed attendees to gain insight into Bocafloja’s background. Born of Afro-Indigenous descent, Bocafloja grew up in Mexico City and later immigrated to the Bronx. The different racial dynamics at play between the two countries became a key factor in his personal experiences as a racialized man in a world still permeated by its colonial past.

“The way that I identify myself, it’s constantly moving… because each location has a different lecture on your body,” Bocafloja said. The way he would be perceived in Mexico City, for example, would not be the same as he would in the United States.

Self-described as a person of the global south, much of his artistic work focuses on critiques of capitalism, imperialism and colonialism. On what compelled him to make a film focusing on an aspect of colonialism, Bocafloja said, “It is part of the political responsibility that I assume as an artist, but more important than anything, it’s the way that I can utilize my own experiences as a human, as an artist, to socialize certain forms of knowledge and create and participate politically through my own experience. ‘Nana Dijo’ happens to be a very personal film because I’ve dealt with the impact of colonialism and race politics and everything that comes with it because of my own subjectivity.”

Bocafloja’s personal experiences highlight the struggles that marginalized communities home and abroad share, and more importantly highlight in a time of desperate political and social change.