“Final Fantasy VII Remake”: A reinvention, not a rehash 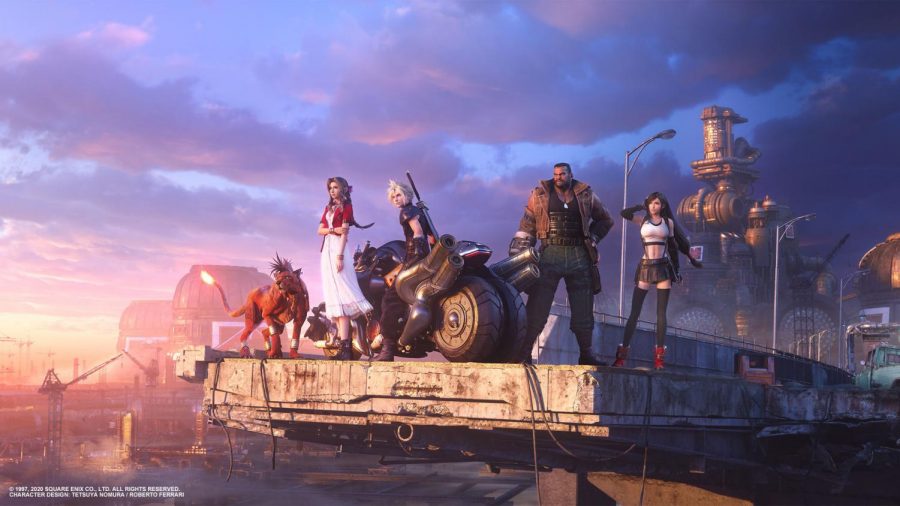 “Final Fantasy VII Remake” is an ambitious and stylish piece of video-game art that, while occasionally tedious, is well worth more than five years of waiting.

Publisher Square Enix, which released “FF7 Remake” on April 10, was relatively silent on the project between the game’s announcement in 2015 and the first gameplay showcase in 2019, but the last two months have seen the release of a playable demo and a national marketing campaign for the game.

The engrossing, fan-favorite story, which mostly sticks to the script to the 1997 original, follows Cloud, a mercenary in the city of Midgar, in his fight against evil corporation-government hybrid Shinra.

Cloud is aided by Avalanche, a radical environmentalist group that seeks to destroy Shinra by bombing the company’s reactors, which generate energy for Midgar at the cost of the health of the planet.

Cloud is joined by Avalanche’s brash leader Barret, childhood friend Tifa and flower girl Aerith. Red XIII, a talking beast, joins the party towards the end of the story, but isn’t playable.

The story is not a simple rehash of “Final Fantasy VII.” Instead, we see instances of the plot diverging and evolving; a new mysterious enemy sometimes appears to intervene and ensure the plot stays on the course established by the 1997 original.

The game combines strategy and adventure elements with action-RPG gameplay. Large swathes of the campaign are dedicated to puzzles and minigames including motorbike combat, darts, squats and pull-ups.

Transitions between intuitive combat and minigame diversions are smooth, as are the shifts between gameplay and cutscene. Menus and interactions sport a smooth and responsive user interface. All of this works to serve the game’s immense and immersive story.

Midgar is an industrial hellzone of a city that has lived in the minds of fans since 1997, and with “FF7 Remake,” Square Enix delivered a deeply detailed rendition that brings Midgar to life like no piece of “Final Fantasy VII” media prior. The sprawling, dynamic environments of the city show a new, lighter side of Midgar while still showing the dismal conditions of lower-class Midgar slum residents.

Passing non-playable characters lets the player hear their overlapping conversations, and an unparalleled sense of scale makes the imposing size of Midgar more apparent than ever. The thousands of footsteps you take across Midgar each ring a slightly different tune.

With the music of “Final Fantasy VII” regarded as one of gaming’s top soundtracks, “Remake” lives up to expectations through adaptation by reorchestrating old songs and incorporating their motifs into new tracks as well.

By playing through the game, the player can also acquire 31 music discs that feature remixes of “Final Fantasy VII” tracks, usually in a jazzy style.

The often repetitive gameplay, however, holds “FF7 Remake” back from reaching the heights of the 1997 original.

Presumably, the series’ next entries will feel less redundant, as their plots do not need any added filler and cover much larger areas than just Midgar.

“FF7 Remake” features some annoying moments and the occasional minor glitch, but it effectively pulls you into its world with excellent world-building, intelligent storytelling and challenging gameplay.

“Final Fantasy VII Remake,” like Peter Jackson’s “The Lord of the Rings: The Fellowship of the Ring,” is the infrequently monotonous first entry of what is sure to be one of gaming’s great series.