Board games to beat boredom; Five not-digital games to entertain during shelter-in-place 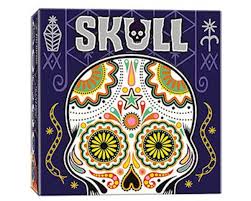 Skull is one of five board games recommended to beat the boredom under Sonoma County's shelter-in-place order dictating social distancing.

Everyone is stuck indoors until this pandemic blows over. If you’re bored of Netflix and video games, there is another option to occupy your time: board games.

An American staple since long before video games, board games have expanded to a number of themes and types, from deep 4x strategy in Twilight Imperium and the real estate game Monopoly to running your own vineyard in Viticulture or even a first-person shooter scenario translated into board game format. There is a game for every interest.

If no one in your household wants to play board games with you, or you’re living alone, there are online places to play games, too.

Steam has a number of board games converted into a digital format with popular games such as Lords of Waterdeep and Splendor online and in mobile app stores. One of the bigger platforms is a tabletop simulator that offers the look and feel of playing a board game on a fancy table, along with ways to make it VR capable so you can feel like you’re in a room full of people.

Recommended games (some can be played online):

A spin-off of Century Series, Golem Century is a game for up to five players where you play as a Golem-maker, trying to trade or make soul gems to power different kinds of Golems. There are four types of soul gems ranging from white to pink, white being the most common and pink being the rarest. You’re given one action each turn, where you can take a card, play a card or make a Golem (which scores Victory points, or VP).

It’s a mad rush to collect valuable cards that will give you the gems needed to make the Golems, especially since the last two Golems of the row give you special Victory tokens.

Skull is a three-to-six player, Mexican-styled poker game in which each player gets four tiles — three are beautiful flowers and the one is a skull. Players make bets on how many flowers they can turn up without turning over a skull before placing their tile facedown. The challenge is that it’s easy to lose all of one’s flower tiles, but it’s also easy to win as you only have to bet correctly twice.

The players try to bluff the other players to force higher and less likely bets as your stack of flowers to try and complete the bet yourself.

Splendor is a four-player game in which the players are aspiring Renaissance jewelers trying to prove their worth as craftsmen to different “patrons” and gain the ownership of various mines and trade routes.

The game ends when someone has a total of 14 points or higher, or whoever has the highest number of points after one last round wins.

Lords of Waterdeep is a two-to-six player game based on the popular tabletop role playing game (RPG)  Dungeons & Dragons. It’s a worker-placement game where you’re playing as the various masks, Lords of Waterdeep. As “mask lords,” players have different quests to complete as they go out and use their agents to hire “adventurers” to complete these tasks.

Players can choose to accept quests that offer advantages, and they can also force their opponents to take on undesirable quests. The game is scored with points; the player with the most points at the end of the game wins.

It is recommended that this game be played with the expansion sets Skull Harbor and Undermountain, as they allow up to six players and offer more variety, such as dealing with corruption and making the availability of influence cards more plentiful.

Settlers of Catan is a two-to-five player game in which players settle the new lands of Catan. They take turns rolling a pair of dice to generate resources, which players turn into new roads, outposts and soldiers that will defend the player’s resources. Players should be on good enough footing with their neighbors to trade for resources while also being cunning enough to build Victory Points without other players getting in the way.

The winner is the first player to earn 10 Victory Points, which are won based on a player’s successful settlement, road construction or army-building.