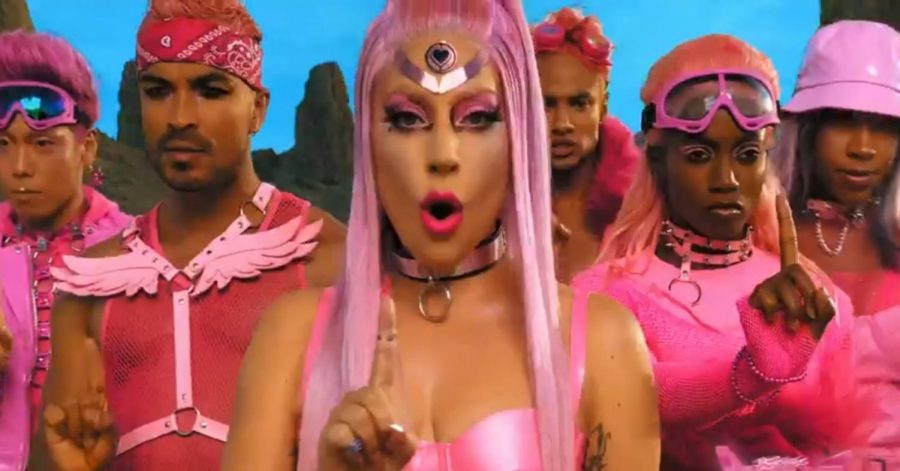 Courtesy of Interscope Records and Vevo

Although Lady Gaga's new single "Stupid Love" is one worthy of singing along, the video does not do her new track justice.

Lady Gaga’s new single, “Stupid Love,” graces Gaga fans with the artistic, out-of-this-world sounds and fashion on which the star has built her career, but breaks away from the country- and jazz-influenced style of her recent works.

The song is the first single from Lady Gaga’s sixth solo album set to release this year, currently known as “LG6.”

Gaga received widespread acclaim, and a larger audience share, for her genre-shifting, country-inspired music from her 2016 album “Joanne” and her Oscar-nominated performance in the 2017 film “A Star is Born.”

In the music video for “Stupid Love,” Gaga plays with a galactic sound via synth-pop-inspired beats and eye-piercing neon outfits, despite clearly working with some limitations.

The song and video are upbeat and joyful, quite the opposite of the dramatic and orchestral teasers.

In a twist inspired by Donna Summers’ “I Feel Love,” the track’s synths echo throughout the song, reminiscent of Gaga’s beginnings on her first album, “The Fame.” This return to her roots is something fans have looked forward to since her last pop album, “ARTPOP,” in 2013.

The track finds Lady Gaga singing about a new lover from whom she only wants one thing: their “Stupid Love.” She keeps it simple with straightforward verses and no flashy vocal ranges.

However, the music video is a questionable choice for her new music. Besides her wearing extravagant costumes and performing creative dance numbers, the video is rather static.

Although the otherworldly costumes and scenery are there, Gaga looks as if she limited her artistic potential. This could be related to her partnership with Apple for the iPhone 11 Pro.

The video, shot on the iPhone for Apple’s #shotoniphone ad campaign, makes for a low-budget look since the production quality was limited to a cell phone. There’s little-to-no change of scenery or dynamic backgrounds, nor the attention-commanding video Gaga is known for.

Despite the video quality, the song still manages to uplift listeners’ moods and inspire them to get up and dance.

Lady Gaga returns to her pop roots while she brings something listeners have not heard from her before.

As much as Lady Gaga was loved by the masses for her country journey, “Stupid Love” reminds fans of why they first fell in love with Gaga when she released “The Fame” in 2008.