The Oscars: More than an awards show 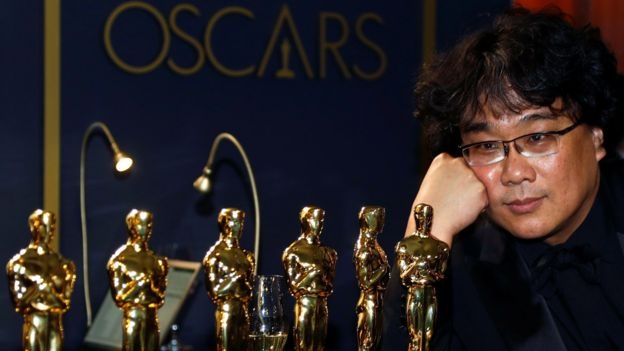 When I think of my childhood, one thing that comes to mind is the Oscars.

Growing up, I would watch them while crammed on the couch with my mom. She loves movies. When I was younger, the famous actors and their pretty dresses fascinated me. As I got older, I began to recognize some of the nominated films.

This year, I knew which films I was rooting for and I was excited for fiery political and environmental speeches.

The show opened with musician Janelle Monae doing her rendition of the Mr. Rogers song, “A Beautiful Day in the Neighborhood.” Monae then broke into a vibrant pop piece that showcased various nominated films like “Little Women” and “Joker”.

Monae, a queer African American woman, put on a showstopping performance with her own individual spin. She also brought awareness to the women who made some of these films possible.

She was joined by Billy Porter, a gay African American actor and performer. Porter is known to blur the lines between masculinity and femininity in fashion. This duo started off the Oscars with a bang.

“I don’t know Chris, I thought there was something missing from the list this year,” Martin replied. They paused before Rock answered “vaginas?” and both nodded in agreement.

This joke touched on a common problem in the entertainment industry: the lack of female representation. This has been an issue for the entire 92 year history of the Academy Awards, and I’m shocked and appalled that the issue persists.

On the same topic of gender, Hildur Guðnadóttir, composer of “Joker,” won Best Original Score. Guðnadóttir is the fourth woman to win in that category and the first woman to win as a solo act. She ended her speech with an inspirational call to women.

“To the girls, to the women, to the mothers, to the daughters, who hear the music bubbling within, please speak up,” she said. “We need to hear your voices.”

“I dedicate this to all of the indigenous kids around the world who want to do art and write stories. We are the original storytellers and we can make it here as well,” Waititi said.

Later, he also paid tribute to the tribal lands that the Oscars were held on, a first in Oscar history.

“The Academy would like to acknowledge that tonight we have gathered on ancestral lands of the Tongva, the Tataviam and the Chumash,” he said. “We acknowledge them as the first peoples of this land on which the motion pictures community lives and works.”

This mention of native tribes was groundbreaking and gave worldwide tribes credit for the land stolen from them by European and American imperialism.

When I saw that Joaquin Phoenix won an award, I knew he would have a great speech. His explosive acceptance speech at the BAFTAs that called out systemic racism in the film industry. At the Emmy’s he dropped multiple F-bombs.

After he was announced as this year’s Best Actor, he thanked the Academy and the cast and crew of “Joker.”

And then he got down to business.

As if that didn’t already have the audience in tears, he ended his speech with a quote from his brother, River Phoenix.

Phoenix, 23, died of an overdose just eight years into his acting career.

“Run to the rescue with love, and peace will follow,” he said.

Finally, I can’t write an opinion piece about the Oscars without mentioning the sweeping success of the film “Parasite.”

Many expected “Parasite” to win Best International Feature Film. By the end of the night, it had won that award in addition to Best Original Screenplay, Best Director and Best Picture.

I was overjoyed at the film’s success. Asian representation is hard to come by in America and, historically, even harder to come by in Hollywood. Bong Joon-ho’s Best Director and Best Picture wins were proud moments for me as an Asian American. The fact that he beat Quentin Tarantino and Martin Scorsese, two of America’s most famous directors, is just the cherry on top.