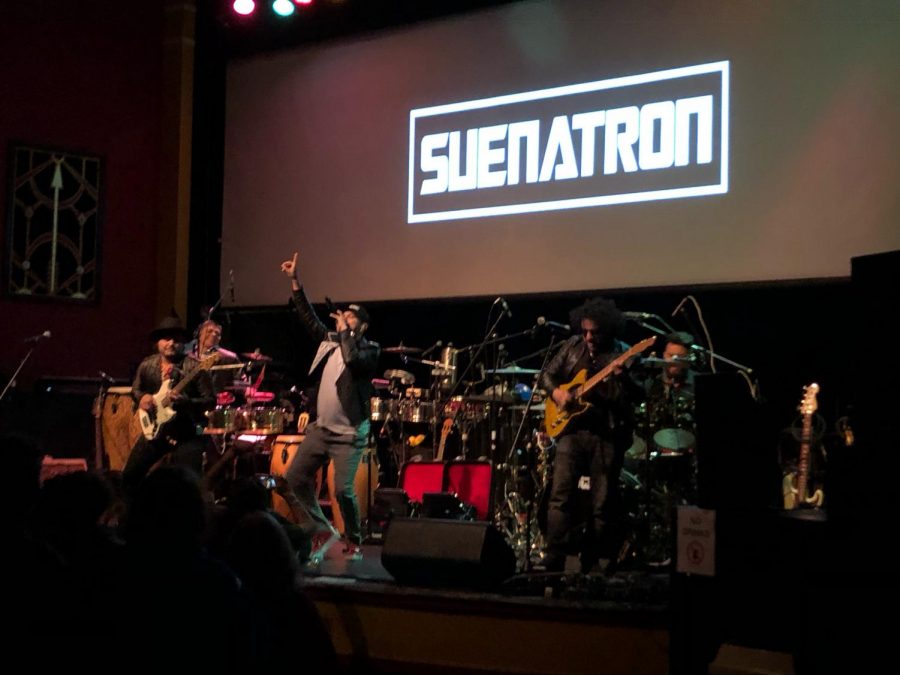 SuenaTron hypes an excitable crowd at the Mystic Theater in Petaluma, California. The band is currently working on its first album and has not yet set a release date.

“If you have a drink in your hand, I want you to raise it now. Salud!” SuenaTron’s lead singer and accordion player Mexia Hernandez shouted to the crowd. He towered above them raising a glass in his hand.

SuenaTron hyped the crowd with high energy performance in their self-proclaimed style, “musica de fusion,” a balance of traditional Spanish songs along with complex rhythms and influences of pop, Cumbia, Norteño and rap. They were on stage at The Mystic to open for the nationally renowned latin band Ozomatli.

Hernandez, 36, noted that at SuenTron’s conception 10 years ago, the band was more traditional and felt pressure to conform to the reputation of his father Hernan Hernandez, a band member of the legendary latin band Los Tigres del Norte, widely considered “the Mexican Beatles.”

Hernandez, along with drummer brother Giovanni Hernandez and two guitarists Matao Gonzalez and Eduardo Montelogo feel that while it was helpful to have the backing of Los Tigres del Norte, it made it harder for the band to experiment with their music.

“Me and my brother [Giovanni] very much want to do things on our own,” Mexia Hernandez said.

Drummer Giovanni Hernandez, self-taught since the age of 11, sees his dad as a mentor. He used to play a lot of his father’s music when he was learning and notes that his father is a humble presence.

According to it the Hernandez brothers, it was their father who wanted them to find their own unique sound in the first place.

“He was there with us when we were recording the album. He guides us,” Giovanni Hernandez said.

“He loves it. He calls me, ‘Hey how is everything going?’ He’s very hands-on,” Bravo said.

After brother and band member Raul Hernandez quit SuenaTron to start a family a year and a half ago, the band has been dead set on honing their sound. Gonzalez noted that since then, the band feels it has gotten to a good place.

“The idea was always to get to where we are now,” Gonzalez said.

That brisk December night, SuenaTron’s blend of both traditional and modern approaches to latin music delighted its Petaluma audience. The band’s newest single, “Compas,” electrified the crowd as Mexia Hernandez sang with conviction and the band felt in tune with one another.

The band members feel the Sonoma County area is a happening place to perform.

SuenaTron has six singles out currently and eight songs in total. Their album, which still needs a name, will be released sometime in February.