JPEGMAFIA brings “All My Heroes Are Cornballs” to Oakland 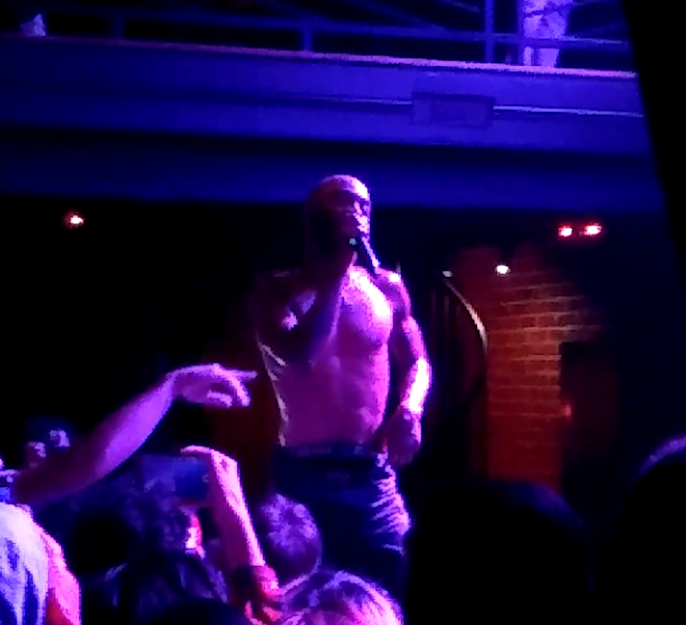 JPEGMAFIA promotes the release of his newest album "All My Heroes Are Cornballs" with an electrifying performance at The New Parish in Oakland.

It goes without saying that the world of live shows, especially among contemporary rap artists, has become all too lifeless and overrated, with artists just lip-syncing over the instrumentals and vocals on their records. However, Baltimore’s experimental artist JPEGMAFIA’s performances prove rappers can still deliver an electrifying and authentic concert experience.

Peggy recently came through The New Parish in Oakland as part of his new tour the JPEFMAFIA TYPE TOUR, which is bringing his unique sound to over 18 cities across the United States in promotion of his latest album, “All My Heroes Are Cornballs.”

Known for his abrasive and experimental sound, his latest album continues to push the boundaries of alternative and rap. Tracks like “Jesus, Forgive Me I Am A Thot” and “Grimy Waifu” is chalk-full of Peggy’s simplistic and political lyricism and nuanced production which has as many melodic and soulful lows as it does abrasive highs.

Everything during the concert felt authentic and made me feel like I was having a one-of-a-kind experience.

Although Peggy could’ve easily sold out a large-scale venue like the Fox Theatre down the street, the 400-person capacity venue he chose gave a more intimate feeling to the performance and brought the audience up close to the artist.

While other rappers are prone to nonchalantly rap over their normal song, Peggy had nothing in the background, and rather than giving his nasally, more-reserved delivery on some of his songs, he screamed each word at the top of his lungs, perfectly matching the hyped energy of the audience.

This energy was reflected perfectly in the performance of the opening track “Jesus Forgive Me, I Am A Thot.” The melodic and spacey instrumental was contrasted by Peggy, who ran around on stage, contorting as he delivered his bars.

The performances of his more well-known songs got the crowd even more hyped. Songs like “Real Nega”, with its sporadic shouting sample of ODB and tribal drum beats, lent themselves perfectly to the lively and buoyant energy of the crowd; while others like “Thug Tears” and “Puff Daddy” were songs the whole audience chanted along with.

However, he also threw other, lesser-known fan favorites, like “Does This Ski Mask Make Me Look Fat?” into the mix, when he brought out underground Baltimore rapper Heno in an amazing display of chemistry, with each rapper trading bars over a dreary beat that transformed over time.

JPEGMAFIA’s love for his fans was also clear throughout the performance. While other artists act like celebrities who are above their fans, Peggy made an effort to interact with the crowd, whether by jumping off stage and crowd surfing while he was rapping, or by opening up the moshpit to jump in and be with his supporters.

The show ended with a performance of the slow-burning banger “Rainbow Six.” As the eerie, moaning sample started the song and built up to the euphoric climax in the chorus, Peggy delivered some of his most hardcore and cut-throat lyrics while shaking hands with fans in the front row.

Afterward, Peggy even offered to come meet with fans by the merchandise table after the show so they could hang out and talk if they wanted to—an experience fans usually pay for when they want to meet an artist.

However, admittedly no concert is perfect.

For those expecting to enjoy the songs of the new record, they might walk away disappointed. Although his new record had over 18 new songs only about five or six made their way into the tracklist. Moreover, this raises another problem. Although JPEGMAFIA has hours worth of music to choose from, his setlist clocked in at a little over an hour.

The sound system at the venue was also left a lot to be desired as well. The overblown and abrasive sound of Peggy’s production really couldn’t be supported by what the speakers could pull off, leaving a lot of unnecessary treble and bass that drowned some of his vocals.

All things considered, though, JPEGMAFIA came through with a stellar live performance, which provided the audience with a genuine concert experience that’s rarely paralleled by other artists in the musical landscape today.