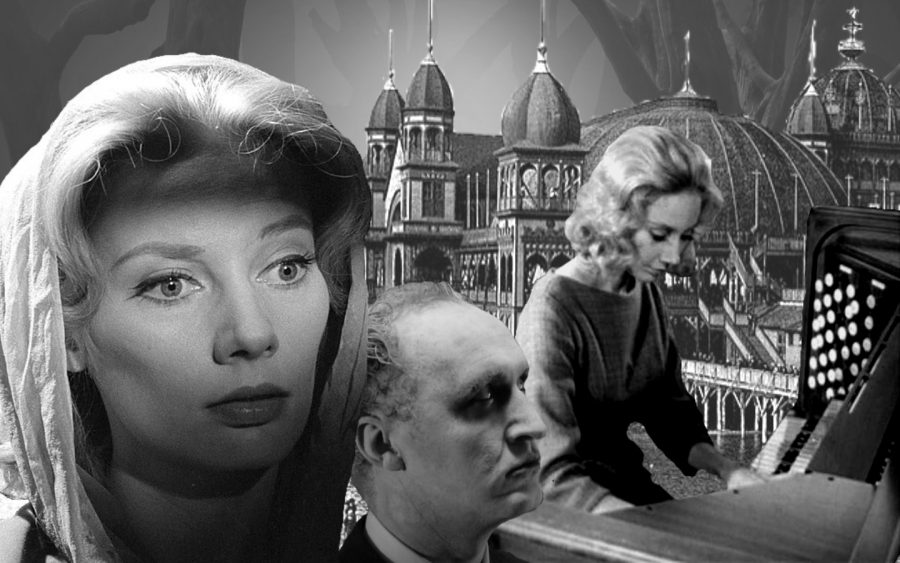 Despite its amateur elements, "Carnival of Souls" is a horror classic due to its focus on the independence of women and its haunting atmosphere created by cinematography, editing and an ethereal organ score by Gene Moore.

A car filled with teenage boys rolls up to a car full of teenage girls at a stoplight. The boys suggest a drag race, and the girls agree. As they muscle for position on a rickety drawbridge, the girls’ car is forced to pull sharply to the right, sending them flying into a river.

The opening two minutes of “Carnival of Souls” are abrupt and disorienting.

Despite being an American film, “Carnival of Souls” is disinterested in pandering to Americans, proudly displaying its arthouse influence and criticizing the country’s blind faith in organized religion and perverted male behavior, while normalizing things like therapy, mental illness and the independence of women.

The film was released Sept. 26, 1962 with a budget of about $33,000, or $280,000 in today’s currency. The acting is amateurish and the effects are cheap even by today’s standards, but the atmosphere the film creates hasn’t aged at all.

While the film flopped at its release in 1962, “Carnival of Souls” began to receive acclaim in the 1980s for its haunting organ score by Gene Moore, simple-but-effective cinematography, innovative low-budget scares and an animated performance from amateur actress Candace Hilligoss as Mary Henry after it was screened at arthouses and on late-night television.

The film’s “carnival” is the Saltair pavilion, originally built as an amusement park/resort in the late 19th century. Saltair burned down two times before the film, and burned down twice after the film was made. Reminiscent of a wooden Taj Mahal and far enough away from the main road to give off a mysterious allure, it’s easy to see why director Herk Harvey was so interested when he first saw the pavilion while driving through Utah.

After a cleverly designed opening-credits sequence, Mary, one of the girls involved in the film’s opening accident, shocks both emergency responders and townspeople by walking out of the river somehow unscathed.

Mary is an organist, further tying the instrument to the film. While most would tie the organ to religion, specifically Christianity, Mary treats her position as nothing more than a job. “To me, a church is nothing but a place of business,” she says later in the film.

In a night-time driving scene, a profile shot of Mary establishes her reflection in the passenger window. The film cuts away to an image of Saltair, a point of obsession for Mary, and when the film cuts back, the organ strikes a hideous chord.

Her reflection in the window is replaced with the visage of a grim figure known only as “The Man.”

Played by one-time feature film director Herk Harvey, The Man reappears many times throughout the film, and each time is a genuine fright. No one else sees him or believes Mary when she tries to explain his appearances. Many have hypothesized that The Man represents death, chasing Mary as she tries to run from the consequences of the film’s opening car accident.

After swerving off the road in fright, Mary makes her way to an inn.

We are then introduced to John Linden, who waits outside her room knowing she’s expecting the innkeeper to bring coffee upstairs. When Mary opens the door, covered only by a towel, she is shocked to see a man. Instead of politely backing off, John forces his way into the room to flirt with her.

When she finally kicks him out to get dressed, a sleazy organ riff accompanies John’s efforts to peak into the room. We see him gaze directly at her as she shimmies out of her nightdress, followed by a close-up shot of his half-closed, wandering eye.

John is a sleazeball and the film treats him as such. In many classic Hollywood films, men act like animals and the films excuse it, but independent films like “Carnival of Souls” have more liberty to portray toxic masculinity as the damaging force that it is.

After their first encounter, Mary decides to willingly spend time with John as he belittles and objectifies her, due to her fear of being alone and her struggle with depression. Before the general public acknowledged women’s struggles and mental health issues, B-movies like “Carnival of Souls” did.

Instead of outright rebuking him, a tactic she found nearly ineffective, Mary uses her wit to gain the upper-hand in their discussions.

Mary goes shopping later that day and emerges from a dressing room to find the world silent. No one seems to see or hear her. Critics praised this atmospheric, dream-like sequence. She exits the shopping center accompanied by Moore’s creepy organ score—the only audible sound. Birds cooing are the first sound she hears as the world returns to normal.

Mary bumps into a doctor, who offers to speak with her in his office across the street. “It was as though, for a time, I didn’t exist, as though I had no place in the world, no part in the life around me,” she tells him. “You think I’m insane.”

“I have no desire for the close company of other people,” Mary says, explaining why she doesn’t have a boyfriend and never wants one. The film puts an emphasis on women’s independence that most films of the time wouldn’t dare to, while destigmatizing voluntary therapy.

Mary’s decision to visit Saltair alone leads to one of the film’s best sequences. She explores the dancehall, the abandoned circus and the wide-open empty grounds of the pavilion. The especially freaky score in this scene sounds like a distorted circus calliope played on a 100-year-old record player.

When John persistently asks Mary for a date after her work, she initially rejects him, but reconsiders when he tells her, “maybe you’ll need company tonight, it’s better than walking home alone.” She agrees.

Mary enters a trance-like state while playing organ at the church and pivots from playing church standards to playing something much more sinister and sacrilegious. She isn’t in control of her actions at all, and has visions of Saltair and The Man rising from underwater to stalk her.

As the music she plays builds in intensity and climaxes, The Man’s hands enter the frame and crash down onto hers, striking a final, horrifying chord.

“Carnival of Souls” is a film so progressive and creative it could have been released this year. The amateur aspects of the film occasionally distract, but never challenge the aesthetic; each scene feels like a deeper level of a dream that Mary, and the audience, cannot awaken from.

Gene Moore’s organ score is dynamic and arresting, and the film gets better with repeat viewings.

For every hundred Hollywood films depicting women negatively, possibly 10 films honestly assess the damaging effects of patriarchy without sacrificing artistic value. Of those 10, perhaps one not only adds a feminist perspective but is wholly shaped and improved by it. In the field of atmospheric, psychological horror from the mid-20th century, “Carnival of Souls” is that film.