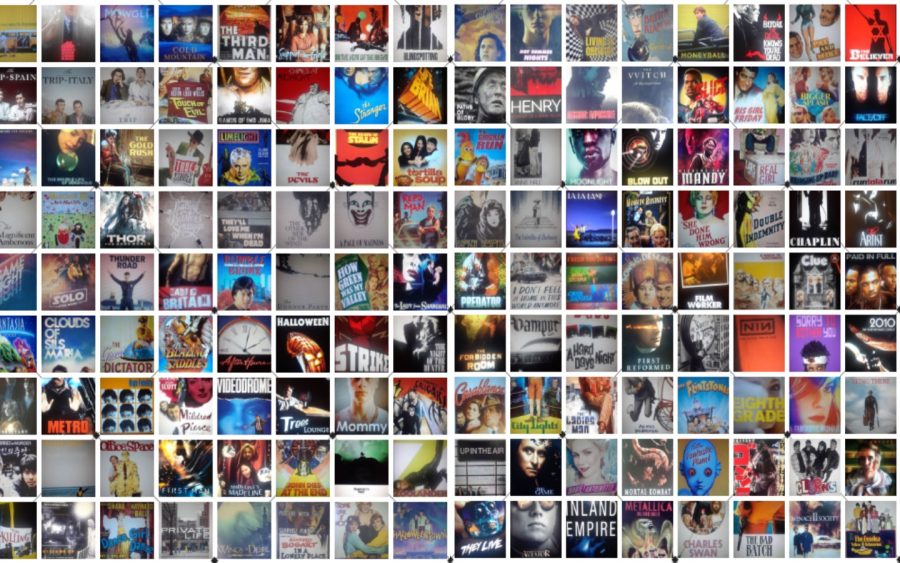 If those numbers sound ridiculous, it’s because they are.

Even nine months after the project’s end, I still feel the consequences of my torrid pace. It took me three weeks to watch a single film in January, and even in September, I find it difficult to watch a film more than once or twice a week.

The project began on Jan. 1 with “Reservoir Dogs” and ended on Dec. 31 with “12 Angry Men.” The shortest film was “5 Centimeters Per Second,” at 65 minutes, and the longest was “Seven Samurai,” at 207 minutes. “Black Dynamite” made me laugh the most and “Lucky” made me cry the most.

I watched eight films each by Lars Von Trier and Orson Welles, and the film I watched the most was “Phantom Thread,” a new favorite of mine, which I watched four times.

Over the year, I also watched 42 movies I’d already seen before. This sounds counter-productive, but it’s normal to watch movies with friends, revisit newly contextualized films or just watch an old favorite; however, it’s an added stressor when you’re watching 365 additional films. With an additional 28 viewings of those 407 films, I watched a movie from beginning to end a total of 436 times in 2018. This isn’t counting the dozens of films I started but didn’t finish.

There are two huge drawbacks to watching over 400 movies in a year, one avoidable and one not.

The first drawback is money. When you add up the 100-or-so films I rented, plus the cost of subscription services and movie theater tickets, I spent almost $1,000. That’s not even counting what I spent on transportation and refreshments.

I could have avoided this deficit-size spending had I better utilized public domain films, which are available on YouTube, the Internet Archive and even Wikipedia. While I’d still have paid for a few subscription services and movie tickets, I’d have spent a fraction of that $1,000.

The second drawback is time. Unfortunately, in a project like this, there’s no way to avoid spending enormous amounts of time watching movies. Even by only watching the 60–70 minute films that barely qualify as feature-length, the commitment to watching one film per day takes its toll. Instead of watching them at my own pace, I was a slave to the daily grind.

If I missed a day or couldn’t stick to the schedule, I doubled-up on another day. The furthest I got behind was two days, which meant I watched three films in one day to catch up. This happened several times.

I can now confidently speak at length on the history of film and film production, and I am a much stronger critic. I’ve even pivoted to watching mostly older, public domain films this year. While I learned a lot last year with the 365 films and the five film classes I took, I find it hard now to watch newer films, probably due to overexposure.

Overall, I think the project was a success. I could’ve managed money a lot better, but I wouldn’t take back the time and money I spent. I still believe I could have made the project more successful by taking a bit more care.

If done right, this project can serve as a substitute or supplement for film school; if done wrong, it can permanently mess up the way you watch movies. When you do it like I did, both can be true.