“Norman F*cking Rockwell”: Doesn’t rock but it does all right 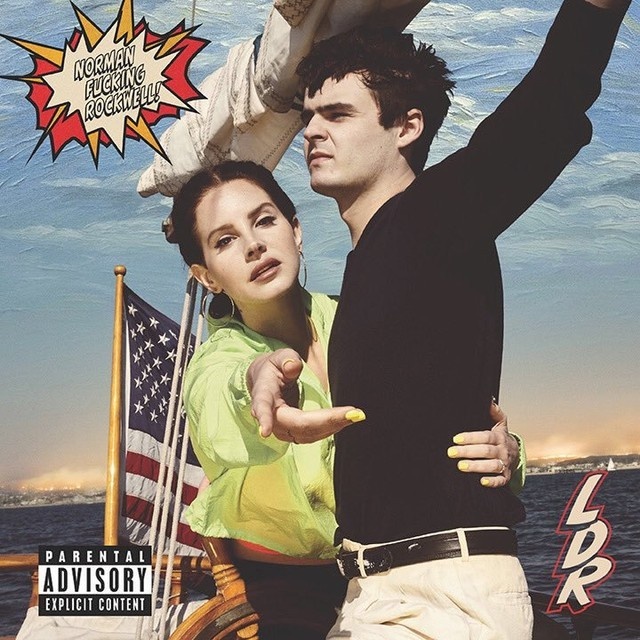 Lana del Ray and Duke Nicholson on the cover of "Norman F*cking Rockwell."

Lana Del Rey’s sixth studio album is a broken record. She fails to deliver any new sounds that differ from her previous albums. By sticking with piano ballads and her electronic pop style, Del Ray doesn’t kick it up a notch or try something new.

Throughout the album is a theme of lost love. She references an ex-lover in “Venice Bitch” when she sings, “Oh my God, miss you on my lips. It’s me, your little Venice bitch.” The song starts off with acoustic guitar playing softly in the background. The middle of the song turns psychedelic as the sounds of a scraping electric guitar echo loudly.

“California” is a piano love ballad accompanied by violin and a strong, pulse-like drum beat. In the song, Del Rey references a long lost lover who she yearns for. “If you come back to America, just hit me up. ‘Cause this is crazy love, I’ll catch you on the flipside.”

Norman Rockwell, the album’s namesake, was an American illustrator, painter and writer who is famous for paintings such as “Rosie the Riveter.” Rockwell’s work is a representation of nostalgia for bygone American glory days. Del Rey is also known for using themes of Americana in her music.

Del Rey gets political in “The Greatest” when she references Kanye West and sings “Kanye West is blond and gone. ‘Life on Mars’ ain’t just a song.” The New York Times mentioned that they met each other when she played at West’s wedding. Their relationship broke when Del Rey commented on selfie West took wearing a MAGA hat, reprimanding him for his support of President Trump.

According to Vanity Fair, Del Ray said, “Trump becoming our president was a loss for our country, but your support of him is a loss for the culture. I can only assume you relate to his personality on some level. Delusions of grandeur, extreme issues with narcissism.”