World of Warcraft Classic: Does it stand the test of time? 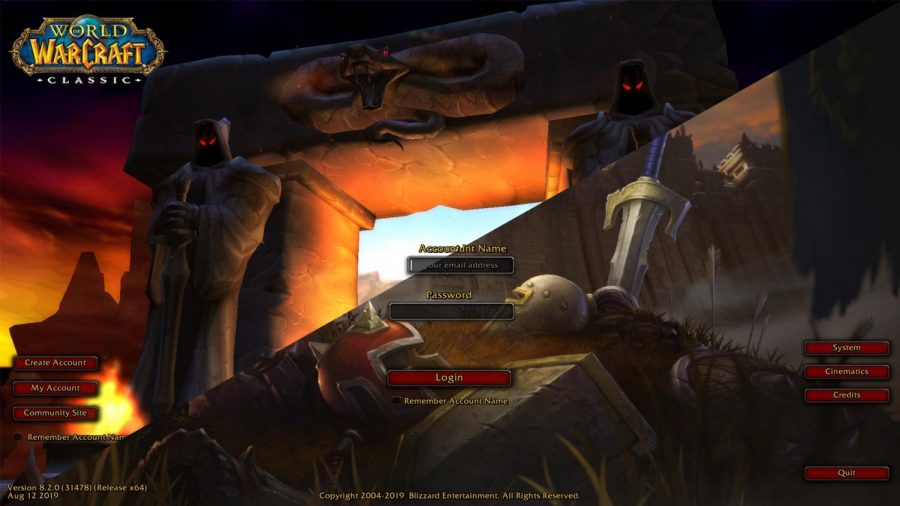 Each expansion World Of Warcraft creates a unique login screen, over the years we've seen many designs but the structure has remained unchanged.

Picture this, if you can stomach it. It’s November 2004, Usher’s “Yeah!” blares from the speakers of your Toyota Camry, memes are in their primordial state, “all your base are belong to us” comes to mind. “Friends” is going off the air and “Lost” is premiering. From a dorm room, Mark Zuckerburg launches Facebook, and in a boardroom in Irvine, California, gaming giant Blizzard releases “World of Warcraft” (WoW).

Like all other media as of late, the cycle is starting anew. The drums of war beat again; WoW launches for a second time Aug. 27.

“World of Warcraft Classic” is a new stand-alone version of the acclaimed massively multiplayer online roleplaying game (MMORPG) created from the ground up to be an almost perfect recreation of the game as it was in 2004 — or more specifically, as it was in version 1.12.2, the final patch of the original game, which launched in 2006. This classic server has been a highly requested option almost since the game’s first expansion in 2007.

Over the years, MMORPGs of all kinds have attempted to remain relevant by employing two methods: patches and expansion packs. Patches update individual features and add smaller portions of content such as dungeons and raids. Expansion packs are large scale content updates that cost the full price of a new game and, in the case of WoW, increase the maximum level of characters, add new zones for leveling and questing and often add a new playable race or class. Expansions like these bring fundamental changes to the way the game is played, changes that some players feel take away their original reason for playing.

In 2019, WoW is on its seventh expansion, “Battle for Azeroth,” and the game is nearly unrecognizable from its original state. This, combined with the less than favorable reception the expansion’s content received, has meant more demand than ever for “WoW Classic” as an alternative.

So what was so special about this 15-year-old game? Or do we all just have a bad case of nostalgia goggles?

2004 was a very different time. The internet was still relatively new, and MMORPGs were mostly small in scale; WoW was unlike anything gamers had seen before. It was a world that was seemingly boundless and full of challenges that were unheard of at the time.

“The way we went about [developing the game] was interesting and very naïve because we didn’t know what we were really making then,” said Jeff Kaplan, an original game developer, in a recent video produced by Blizzard Entertainment.

WoW wasn’t a game designed for profit or to impress shareholders; it wasn’t created to meet a quota. It was created out of passion, out of a love for the work and a real need to create a world that players could call home.

Nearly every WoW player remembers searching for Makrik’s wife. Whether you joined after the days of quest markers and heirlooms or not, at some point you ventured into the Barrens and heard that iconic soundtrack swell — likely as you were torn apart after managing to aggravate four lions all sleeping in the same bush.

Even if you joined after the Random Dungeon Finder tool, you can’t forget your first time in Wailing Caverns, wondering if it was ever going to end, and if the druids were ever going to stop casting slumber on the healer.

You remember your first terrifying steps in Duskwood. Your first triumphant kill of a raid boss. Your first PvP encounter and, much later, the first time you felt fury, not fear, when fighting back against the foul Alliance or terrifying Horde.

WoW is full of cathartic moments that every player wants to experience once again.

And it’s these moments that have faded from the game, moments that we players want to recapture. But can we, now that we have WoW Classic?

I doubt it. 2019 is not 2004; the internet is not what it used to be, and neither are we as players. We know this game in and out — the bosses, the zones and the spells. We’ve lost that small part of us that made us want to explore so fervently 15 years ago.

So can we reprogram ourselves, forget what we know, recapture the childlike whimsy we had back in 2004? Can we enjoy “WoW Classic” as a catharsis?

I don’t think this will be the case for most players.  Most will play the game for a month or two and realize the all important end-game is thin and repetitive causing subscriber numbers to fall.

Only those who can accept the tenets of 2004, bathe in the Usher jams, embrace the terrible memes and sacrifice themselves on the altar of nostalgia will enjoy this new iteration trying to survive the test of time.