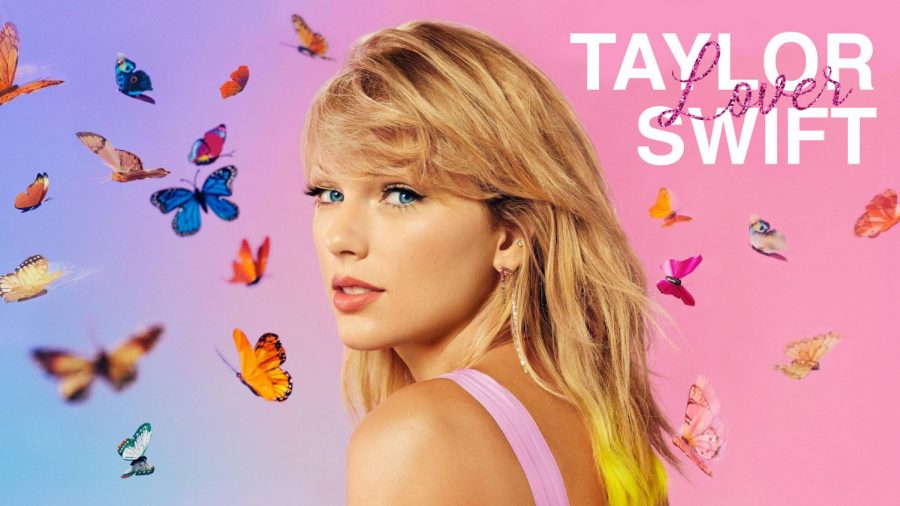 Taylor Swift during her photoshoot for the Apple Music Lab promotion.

The lyrics to the closing track, “Daylight,” are essential to Swift’s recent transformation from her previous album “reputation”; “Lover” is an album determined to defy the status quo by replacing her previous eviscerating break-up ballads with whimsical odes to her lover, all while challenging the expectations stacked against her.

The central theme of “reputation” was Swift’s ability to take control of her narrative. In  “reputation,” Swift portrayed herself as a fearless combatant rather than a courteous objector in the wake of media backlash and celebrity backstabbing.

In “Lover,” she emerges from the darkness unbroken, unbothered and enamored with her reinvented identity.

She establishes this within the opening track, “I Forgot That You Existed,” a song centered around the summer preceding “reputation,” — this time with a new perspective. Instead of penning a diss track, Swift takes the opportunity to boast “it isn’t love, it isn’t hate: it’s indifference,” a phrase that encapsulates the emotional maturity she exudes in “Lover.”

Such maturity is evident in her more vulnerable songs such as “The Archer,” which alludes to the anxieties Swift faces with her lover, and “Cornelia Street,” a ballad that lays Swift’s insecurities bare. “Back when we were card sharks, playing games. I thought you were leading me on. I packed my bags, left Cornelia Street. Before you even knew I was gone,” a sad Swift recalls.

In both songs, one element is constant: fear. While Swift does zero-in on happier times with boastful confidence, she also details moments of doubt and insecurity with the same energy.

Nothing is more personal than the banjo-inspired ballad that is “Soon You’ll Get Better.” From the crack in her voice when she sings “if there’s no you” to the heavy sigh at the end of the bridge, Swift spares no detail in describing her own emotional battle with her mother’s fight against cancer.

“Soon You’ll Get Better” competes with former Swift-classics such as “All Too Well,” “White Horse” and “Never Grow Up,” songs that used precise detail to tell a vulnerable and emotionally compelling story.

While similar in theme, these songs’ sound is a stark contrast to the head-nodding bops scattered throughout the 18-track album. “I Think He Knows” is a bass-heavy, synth-pop perfection. Complete with lyrical repetition and radiant optimism, it’s comparable to previously released songs “ME!” and “You Need To Calm Down,” but the lyrical variation in “I Think He Knows” makes the former two songs look like child’s play.

Even “Paper Rings” has Swift crossing into new territory. For an album full of soft ballads and sunshine pop, “Paper Rings” is a bouncy, punk-pop anthem buzzing with hints of “Katrina & The Waves” and early 2000s pop.

Swift remains candid in her description of her first encounter with current boyfriend Joe Alwyn. “The moon is high like your friends were the night that we first met, went home and tried to stalk you on the internet,” she lulls.

Although the sound is unfamiliar, the concept isn’t foreign to Swift. In her fourth studio album, “Red,” she often described moments of pure bliss through a romantic lens. Songs such as “Stay, Stay, Stay,” “Starlight” and “State of Grace” are glaring examples of Swift’s exemplary execution of a romantic theme, anchoring them with descriptive memories just as she does in “Paper Rings.”

Looking at Swift’s previous work in retrospect reveals yet another anomaly of this album: Swift is no longer looking to the past.

For an artist known for rehashing her past in her music, “Lover” redirects Swift’s sights toward the future. Many times Swift would find herself caught in the antics of a breakup, too distracted by her memories to recognize the potential ahead.

“Lover” is the culmination of these realizations — 13 years worth to be precise. From the heartbreak that reverberated through albums like “Red” and “Speak Now” to the backstabbing that spotlighted “reputation,” all the lessons Swift has learned finally hit home in an album about embracing the emotional rollercoaster that is love while simultaneously challenging the notion of love itself.

The most important takeaway is Swift’s ability to love herself as she is, without looking through the critical gaze others have had.

Swift said it best: “You gotta step into the daylight and let it go.”

And that she did.

Before the release of “Lover,” Swift learned that the record label under which she’d recorded all of her previous hits had sold to an industry player she despises. Manager Scooter Braun bought Big Machine Label Group, which afforded him Swift’s six-album catalog and ensured she would not own her own master recordings.

A devastated Swift took to social media to express her disdain, and while she was met with support from artists such as Camila Cabello and Kelly Clarkson, Swift did not prevail in earning back masters.

Although bitter, Swift did what she does best. She wrote a song about it.

In “The Man” she addresses how the public is quick to criticize her, but if she was a man, how they would praise her.

“I’d be a fearless leader, I’d be an alpha-type. When everyone believes ya, what’s that like?” Swift spouts before leaping into a Braun-centered chorus.

“I’m so sick of running as fast as I can. Wondering if I could get there quicker if I was a man,” bellows an agitated Swift, who was disappointed that she wasn’t offered her masters before Braun bought the company. Swift wanted to purchase her masters, but was never given the opportunity before Braun’s meeting with Big Machine Label Group.

“The Man” only reaffirms something Swift has accomplished throughout her career: her ability to generalize specific moments in her life in a way others can relate to.

While she targets Braun in “The Man,” she manages to compose a feminist anthem complete with the woes of feeling inferior while attempting to be assertive.

This isn’t the only instance in which Swift pens a political point-of-view. In “Miss Americana and The Heartbreak Prince,” she alludes to the current state of affairs in America and how it alters her perception of reality. “American glory, faded before me. Now I’m feeling hopeless, ripped up my prom dress,” a sad Swift croons.

It’s important to note the similarities in imagery between “Miss Americana and The Heartbreak Prince” and her former hit-single “You Belong With Me.” From mean homecoming queens to haunting memories of marching bands, Swift concludes how her reality at 18 was altered by her idea of the “American Dream” and how now, at 29, she has a firmer grasp on reality.

With that firmer grasp comes new responsibility. In multiple interviews Swift affirms she has new obligations as a songwriter and a celebrity, and she vows to be more vocal in the 2020 presidential election.

Yet, it’s all tied into “Lover,” an album echoing what “reputation” attempts to scream: “The old Taylor is dead.”

While she may be dead, it’s for the best; for a new emboldened, passionate and conscientious Taylor has risen from the ashes.