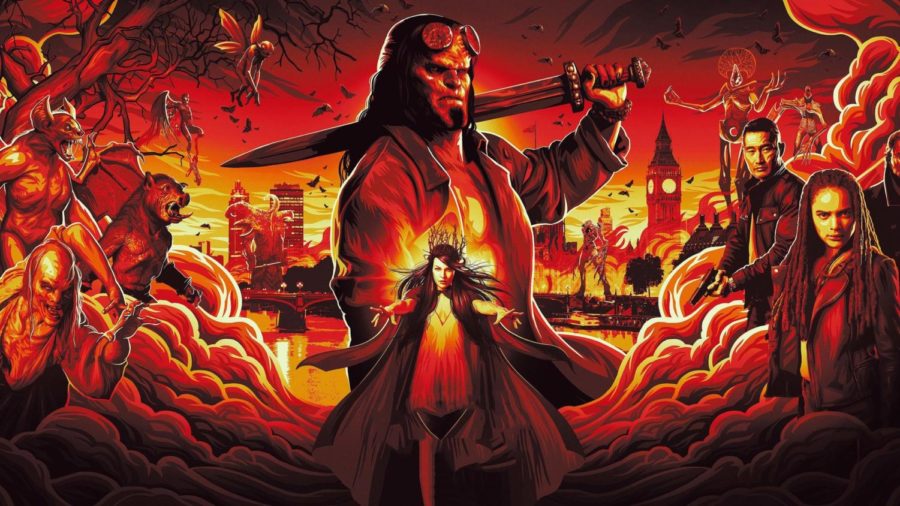 This unnecessary reboot hammers you over the head with its loud and obnoxious score, grueling pacing and grotesque, cartoonish violence. “Hellboy” lurks in the shadow of its predecessors and struggles to find its audience.

The film takes place in a world where the supernatural is the biggest threat to humanity, and Hellboy, a red-skinned man-demon with a large stone fist fights the things that go bump in the night.

David Harbour of “Stranger Things” fame stars as the titular character. Hellboy is a hard-drinking paranormal investigator with a sense of humor and nonchalant attitude. Harbour finds a way to distance himself from the original 2004 Hellboy, Ron Perlman. Harbour’s take on the character is boorish and whiny with moments of melancholy that play to his character’s inner darkness. Perlman’s Hellboy is sarcastic, charismatic and misunderstood.

For most of the film, Hellboy is the punching bag of both humans and monsters and steadily becomes unhappy with the human world that scorns him. His sadness is palpable, especially when he struggles with deciphering his purpose.

David Harbour is the strongest part of “Hellboy.” It’s clear he poured himself into the role, despite the mess created by production company Lionsgate.

The film’s initial sin is a rocky opening scene which starts with an exposition drop as Ian McShane narrates the backstory of the primary antagonist, the Blood Queen (Milla Jovovich).

This is perhaps one of the worst opening sequences to a comic book movie ever. Whoever was in charge of the sound design broke the knob, because not only this is scene, but most action sequences are paired with deafening guitar riffs.

Jovovich’s performance as the Blood Queen is embarrassingly hammy; she spends most of her on-screen time chewing the scenery like it’s an on-set buffet.

There is little room for character development in “Hellboy,” as this film is on a high-speed locomotive bound for Hell. Viewers are given no reason to feel anything for the slew of characters massacred on screen. Beyond Hellboy himself, compatriots Alice Monaghan (Sasha Lane) and Ben Daimio (Daniel Dae Kim) are some of the only characters given any time to shine.

The violence, the most prevalent aspect of the film, is grotesque and cartoonish. Faces are ripped off, bodies are skewered, limbs are torn asunder and tossed aside like used tissue paper. From start to finish, “Hellboy” is a gore-fest unlike any superhero movie out there; fans of R-rated kick-ass violence will enjoy every moment of bloody gratuity.

Let’s talk CGI, because “Hellboy” is a computer-generated circus with countless monsters slavering on screen, butchering innocents like it’s going out of style. Some creatures are thrilling to watch, like the infamous Baba Yaga, a one-eyed Russian witch who lives in a creepy house that walks on giant chicken legs. Whatever sorcery the film-makers used to bring Baba Yaga to life harkens back to the practical effects of director Guillermo Del Toro’s version of Hellboy. She is bony, decrepit, absolutely disgusting and the best creature the film has to offer. Too bad she’s only in one scene.

Despite its rancorous score, “Hellboy” is a sleep-inducing snore-fest without any of the heart that went into Del Toro’s 2004 version, and it’s no wonder my Saturday night screening was devoid of any other movie-goers.

If you’ve come for the bloody violence and the big red guy, you might be pleased; but if you were hoping for a half-decent reboot of “Hellboy,” you’ll leave deafened and disappointed.