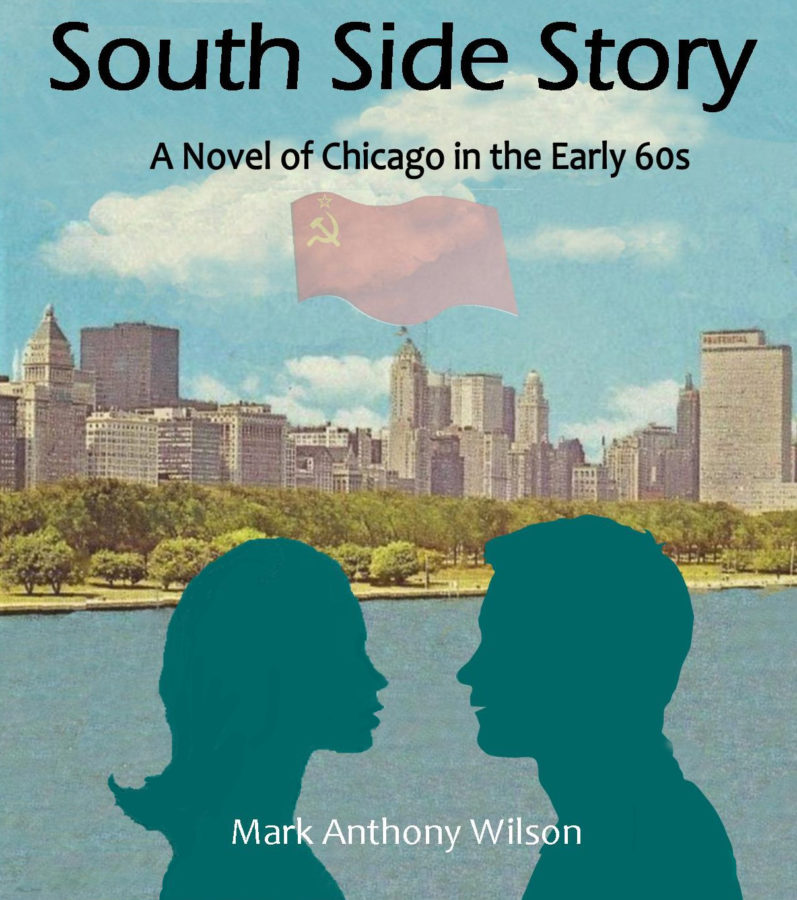 The novel, available on Amazon Kindle, centers on the story of a young teen navigating through personal struggles in Chicago under the backdrop of the Civil Rights Movement and the Cuban Missile Crisis in the early 1960s.

“This is a story that should be read because it connects to many events we see today,” said SRJC student Amanda Solar.

Though simple in prose and slow to start, “South Side Story” emanates emotion from deep within its marrow. The realistic portrayal of living under the shadow of a powerful parent wracked by bouts of mental illness is true to the core, and the protagonist’s expression of regret for failing to live up to love’s expectations is deeply saddening.

Raised by struggling artists amid the industrial decay of ‘60s Chicago, the protagonist, William struggles to thrive emotionally and intellectually. It is this very dilemma that first attracts his love interest, the Russian immigrant Natalia and that drives a wedge between him and his very good friend. These conflicts are what drive the story.

The plain and simple dialogue nonetheless sucks the reader in with its narrative power. Personal struggles weave seamlessly into the story of the times, speaking to anyone living in a society troubled by social and political problems without precedent.

It’s these socio-political experiences that form the foundation of the novel. The way the Wilson depicts the inner battles concerning the intersectionality of race, class, ethnicity and gender makes this novel very timely and revealing.

“Since we’re seeing these same issues play out in our society over the past few years, I decided it was the right time to publish this novel,” Wilson said. His novel addresses racism, urban poverty, mental illness, officer-involved shootings, immigration, nuclear missiles and much more.

“This novel is rich with the sights and sounds and smells of the South Side of Chicago in the early 60’s that surround the troubled coming of age of young William Wolfson,” said Dr. Sarah Gill, an SRJC art history instructor.

Wilson, born and raised in the south side of Chicago, has lived in Berkeley, Calif. since 1969. He has written five books about 19th and 20th century American architecture and history:

His journey to Cuba in the 2000s, in particular, caused quite a stir, when Wilson travelled to the country, evading the embargo only to end up taking part in a televised international conference on climate change during the Bush years.

When he was still a teen, Wilson produced a handmade underground newspaper that he distributed to his classmates once a week, until the administration effectively banned it.

Wilson has taught art history classes for 22 years starting in the late ‘70s. He received his bachelor’s degree in history from the University of California, Berkeley.

“That degree and 50 cents will get you a ride on BART,” Wilson said.

He then earned his master’s at California State University, East Bay with a thesis on the history of architecture. He continues to commute from Berkeley to both SRJC Petaluma and Santa Rosa campuses as an adjunct instructor.

“I like coming up here,” Wilson said. “I like that there is a broad variety of life experience being brought to the classroom. And that’s what art is all about: How you perceive reality, in your own life, and the lives of others. It’s learning to see the world.”

One of the things he loves best about teaching art history is showing students how to use the artists’ visions and ideas to better understand our own lives and the world around us.

Another part of the work he enjoys is hearing the stories of the obstacles artists have overcome just to get a chance to create their work.

“I was raised by two freelance artists. I know the struggle. I know what it’s like to go to bed hungry,” Wilson said.

His favorite story of struggle is that of Julia Morgan, one of America’s very first female architects. She applied to the all-male architecture program at the Ecole Beaux Arts multiple times, each time being brutally rejected on the basis of gender. On the third time, after she would not take no for an answer, Morgan was allowed the rare opportunity to study her craft. During her career, she was a pioneer in green design, built structures that survived the 1906 earthquake and completed more than 750 structures, 200 more than Frank Lloyd Wright.

Wilson has researched and written extensively on Morgan, both for his book on the subject and for work in academia. For his book, Wilson and a photographer documented many Morgan sites around the Bay Area, including four houses in Petaluma the famed architect designed. These are private residences, so although it’s possible to see the buildings, it is unlikely visitors are allowed inside.

Another such site in Sonoma County is the Chapel of the Chimes in Santa Rosa.  Though designed by Lazer Neusbaum, it was directly inspired by Morgan. The Chapel of the Chimes, like many other Morgan-styled works, features a diversity of religious iconography, which was very unusual in the 1920s and ‘30s. It is open for visitors interested in its history or architecture weekdays from 9 a.m. to 5 p.m.

Wilson, despite an accomplished and talented literary and academic resume, is nonetheless still an adjunct instructor after teaching at SRJC for 22 years.

He finds it interesting that instructors almost had to have a strike for a modest pay raise to cover the cost of living, and yet there are many things the college seems to find money to spend on when they want to, Wilson said.

“I find it odd that we’re not in a recession, and yet this is the first year since the ‘Great Recession’ that they’re offering no in-person art history class this summer,” Wilson said. “Art gets less attention than it should. What gets cut first is always art, which is wrong because it is not just a luxury. It should not be considered less or more important than STEM.”

He added, “I think it was Julia Morgan’s teacher and mentor, Bernard Maybeck, who said it best, ‘Study everything. Study the whole world. Because we can all learn from each other.’”

Wilson’s next book will be a murder mystery set in the Bay Area in the early ‘90s. “The Open House Murders” is due to be available this summer on Amazon Kindle.

“South Side Story” is available on Amazon and Wilson’s other works are accessible from the author’s page.