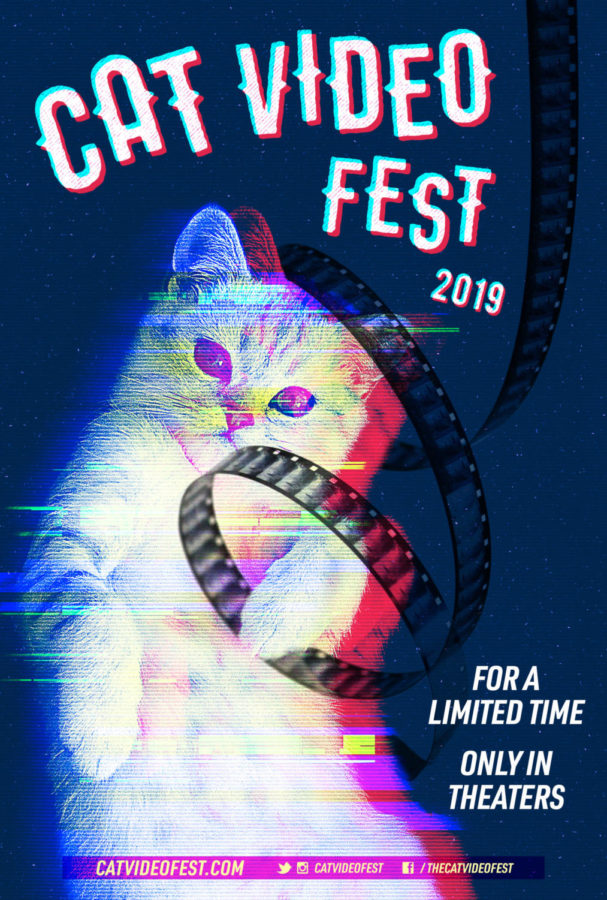 Summerfield Cinemas was the place to be Sunday if you like cats and were in the mood to have a good time. CatVideoFest 2019, a 70-minute compilation of laugh-out-loud cat video clips, played to three sold-out theaters during the course of the afternoon.

The festival is the highly successful brainchild of Seattle film producer Will Braden, known for his award-winning YouTube movie series featuring the existential musings of Henri, a morose French house cat. CatVideoFest raises money for numerous cat shelters and organizations and plays in dozens of venues throughout the United States each year.

John Preston, an employee at Summerfield Cinemas, said it was a busy day. “Each show is doing about 170, 180 [people],” he said.

When asked whether it was an unruly crowd, Preston replied, “No, very pawsitive.”

Forgotten Felines of Sonoma County raised money and awareness for its spay/neuter campaign for feral cats by selling and giving out merchandise at the event; their coloring books were particularly popular with young girls.

Ellen Petty, a volunteer manning Forgotten Felines’ table in the lobby, said, “It’s been incredible. This started as one show and then they added two more because it kept selling out.”

Local charity SNAP Cats also made an appearance during the afternoon but left early when the hubbub proved too much for their three special-needs kitties.

While an admirable number of crazy cat guys showed up for the festival, the majority of attendees were women and children.

The movie was broken up into sections by subject and consisted of a string of predictably cute back-to-back video clips of cats caught on camera in the midst of outrageous acts, from chasing an unwitting bear up a tree to unsuccessfully escaping a squeaking litter of newborn kittens.

The audience laughed for all 70 minutes.

Oskar the Blind Cat, who developed a following of millions of viewers on YouTube, Facebook and Instagram, proved especially popular with the crowd, as did the kitty whose owner trained him to fall over when he pointed at him and said, “Bang!”

The Japanese village of Aoshima, also known as Cat Island, was one of the few serious segments in the film. A virtual ghost town with only 13 residents and 120 feral felines, Aoshima has in recent years become a major destination for cat lovers from around the world. The locals believe their kindness to the cats brought them good luck and now consider the felines their mascots.

What were people’s favorite clips?

Ciaffa said, “I really liked the well-curated one with the cat speaking French,” referring to producer Braden’s work with Henri, the French house cat.

SRJC student Kamryn Trinkino said, “I was impressed that there were a lot of cat videos that I hadn’t seen. There were so many kitten ones!”

Would they come back next year?