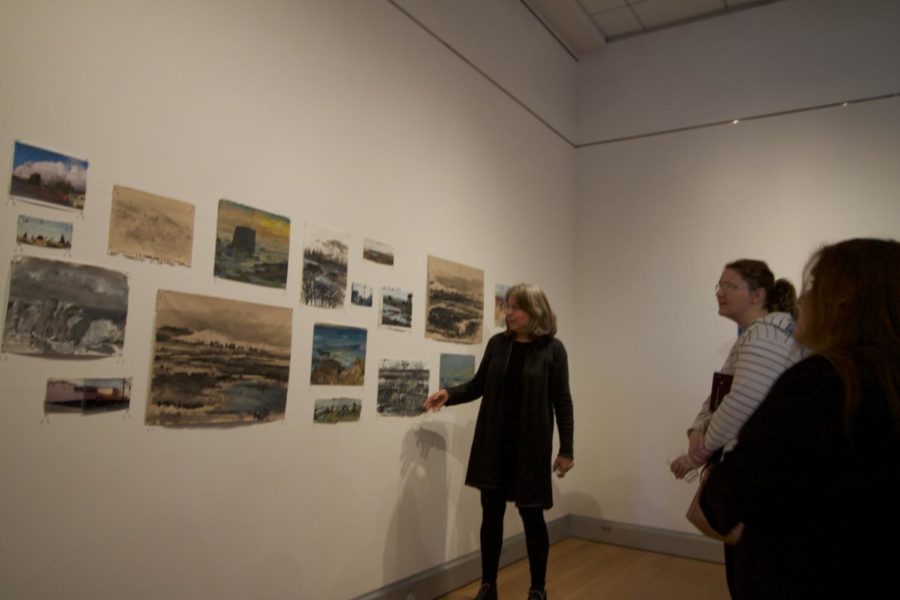 The Robert F. Agrella Art Gallery hosted an opening for “Meanderings: Sabbatical Exhibition,” a show featuring paintings by Stephanie Sanchez inspired by her her travels around the United States. The opening also included a second, collaborative show, “Parallels,” which also features travel-inspired work.

Sanchez, a full time art instructor at Santa Rosa Junior College, used a single-semester sabbatical to travel to different locations across the country, painting each landscape she encountered. Her travels inspired not only the work, but also the show’s title.

“I looked [Meanderings] up in the dictionary. It described on what I was doing,” Sanchez said. According to the Merriam-Webster dictionary, to “meander” is to wander at random.

Sanchez’s artwork showcases landscapes of real-life locations, from the rocky mountains of Southern California to the swamp-like landscapes of Florida. The pieces feature cool-toned or monochromatic color schemes.

“This is a great opportunity for people to see a recent body of work by Stephanie Sanchez,” said Deborah Kirklin, another SRJC art instructor whose work is shown in “Parallels.”

Sanchez said she hopes breathing life into her artwork will make any person in any field — not just those who study art — appreciate the painting. She sees art as useful for everyone.

“Any of the disciplines you study, if you take an art class it opens your mind in a way you don’t expect,” Sanchez said.

As for Kirklin, “It’s wonderful to be included in a group show in which the artists are engaged in seeing and working from life.”

Both exhibitions are open at the Robert F. Agrella Art Gallery on SRJC’s Santa Rosa campus until March 28. The gallery is open from 10:00 a.m. to 2:00 p.m. Monday through Thursday.