For the laughs to the lighting, go see “All The Great Books (Abridged)” 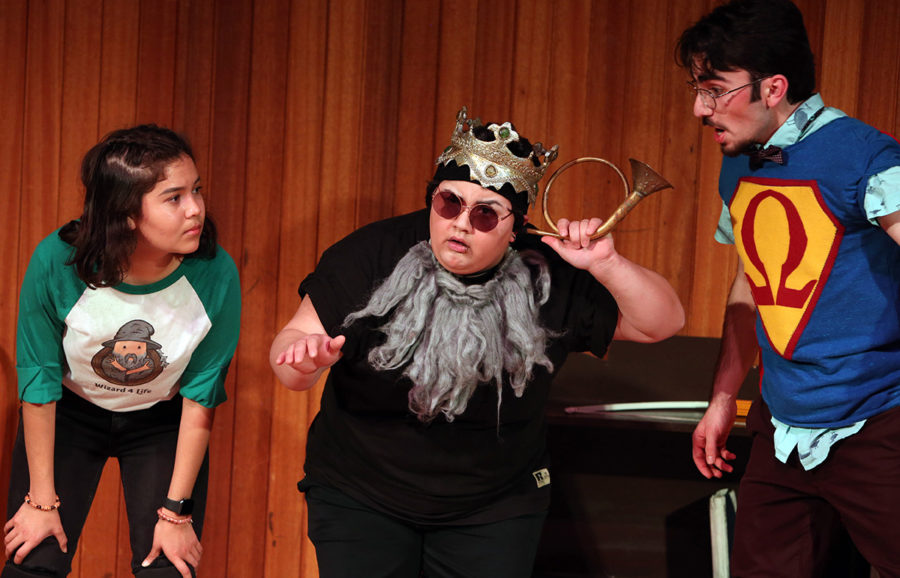 Santa Rosa Junior College’s production of “All the Great Books (Abridged)” is an interactive and hilarious experience that amounts to a must-see show. I was expecting a simple comedy, but what I got was a magical tour of all the great books I should have read in high school.

The main cast includes Alexx Valdez, Christopher Shayota and Jasmine Flores-Nunez playing a high school coach, theater professor and student-teacher who help a group of high school students — the audience — graduate. A test is held during intermission, and at the end, a diploma is thrown to the audience.

Improvisation is a big part of the show. The cast’s ability to play off each other and the audience makes the show unforgettable. Yes, the show is scripted, but depending on how the audience reacts, the actors fiddle with it, either emphasizing their lines or prolonging a joke by a line or two.

“All the Great Books (Abridged)” is similar, in a way, to stand-up comedy because of how the actors read the audience and tailor their lines accordingly. The cast’s talent for reading their audience makes the improvisation the best part of this comedy.

Audience participation is also crucial to the show’s schtick. Many of its jokes and skits need the help of audience members to work, like when the audience is asked to sneeze each time the coach says the name of a particular author.

The show has no single star nor an actor who steals it; instead, the cast’s talent is balanced.

Valdez’s interpretation of a high school coach is sometimes over the top. He shines during the review of “War and Peace” and as the host of a female author dating game where one of the three female contestants is an audience member.

Even when the theater professor (Shayota) is alone onstage, he makes you laugh, and when he interacts with the rest of the cast, the laughter is unstoppable.

Of all the actors, Flores-Nunez used the audience most in her role as the student-teacher, going as far as turning the audience itself into a secondary character, as with the sneezing bit.

Secondary characters played by the rest of the cast are hilarious in their own right and are used primarily as props in the show. This technique shines brightest when the show takes on “Don Quixote”, and a cast member becomes Spanish translator for Don Quixote himself, and “The Iliad,” when they play the role of the horse.

The cast stumbled here and there with its lines, but it didn’t hurt the experience. Instead, it added to the general sense of improv and seemed natural for the characters. As the show went on, and as the cast seemed more comfortable in their roles, their lines flowed much more smoothly.

The set is simple, featuring only a bookshelf, chair and whiteboard, but the crew turned this simplistic set into a magical wonderland through lighting tricks and techniques.

Whenever the tone of the play changed, the crew used spotlights and color changes to reflect the different moods. At one point they used the auditorium’s lights to replicate a cannon fire. The “Jaws” fishing scene utilized a blue light filter, and the “Ulysses” section featured hard spotlights on Flores-Nunez, Shayota and Valdez.

So considering everything from the lighting to the laughs, and regardless of whether you need a refresher on high school literature, “All the Great Books (Abridged)” is a great show everyone should see. It runs from March 9 to March 17 at in the Santa Rosa campus’s Newman Auditorium at 1501 Mendocino Ave.