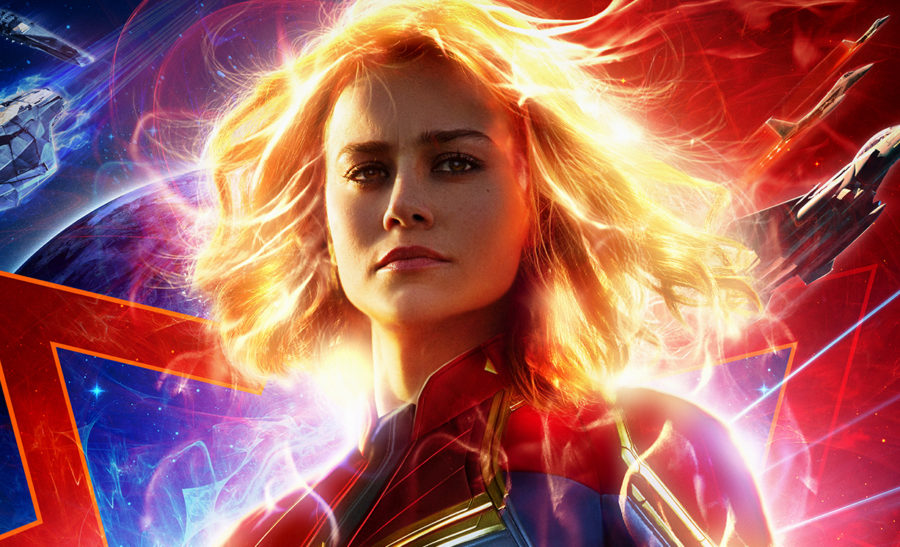 Despite the doomsaying of Internet trolls, Brie Larson knocks it out of the park, delivering a fun, snarky portrayal as the titular Captain Marvel.

The majority of the film takes place on Earth in the mid-90s, years before any of the other Marvel films besides “Captain America: The First Avenger.” Larson plays Carol Danvers, introduced as a Kree warrior named Vers, who’s serving as a special forces soldier on the Kree homeworld, Hala.

Some astute audience members will recognize the Kree as a race of mostly blue-skinned individuals introduced in “Guardians of the Galaxy Vol. 1.” Two characters from that film make appearances as younger versions of themselves: Korath the Pursuer and Ronan the Accuser.

The weakest moments are in the first 20 minutes of the film as Danvers works with her Kree commander Yon-Rogg (Jude Law), to fight an alien race known as the Skrulls. Not until Danvers finds herself stranded on Earth does the film really start to pick up.

“Captain Marvel” is lovingly drenched in ‘90s pop culture, like in the very first scene on Earth when she crash lands into a Blockbuster Video — a sorely missed relic of a bygone era.

On Earth, Danvers continues to fight the Skrulls — shapeshifting, pointy-eared and green-skinned aliens. They prove to be far more interesting than the typical Marvel baddies as they are able to take the form of any humanoid they’ve seen, becoming a perfect copy right down to the DNA.

As Danvers, Larson is a strong-willed soldier struggling with vague memories of a life she once had on Earth. The Kree are cold and calculating and her commander, Jude Law, preaches that emotions get in the way of judgment.

But her emotions are what make Larson’s performance so likable.

Throughout the film, flashbacks show moments of her past where she faced adversity and failed miserably. But everytime she got right back up and kept trying, embodying the human spirit.

She didn’t just prove that she can do it, she showed that all women are forces to be reckoned with.

One of the best scenes features a fully-powered Carol Danvers fighting to the tune of “I’m Just a Girl,” by No Doubt, quite possibly the perfect song for the occasion.

Danvers, aka Captain Marvel, is no ordinary human. She possesses super strength and endurance, and the uncanny ability to fire photon blasts from her hands. Larson’s take on these powers is fun and relatable. She clearly enjoys pulverizing Skrulls with superpowered punches and showing off her flashy, cosmic rays. A feat anybody would enjoy.

Samuel L. Jackson stars alongside Larson as a younger Nick Fury—a staple of the Marvel Cinematic Universe. As usual, Jackson as Fury is cool and likable, but this time without the experience he’s not too hardened to pick up a cat and lovingly pet it until Larson snaps him back into reality.

The strength of their chemistry drives the dialogue of the movie. It would be no surprise to find out Larson and Jackson are best friends forever off-set now, on screen their rapport is some of the best in the MCU so far.

“Captain Marvel” is one of the best solo Marvel movies, period. The story is unlike any of the others, as it takes a twist on the origin story, and almost goes in reverse as Danvers discovers who she was and becomes something more.

The most exciting fact is she’s going to return next month in “Avengers: Endgame,” joining the original Avengers in their final fight against Thanos. There’s no doubt that Larson will be able to keep up the momentum and prove herself worthy of the title of “Avenger.”