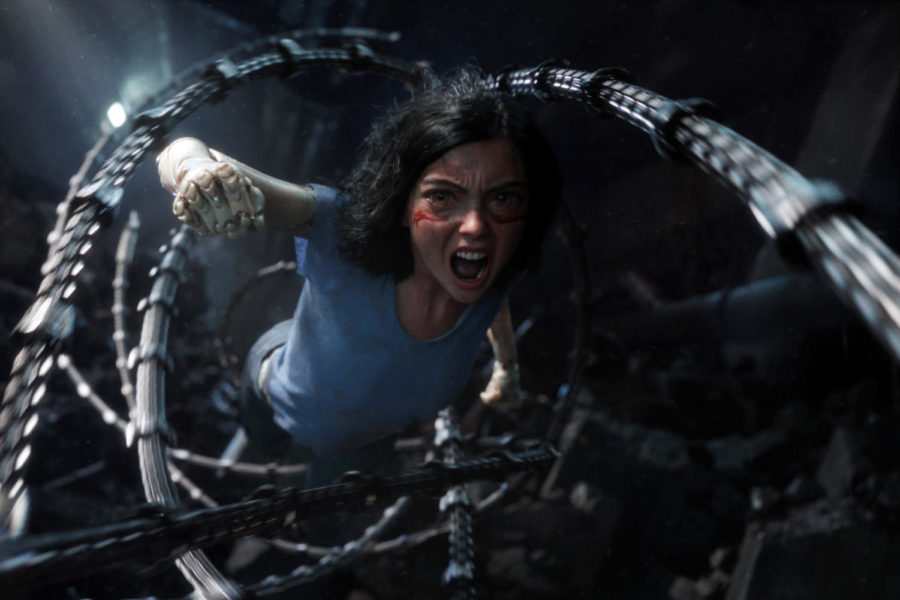 James Cameron and Robert Rodriguez may have turned an obscure manga series into a beautiful, eye-popping sci-fi blockbuster, but leading actress Rosie Salazar steals the show.

Fans of action, sci-fi and anime should all see “Alita: Battle Angel.” The film’s action sequences are on par with some of the best Marvel movies, its scope and world-building reminiscent of “Bladerunner” and the film is loyal to the source material, never shying away from its manga origins.

“Alita: Battle Angel” is based on the 1990 Japanese cyberpunk manga called “Battle Angel Alita” by Yukito Kishiro. The story takes place in the distant future, the 26th century, to be exact. Earth has been ravaged by a war known as “The Fall,” and the only remaining bastion of mankind is Iron City, an amalgamation of Earth cultures huddled beneath the great, floating sky-city Zolum. Denizens of Iron City are never allowed to enter Zolum, as it is only for the most elite individuals. The rest of mankind is left to live in the squalor of Iron City — typical for dystopian societies in the science fiction genre.

Dyson Ido, played by Christoph Waltz, is a “cyberphysician,” a doctor who specializes in operations on cyborgs. He finds Alita’s head and torso in a junkyard; anything that falls from Zolum ends up in the scrap heaps of Iron City. He connects her found pieces to a special high-end robotic body.

Alita, played by Salazar, is a young woman with a fully cybernetic body — the only part of her that is still human is her brain. Within her lies an extremely advanced core, her heart, capable of powering their entire city for years. This core is what makes her so special, or so it seems.

Alita is a joyfully naive character throughout the film; watching her experience Iron City firsthand is cute, endearing and audiences experience it vicariously along with her. She is mesmerized by the mish-mash of human cultures living in the city; she’s enthralled by the brutal sport of “motorball,” a deadly game of high-speed roller derby played by gladiator-like cyborgs.

One of the key plot points is the relationship shared between Ido and Alita. He acts as her father figure and she, his surrogate daughter, brings new purpose to his life.

But her innocence is only half of her character.

“Battle angel,” isn’t just a clever moniker. Alita is trained in a lethal martial art utilizing the full capability of her cybernetic body — the source of her training one of the film’s major plot points. She is unmistakably drawn to conflict and has a steadfast morality against evil. In a sense, she is an angel of battle sent to protect those who cannot protect themselves, making for a strong female character for both men and women to admire.

Producer James Cameron and director Robert Rodriguez worked to bring Alita to the big screen for 19 years, and the work definitely paid off.

The movie features some of the finest CGI work of the decade, putting Cameron’s “Avatar” to shame. Cybernetic characters are intricately designed and never look cartoonish. The motion-capture technology used on Salazar to create Alita is impressive, to say the least. From her angelic face with big, brown eyes to her cybernetic body, she is a masterpiece of CGI magic.

Being fully motion-captured, Alita is able to perform inhuman feats of dexterity and power staying true to the source material. She pulls no punches and squashes her enemies like bugs.

The film’s weaknesses are found in the spotty dialogue, mostly delivered by Alita’s human love interested Hugo, played by Keean Johnson. Some moments in the film are too dramatic, and Alita’s quick reactions in anger could be smoother. Terms like “metallurgy,” “berserker” and “URM” are thrown around often; it might seem too wordy for some audiences.

The film creates interesting lore and compelling dystopian future but shrouds much of the greater story in mystery as it obviously sets itself up for a sequel, if not two. Crucial story elements are left for further development in the inevitable sequel; while that is something to look forward to, the film could have benefited from developing Alita’s backstory more.